US sanctions Russia for ‘beginning’ invasion of Ukraine 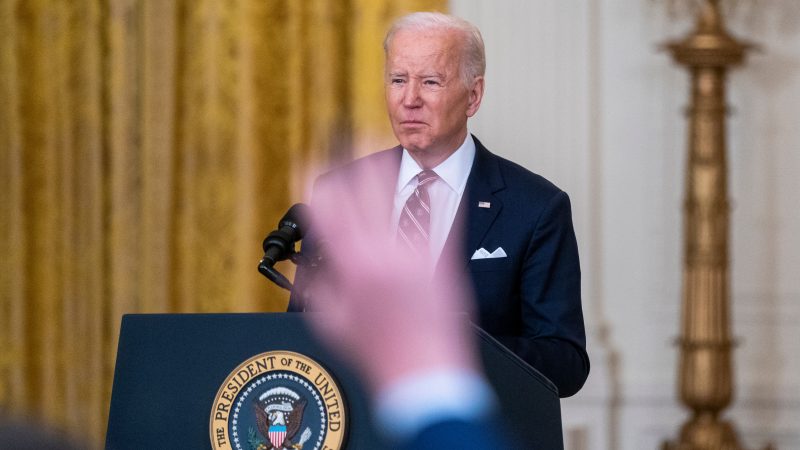 A journalists raises his hand as President Joe Biden concludes his remarks on the US response to the escalation on the Ukraine-Russian border during a speech in the East Room of the White House in Washington, DC, USA, 22 February 2022. Biden took no questions. [EPA-EFE/SHAWN THEW]

US President Joe Biden on Tuesday (22 February) announced tough new sanctions on Russia for “beginning” an invasion of Ukraine but said there was still time to avoid war, even as Vladimir Putin signaled plans to send troops beyond Russia’s borders.

Biden announced what he called the “first tranche” of sanctions, including steps to starve Russia of financing and target financial institutions and its “elites.”

Today, I announced the first tranche of sanctions in response to Russia’s actions in Ukraine. And if Russia goes further with this invasion, we stand prepared to take further steps as necessary. pic.twitter.com/8t87wyMq6q

But he left the door open to a final effort at diplomacy to avert a bloody full-scale Russian invasion.

“There’s no question that Russia is the aggressor, so we’re clear eyed about the challenges we’re facing,” the president said.

“Nonetheless, there is still time to avert the worst case scenario that will bring untold suffering to millions of people.”

Biden’s address followed a wave of sanctions announced by Britain and the European Union, after Putin recognized the self-declared Donetsk and Lugansk rebel republics. 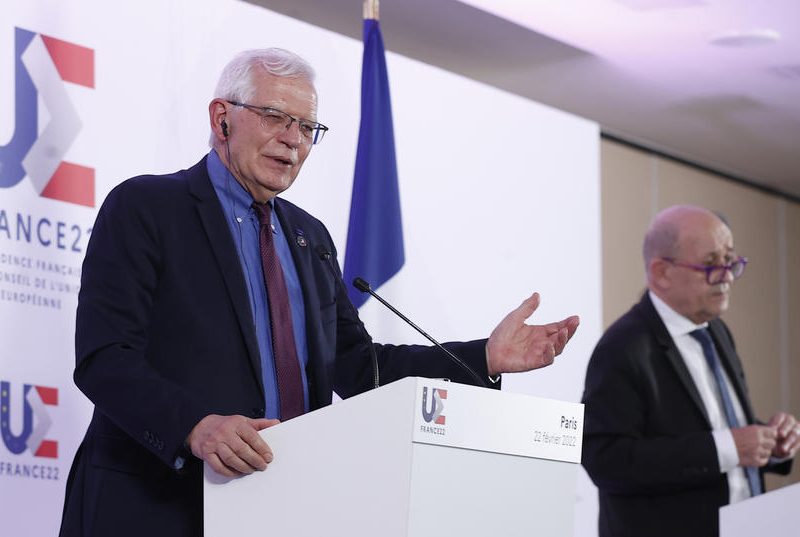 Germany also announced it was halting certification of the Nord Stream 2 gas pipeline from Russia.

The United States deployed its most powerful sanctioning tool, placing Russian elites and two banks on the Specially Designated Nationals list, effectively kicking them out of the US banking system, banning them from trading with Americans, and freezing their US assets.

Biden said the sanctions in the initial tranche applied to VEB bank and Russia’s military bank – Promsvyazbank, which does defense deals. He said the sanctions against Russia’s sovereign debt meant the Russian government would be cut off from Western financing.

“As Russia contemplates its next move, we have our next move prepared as well,” Biden said. “Russia will pay an even steeper price if it continues its aggression, including additional sanctions.”

Putin did not watch Biden’s speech and Russia will first look at what the United States has outlined before responding, according to Kremlin spokesperson Dmitry Peskov, cited by Russian news agencies.

Biden said the United States would continue to provide “defensive assistance” to Ukraine but had no intention of fighting Russia. He said he authorized additional movements of US forces already stationed in Europe to strengthen Baltic allies Estonia, Latvia and Lithuania.

Biden, who is facing concerns at home about inflation and high energy prices, said his administration was closely monitoring energy supplies for disruptions and working on a “collective investment to secure stability and global energy supplies” with major oil producers and consumers.

“This will blunt gas prices. I want to limit the pain the American people are feeling at the gas pump. This is critical to me,” he said.

On Monday a senior administration official said Russia sending troops to the breakaway regions of Donetsk and Lugansk in Ukraine did not represent a further invasion because Russia had troops there previously. But on Tuesday, White House officials changed their language to say an invasion had begun.

Washington slapped sanctions on VEB and Promsvyazbank Public Joint Stock Company, as well as 42 of their subsidiaries, accusing the two banks of being “state-owned institutions that play specific roles to prop up Russia’s defense capability and its economy.”

The sanctions on the banks come on top of designations of Russian “elites” the Treasury Department accused of being close to Putin, including Aleksandr Bortnikov, director of the Federal Security Service (FSB), and Petr Fradkov, the chairman and chief executive of Promsvyazbank Public Joint Stock Company.

Also hit with sanctions was Sergei Kiriyenko, a former prime minister of Russia.

“They share in the corrupt gains of the Kremlin policies and should share in the pain as well,” Biden said of Russian elites.

Brian O’Toole, a former Treasury Department official now with the Atlantic Council, said Tuesday’s sanctions will have impact, but questioned whether it would be immediate enough.

“I think the risk they run by not going after a big state-owned commercial bank is that Putin thinks that the West is not going to be willing to bear the pain of big economic sanctions, and therefore that he can safely expand his ambitions,” he said.

Russia’s Sberbank and VTB  would face American sanctions if Moscow proceeds with its invasion of Ukraine, a senior US administration official told reporters.

The official also said Russian elites not sanctioned on Tuesday should be on notice and noted that the Biden administration was fully prepared to implement export control measures with a large number of countries if Russia invades further.

“Further Russian assault into Ukraine remains a severe threat in the days ahead,” Biden said. “The United States and our allies and partners remain open to diplomacy if it is serious.”