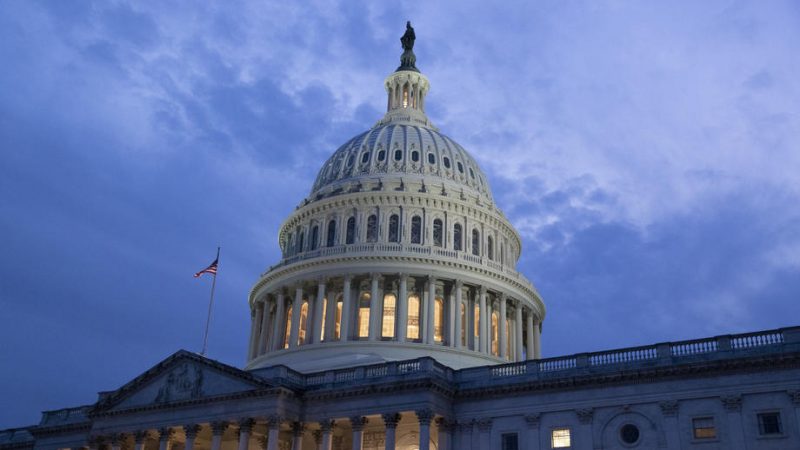 The United States Capitol is seen at dusk in Washington, DC, USA, 19 January 2022. The US Senate on 15 March 2022 unanimously passed a resolution condemning Russian President Vladimir Putin as a war criminal, a rare show of unity in the deeply divided Congress. [EPA-EFE/MICHAEL REYNOLDS]

The US Senate on Tuesday (15 March) unanimously passed a resolution condemning Russian President Vladimir Putin as a war criminal, a rare show of unity in the deeply divided Congress.

The resolution, introduced by Republican Senator Lindsey Graham and backed by senators of both parties, encouraged the International Criminal Court (ICC) in The Hague and other nations to target the Russian military in any investigation of war crimes committed during Russia’s invasion of Ukraine.

“All of us in this chamber joined together, with Democrats and Republicans, to say that Vladimir Putin cannot escape accountability for the atrocities committed against the Ukrainian people,” Democratic Senate Majority Leader Chuck Schumer said in a speech on the Senate floor ahead of the vote.

Russia calls its actions a “special military operation” to demilitarise and “denazify” Ukraine. Putin has also called the country a US colony with a puppet regime and no tradition of independent statehood.

Moscow has not captured any of the 10 biggest cities in the country following its incursion that began on 24 February, the largest assault on a European state since 1945.

The White House on Tuesday made light of Russia’s retaliatory sanctions against US officials, saying Moscow may have inadvertently sanctioned the deceased father of Joe Biden by omitting the suffix “junior” from the spelling of the US president’s name.

Russia said on Tuesday it had placed Biden, Defense Secretary Lloyd Austin, CIA chief William Burns, National Security Adviser Jake Sullivan, White House press secretary Jen Psaki and a handful of other US officials on a “stop list” that bars them from entering the country. Canadian Prime Minister Justin Trudeau has also been added to the ‘stop list’.

“President Biden is a junior so they may have sanctioned his dad, may he rest in peace” Psaki said. “None of us are planning tourist trips to Russia, none of us have bank accounts that we won’t be able to access, so we will forge ahead,” she added.

Aimed at retaliating against US sanctions imposed on Russia over its invasion of Ukraine, the move appeared largely symbolic, since Russia’s Foreign Ministry said it was maintaining official relations and if necessary would make sure that high-level contacts with the listed individuals could take place.

“I think we are confident that if we need to have … direct and indirect conversations with Russia we will be able to do that.”