US send Guantanamo prisoners to Slovakia 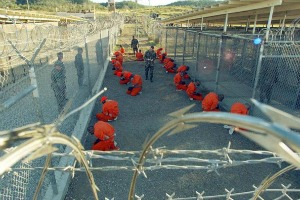 The United States is sending the three remaining ethnic Uighur Chinese inmates at the Guantanamo Bay detention center to Slovakia, the Pentagon said on 31 December, in the latest of a flow of transfers aimed at eventually shutting the controversial prison.

Yusef Abbas, Saidullah Khalik, and Hajiakbar Abdul Ghuper are the last of 22 Muslim minority Chinese nationals to be moved from the Guantanamo Bay military prison in Cuba, Rear Admiral John Kirby, a Pentagon spokesman, said in a statement.

"This transfer and resettlement constitutes a significant milestone in our effort to close the detention facility at Guantanamo Bay," Kirby said in a statement.

Slovakia's interior ministry confirmed that the central European country will take in the three Uighurs.

The European Union and NATO member first accepted three Guantanamo prisoners in 2010, and the ministry said the latest transfer is a continuation of an EU-U.S. agreement aimed at helping President Barack Obama close the prison.

"As in the first case, this is about transporting people who have never been suspected of nor charged with a criminal act of terrorism," the ministry said in a statement.

Kirby said the United States was grateful to Slovakia for its "humanitarian gesture."

Most of the Uighurs at Guantanamo were captured near the Pakistan-Afghanistan border in late 2001, and were believed to have trained with the Taliban. But U.S. officials have deemed that they pose no threat to the United States.

In 2008, a U.S. court ordered that they be released; some have been resettled in El Salvador, Switzerland, Bermuda, Albania, and the Pacific island nation of Palau.

China has demanded the Uighurs be returned to China, but the U.S. government says it will not do so because they would face persecution there.

Uighurs come from the restive mainly Muslim region of Xinjiang in the far west of China.

Obama has struggled to fulfill his 2009 promise to close Guantanamo detention center, which for many people symbolizes U.S. excesses in the years following the Sept. 11, 2001 attacks. Obama has been blocked in large part due to restrictions imposed by Congress.

Last week, Obama gave Congress credit for relaxing restrictions on transferring detainees from the U.S. prison at Guantanamo Bay to the custody of foreign governments, but said lawmakers needed to go further.

Congress has retained regulations that prevent the transfer of prisoners to American soil, where they could be tried in federal courts.

There are 155 detainees from various countries remaining at Guantanamo, many of them from Yemen. Most of them have never been charged. The administration has recently become more active in making transfers, sending two detainees each to Sudan, Saudi Arabia and Algeria.

0 responses to “US send Guantanamo prisoners to Slovakia”