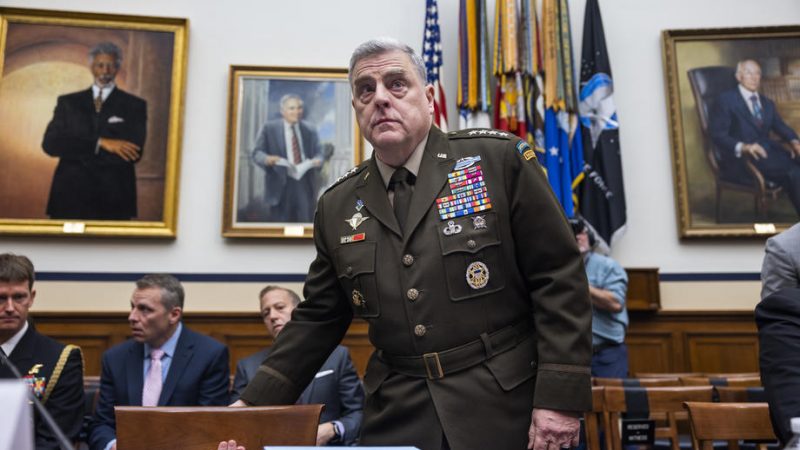 Chairman of the Joint Chiefs General Mark Milley prepares to testify before the House Committee on Armed Services in the Rayburn House Office Building in Washington, DC, USA, 5 April 2022. The two were scheduled to discuss their annual budget request but were asked repeatedly about Russia's invasion of Ukraine. [EPA-EFE/JIM LO SCALZO]

US Defense Secretary Lloyd Austin defended America’s response to the war in Ukraine on Tuesday (5 April) during a heated exchange with a Republican lawmaker who accused the Pentagon of over-estimating Russia’s military capability.

“Has it occurred to you that Russia has not overrun Ukraine because of what we’ve done? And our allies have done? Have you ever even thought about that?,” Austin asked rhetorically to Rep. Matt Gaetz during testimony to the House Armed Services Committee.

Austin and other US officials say US support to Ukrainian forces, along with Ukraine’s strong will to fight, has thwarted Russia’s plans for a swift victory in a campaign now in its sixth week.

General Mark Milley, the chairman of the Joint Chiefs of Staff, said that the conflict in Ukraine could last for years.

“I do think this is a very protracted conflict and I think it is at least measured in years,” Milley told lawmakers during the same hearing.

He added that “NATO, the United States, Ukraine and all of the allies and partners that are supporting Ukraine are going to be involved in this for quite some time.”

Russian-backed separatists have already been fighting in eastern Ukraine since 2014, a conflict which has killed about 15,000 people.

Milley undercut Republican claims that President Joe Biden could have effectively deterred Vladimir Putin from invading Ukraine, saying any meaningful pressure on the Russian leader would have led to armed hostilities between the former Cold War foes.

“I’m not sure he was deterrable,” Milley said of Putin, who ordered the unprovoked. “This has been a longstanding objective of his that goes back years.”

“The idea of deterring Putin from invading Ukraine, deterring him by the United States, would have required the commitment of US military forces, and I think that would have risked armed conflict with Russia, which I certainly wouldn’t have advised,” the general said.

Milley, the seasoned combat veteran who has come under fire repeatedly by Republicans for what they consider his perceived “wokeness,” was responding to questions from Rep. Scott DesJarlais during the previously scheduled House Armed Services Committee budget hearing. The Tennessee Republican followed on repeated questioning from other members of his party who claim foreign policy weakness from Biden – including the fallout from the disastrous withdrawal from Afghanistan – invited the timing of Putin’s invasion.