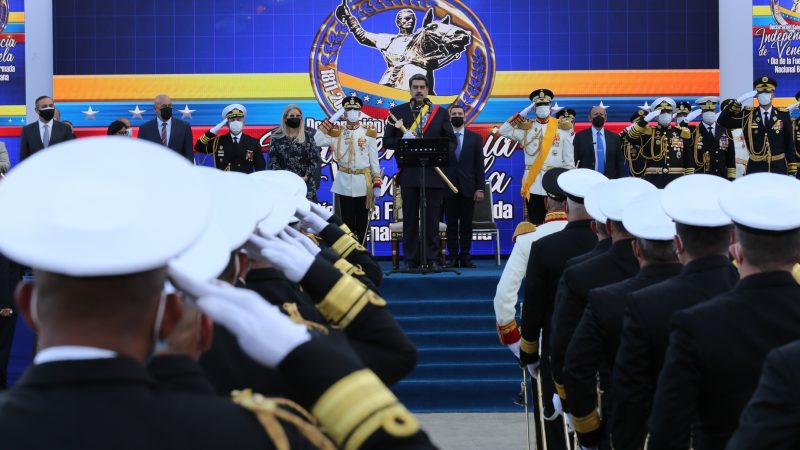 A handout photo made available by Miraflores Press shows Venezuelan President Nicolas Maduro during the celebration of the 210th anniversary of the signing of the independence act, in Caracas, Venezuela, 5 July 2021. [Handout photo/EPA/EFE]

For Venezuelan President Nicolás Maduro, the voting in November’s regional elections is a second-tier priority as the government looks to make concessions to receive international sanctions relief.

Maduro’s own re-election in 2018 has not ever been recognized by either the opposition party at home or by around 60 other countries — including the European Union and United States.

Washington in particular has ramped up sanctions against the country and its ruling regime since then, putting huge pressure on a country that has been in recession for eight years and seen GDP shrink by 80% since 2014.

Maduro has promised to respect the results should his opponents triumph in the mayoral and gubernatorial contests, and to put an end to the “protectors” system whereby he has appointed loyalist figures in regions governed by the opposition in a bid to reduce his competitors’ power.

He is hoping such assurances will lead to a softening of the economic sanctions hanging over the country.

Meanwhile, Brussels and Washington are “committed to supporting a political negotiation to bring Venezuela’s nightmare to an end,” Michael Shifter, president of the Inter-American Dialogue, told AFP.

“The ‘maximum pressure’ strategy against Maduro not only failed but was counterproductive and actually helped strengthen Venezuela’s authoritarian regime,” said Shifter.

“This does not mean that the US is now about to lift tough sanctions, but rather that it will focus on employing them as a negotiating tool to create conditions for free and fair elections.”

Asphyxiated by the sanctions, including an oil embargo, Maduro has asked for an “immediate lifting” in order to begin negotiations.

Some sectors of the international community are beginning to look favorably on normalizing relations with Maduro, according to Luis Vicente Leon, president of pollsters Datanalisis.

On 25 June the European Union, United States and Canada issued a statement saying they were willing to “review” sanctions if negotiations to hold “credible” elections advance.

“It’s the embryo of a negotiation process,” said Vicente Leon.

Several diplomatic sources have told AFP such negotiations will begin soon in Mexico.

Maduro has even invited the EU to observe the 21 November elections. An EU election commission is due to arrive in Caracas on Tuesday.

“It’s an exploratory mission to see if we can observe elections in a credible manner,” an EU diplomatic source said.

“If that’s not the case, we won’t come. We don’t want to validate an election that doesn’t deserve it.”

For the opposition, the question is whether or not to boycott in November as it did for the 2018 presidential and 2020 legislative elections.

There is a lot on the line, also, for opposition leader Juan Guido, who is recognized by the EU, US and around 60 countries as Venezuela’s acting president, but has seen his popularity in Venezuela drop to just 15%, according to Datanalisis. 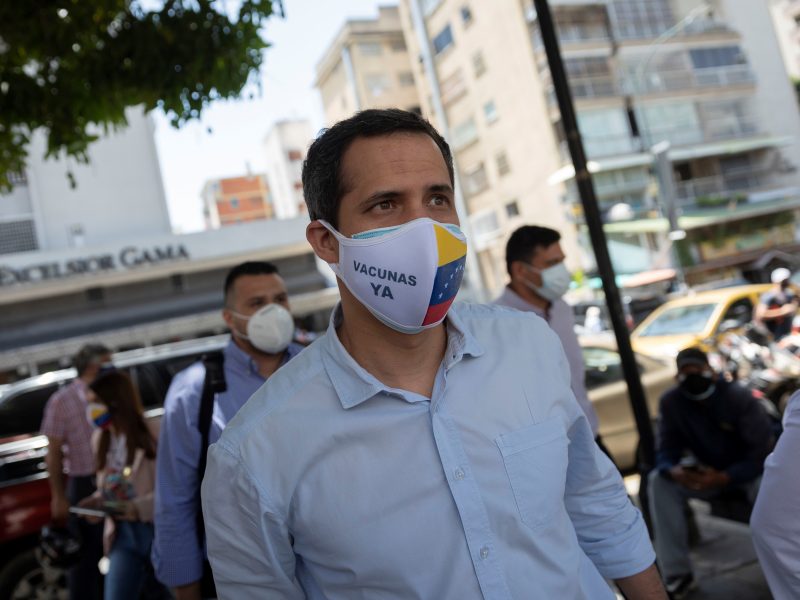 Venezuelan president Nicolas Maduro has indicated he is ready to restart halted talks with opposition leader Juan Guaidó, according to state media.

“It’s important to have a political agreement in relation to the profound crisis Venezuela is going through. It needs to be done intelligently,” Guaidó said last week.

He knows his political shelf life will be short if he doesn’t regain some of the momentum he had in 2019.

But Guaidó warned that the opposition should remain skeptical about Maduro’s overtures given “he’s suddenly said he will respect the constitution.”

Maduro continues to blow hot and cold, on Friday (2 July) claiming the CIA and US military were planning to assassinate him.

He rhetorically asked if Biden had authorized the assassination attempt.

In a letter on Monday, Biden affirmed his support for Guaidó and said the opposition leader was guiding his country “through a peaceful democratic transition of power.”

But Maduro has shown some signs of opening the doors to more democratic processes.

And a new CNE leadership has been appointed, including members linked to the opposition, although the ruling party maintains a majority in the body.

Maduro is “making gestures of openness that diminish his lack of credibility,” Ramon Guillermo Aveledo, who led the MUD from 2009-14, told AFP.

But the ruling regime “will (only) make concessions in the area it thinks will cause the least damage” to its grip on power, said Benigno Alarcon, head of political studies at Andres Bello Catholic University.

On the flip side, NGO activists critical of Venezuela military actions on the border with Colombia were on Saturday accused of “treason, terrorism and incitement to hatred.”