War of words heats up over the Falklands 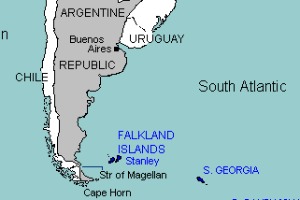 Argentina's president yesterday (7 February) accused Britain of "militarising the South Atlantic" and vowed to complain to the United Nations as tension rises ahead of the 30th anniversary of the Falklands war.

Britain and Argentina went to war over the disputed British-ruled Falkland Islands in 1982, and London rejects Argentine demands for sovereignty negotiations unless the roughly 3,000 islanders want talks to be held (see background).

"They're militarising the South Atlantic once again," President Cristina Fernández said in a speech at the presidential palace, criticising the deployment of British destroyer HMS Dauntless in the area in the coming months.

"If there's one thing we're going to preserve, besides our natural resources, is a region where peace prevails," she said, adding that the Foreign Ministry would present a formal complaint to the UN Security Council and General Assembly.

She also criticised Prince William's posting as a military search-and-rescue pilot in the islands, called Las Malvinas in Spanish: "We would have liked to see him dressed as a civilian, not with a military uniform," she said.

A war of words between the two governments has escalated in recent months.

Fernández, a fiery former senator who started her political career in the Patagonian region closest to the islands, has described Britain as a "crass colonial power in decline." British Prime Minister David Cameron hit back by accusing Argentina of colonialism.

Oil exploration by British companies off the islands has raised the stakes over the sovereignty dispute.

Three decades on, memories of the war remain painful in Argentina, where most people see the decision by Argentina to land in the islands on 2 April 1982 as a mistake by the discredited military dictatorship ruling at the time.

Fernandez also signed a decree on Tuesday to declassify a military report that was commissioned in the aftermath of the 10-week conflict in which about 650 Argentine and 255 British troops were killed.

The Falkland War was a limited conflict between the UK and Argentina, which began after Argentine forces invaded and occupied the Falkland islands, a disputed territory in the South Atlantic, east of Patagonia.

In total 907 were killed during the 74 days of the conflict, the highest point of which was the sinking of Argentinian warship General Belgrano by a British nuclear submarine.

Argentina has asserted that the Falkland Islands are Argentinian territory since the 19th century. UK sees it as British dependent territory.

Officially neither side declared war. The conflict had a strong impact in both countries and boosted Margaret Thatcher's government to victory in the 1983.

Relations between UK and Argentina were restored in 1989 under the umbrella formula which states that the islands' sovereignty dispute would remain aside.