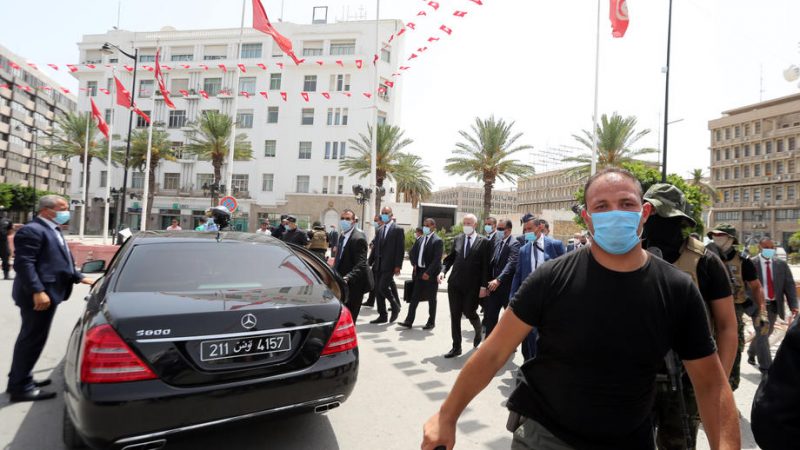 Tunisia’s democrats need more support from the EU and European nations as the north African country faces up to months of government by presidential decree, said Ahmed Gaaloul, an Ennahdha party official and a former youth and sports minister.

Ennahda, the moderate Islamist party and the largest caucus in Tunisia’s parliament, was blindsided by President Kais Saied’s announcement in July that he was sacking prime minister Hichem Mechichi, suspending parliament and governing by decree.

Last week, President Saied announced a second month of suspension, a move described by Ennahdha and many other political parties as unconstitutional and a coup.

“Tunisia is a model of democracy in the region,” Gaaloul told EURACTIV in an interview, adding that defending it “is in the interest of the EU and the whole region. Europe and the EU has a duty to defend human rights and democracy”.

“We need a strong and firmer attitude from those who defend democracy to support our cause. Then we will feel that we are not alone. We don’t want the plane of democracy to leave our country,” Gaaloul added.

Former European Commission President Romano Prodi has warned that “the consequences of turning towards autocracy will exceed Tunisia’s borders. We, the Europeans, are losing political influence on the southern bank of the Mediterranean.”

President Saied has rejected the claim that he has instigated a coup, pointing to the reference in Article 80 of the post-revolution constitution to an ‘imminent danger’ under which he is able to rule by decree.

The president has rejected any calls for a roadmap out of the crisis, or for dialogue with domestic politicians or the international community. “It seems that the country is going towards a total closure”, said Gaaloul.

For the moment, however, Saied appears to be riding a wave of public support and has seen a sharp spike to his personal popularity ratings.

“People want to give President Saied a chance,” said Gaaloul. “But if you want to govern, please do it in a democratic way.”

Ten years ago, after anti-government protests toppled the regime of Zine El Abidine Ben Ali, prompting the country’s transition to democracy, and the start of the Arab Spring, a succession of weak governments and a sclerotic economy have made millions of Tunisians keen to embrace strong leadership

However, without an agreement with parliament, Saïed cannot pass and implement the budget for the 2021-22 financial year. So far, he insists that he has no interest in a new support package from the International Monetary Fund which many analysts say is needed to prop up the Tunisian economy.

“We believe that what is happening is a national crisis,” Gaaloul said.

That leaves Ennahdha and other political parties shut out by President Saied, facing something of a waiting game, though they are prepared to offer Saied some cooperation and are willing to vote for a new prime minister should Saïed propose a nominee.

“It is important to accept that public opinion is looking for someone to govern. But he now faces very high levels of expectation with very low capabilities to deliver. We expect his popularity to fall substantially over the next few months,” Gaaloul added.

In the meantime, Ennahdha said it would work with other parties and civil society to hold the president to account, but Gaaloul conceded that they are “progressing slowly”. There is no sign of fresh elections being called

Gaaloul fears that the longer presidential rule by decree continues, the prospects of oppressive measures limiting civic rights. He told EURACTIV that thousands of people are not allowed to travel, or are under house arrest, by presidential order.

Last week, the offices of the National Anti-Corruption Body (INLUCC) were raided, and the national organisation closed. Its secretary-general, Anouar Ben Hassan, was dismissed.

The EU institutions have been largely silent on the political situation in Tunisia.

The bloc’s chief diplomat, High Representative Josep Borrell, stated that the “commitment to democracy, and respect for the rule of law, for the Constitution and for the legislative framework must be maintained, while remaining attuned to the wishes and aspirations of the Tunisian people.”

Borrell also called for “parliamentary activity to resume, for fundamental rights to be respected and for all forms of violence to be avoided.”