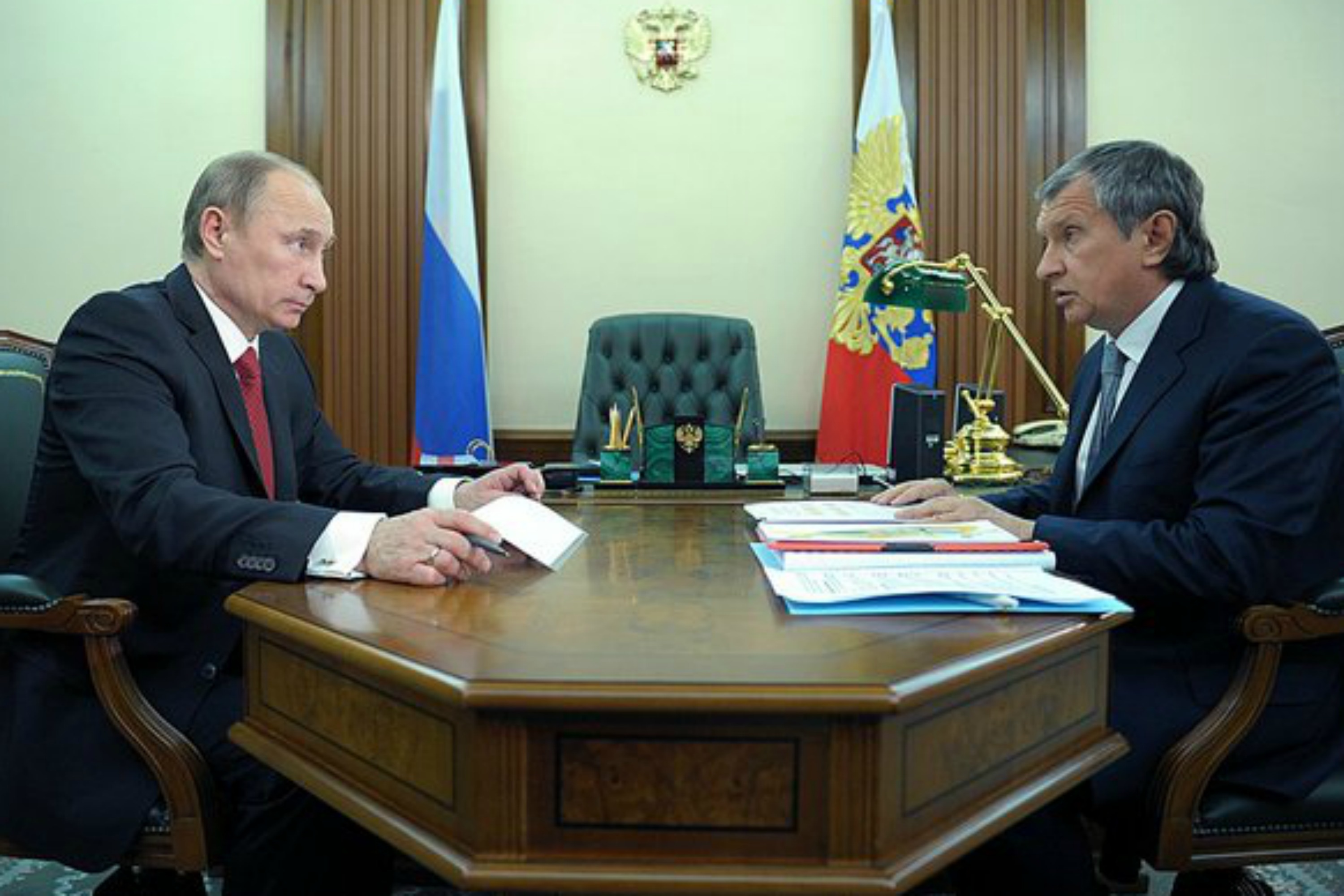 The US move to ban visas and freeze assets of the likes of Putin’s friend Igor Sechin, head of oil giant Rosneft, also drew fire from President Barack Obama’s domestic critics, who called it a “slap on the wrist.” Rosnef itself is not under sanctions.

The new round of US sanctions, following those imposed last month when Russia annexed Crimea, barely registered in eastern Ukraine, where pro-Moscow rebels were holding a group of German and other military observers of the Organisation for Security and Cooperation in Europe (OSCE) for a fourth day.

Despite a Ukrainian military operation to contain them, the militants extended their grip by seizing key public buildings in another town in the Donetsk region. In the regional capital, Donetsk, club-wielding pro-Russian activists broke up a rally by supporters of the Western-backed government in Kyiv.

The high-profile mayor of Kharkiv, Ukraine’s second city, was badly wounded by a gunman, raising fears of further unrest in a Russian-speaking region that has seen less trouble of late than the neighbouring provinces of Donetsk and Luhansk.

US sanctions were aimed, Washington officials said, at “cronies” of Putin. Seven men, including Sechin, were targeted by visa bans and freezing of any US assets, and 17 companies were also named [read more].

“The goal is not to go after Mr. Putin personally,” Obama said. “The goal is to change his calculus with respect to how the current actions that he’s engaging in Ukraine could have an adverse impact on the Russian economy over the long haul.”

Washington will also deny export licenses for any high-technology items that could contribute to Russian military capabilities and revoke any existing export licenses that meet these conditions, the White House said [read more].

In addition to Sechin, the Russians sanctioned by the United States included another Putin ally, Sergei Chemezov, head of Rostec, a Russian state-owned high-tech products company.

Not included was Gazprom chief Alexei Miller, a close ally of Putin who had been seen as a possible target.

Obama is under pressure from opposition Republicans at home to move faster on sanctions. But in taking what he described as “calibrated steps”, he has emphasised a need to act in concert with European countries, which have more at stake economically and a more cumbersome process for taking decisions.

There was little prospect of a change in the calculus for Putin, who critics say is stirring up fear among ethnic Russians in order to redraw post-Soviet borders and rebuild Moscow’s empire.

“Washington is in effect reviving … an old method of restricting normal cooperation, from Cold War times, essentially chasing itself into a dark, dusty closet of a bygone era,” said Deputy Foreign Minister Sergei Ryabkov, describing the sanctions as illegitimate, uncivilised and in breach of international law.

In an hour-long phone call with US Pentagon chief Chuck Hagel, Russian Defence Minister Sergei Shoigu voiced concern about an “unprecedented” increase in US and NATO activity near Russia’s borders and urged Hagel to help “turn down the rhetoric” over Ukraine, Moscow’s Defense Ministry said.

Both sides continue to offer diametrically mirror-image versions of events in Ukraine. The West sees the pro-Western leaders who took power after Kremlin-backed President Viktor Yanukovich fled to Russia in February as legitimate and believes Putin is trying to undermine their efforts to hold an election.

For Moscow, they are “fascists” and “putschists”, anti-Russian Ukrainian nationalists against whom the Russian speakers of Crimea and the east have risen up in self-defence – a view it broadcasts into Ukraine on state-run Russian media.

Opinion polls show substantial but still only minority support in the depressed, industrial east of Ukraine for it to follow Crimea into union with Russia.

Several people were injured on Monday after dozens of men in military fatigues, carrying baseball bats and throwing firecrackers, tried to break up a demonstration in Donetsk.

A crowd of about 2,000 waved Ukrainian flags and chanted: “Donetsk is Ukraine” and “Putin, no”, but they dispersed after the assault, in which Reuters journalists saw at least 10 people treated for head injuries.

Earlier in the same region, armed men in camouflage who refused to identify themselves seized the police station and town hall in Kostyantynivka. Reuters journalists saw about 20 well-organised gunmen controlling the administration building. They erected a barricade of tyres, sandbags and concrete blocks.

Soviet songs played over loudspeakers, and women gathered signatures in support of an uprising against rule from Kyiv.

Kharkiv Mayor Gennady Kernes, a colourful and well-known figure nationwide, was shot in the back while out exercising, and doctors are battling to save his life. Kernes, 54, is a member of the party through which Yanukovich and fellow easterners had dominated a Ukrainian system widely seen as deeply corrupt.

Among the most prominent Jewish politicians in the country who earned his wealth from business dealings in the crime-ridden 1990s, Kernes had called for Kharkiv to quit Ukraine after Yanukovich fell, but had lately clamped down on separatists. The government said police were looking into whether the assassination attempt was linked to the arrest of pro-Russian separatists on Sunday.

Although Russia signed a deal with Ukraine and Kyiv’s US and EU allies at Geneva 10 days ago under which militants should surrender to OSCE monitors, it flatly denies Ukrainian and Western assertions it is controlling the militants’ activities and that it has special forces orchestrating events on the ground.

After an appeal from Germany, long Moscow’s firmest advocate in the West, for Russia to intervene to secure the release of the seven European monitors, four of whom are German, Moscow’s ambassador to the OSCE said it would be good if they were freed.

But he also condemned the OSCE, of which Russia is a member, for being “extremely irresponsible” in sending them to eastern Ukraine. Moscow has condemned the Kyiv authorities for failing to provide security in the industrial and heavily populated east, close to the Russian border.

In the face of Western and Ukrainian calls for it to pull back troops massed on Ukraine’s frontier, the Russian Foreign Ministry said on Monday it had “deep concern” about forces Kyiv has sent to the region, suggesting that Ukrainian troops might be preparing for “the destruction of entire cities”.

In the separatist military stronghold at Slaviansk, the self-declared mayor, Vyacheslav Ponomaryov, said he had given OSCE mediators a list of detainees his movement wanted freed by Kyiv in return for the OSCE observers he is holding.

The Russian Foreign Ministry said the jailed leader of an earlier separatist protest in Donetsk was on hunger strike to protest against his torture. It also cited reports that Ukraine was building detention centres “very reminiscent of Nazi concentration camps” for “dissenting citizens” in the east.

The Moscow stock market shrugged off the sanctions, rising almost 1% when they failed to penalise more companies.

Although its chief executive, Sechin, was hit by a visa ban, few expected Rosneft or its international partners to suffer much, though its shares lost 1.7% on the day.

Western countries say sanctions are already having an effect on Russia by scaring investors into pulling out capital. The central bank has raised interest rates to support the rouble, and Russian firms are finding it harder to raise funds.

Japan and Canada announced that they had imposed sanctions on Russia, as a result of a decision taken at G7 level on 27 April.

"Japan expresses serious concern that Russian moves to violate Ukraine's sovereignty and territorial integrity, including the annexation of Crimea, are continuing," Japanese Foreign Minister Fumio Kishida said in a statement.

The Foreign Ministry did not disclose the names, titles or nationalities of the 23 people hit with the new visa bans. A ministry official said Japan's list was based on those compiled by the United States and the European Union.

The two banks are ExpoBank, listed last year as the 103rd biggest Russian bank by assets, and RosEnergoBank, which in 2012 had income of $4.24 million and assets of $1.01 billion, according to Moody's Investors Service last year. .

"The illegal occupation of Ukraine continues and Russia's military aggression persists. That is why we are imposing sanctions against an additional nine individuals and two entities today," Prime Minister Stephen Harper said in a statement announcing the measures.

"Until Russia clearly demonstrates its respect for Ukraine's sovereignty and territorial integrity, Canada will continue to work with its allies and like-minded countries to apply pressure that will further isolate Russia economically and politically."

The others are Vladimir Volfovich Zhirinovsky, leader of the Liberal Democratic Party of Russia; Alexander Mikhailovich Babakov, whom Harper's office listed as Chairman of the State Duma Commission on Legislative Provisions for Development of the Military-Industrial Complex of the Russian Federation; and businessmen Arkady and Boris Rotenberg.