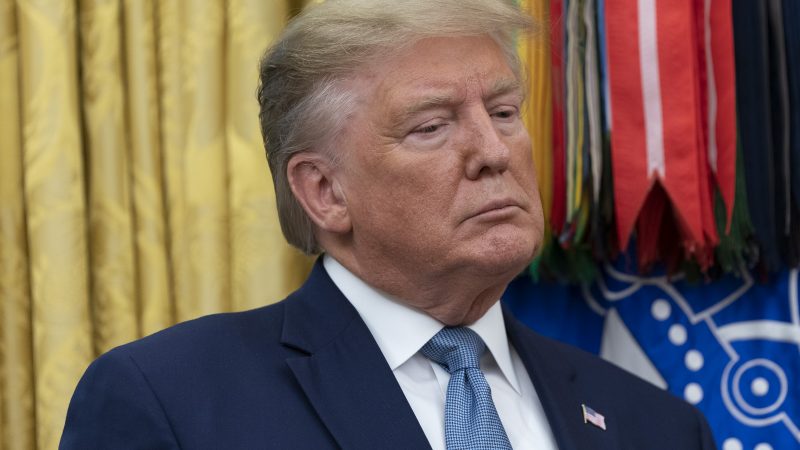 US President Donald J. Trump listens during the ceremony presenting the Presidential Medal of Freedom to Edwin Meese at the White House in Washington, DC, USA, 8 October 2019. [Pool/EPA/EFE]

The White House slammed the door in a letter Tuesday on any cooperation by President Donald Trump’s administration with the Democrats’ impeachment probe, calling it “constitutionally invalid.”

The eight page letter to Democratic leaders, signed by White House counsel Pat Cipollone, rejected the entire process underway in the House of Representatives, which is examining whether Trump abused his office by seeking a corruption probe in Ukraine of 2020 election rival Joe Biden.

“President Trump cannot permit his Administration to participate in this partisan inquiry under these circumstances,” the letter said.

“Your inquiry lacks any legitimate constitutional foundation, any pretense of fairness, or even the most elementary due process protections,” the letter said.

The White House said it objected especially to the fact that the lower house had not held a formal vote to launch the impeachment inquiry.

That “has never happened,” a senior administration official, speaking on condition of anonymity, told reporters. He accused Democrats of “purporting simply to proceed on the basis of a news conference.”

Democrats say that no formal House vote is needed because the impeachment process is in its earliest stages, equivalent to gathering evidence for an indictment. Only then would the Democrats call for a vote on whether to impeach, passing the matter on to the Republican-controlled Senate for a trial.

The decision means no members of the Trump administration will be authorized to testify in Congress and will ignore subpoenas, the official said.

He insisted that the White House was “definitely avoiding saying there’s no way we’d ever cooperate.” However, he gave no explanation of how a change might come.

The letter had been awaited for several days as part of Trump’s strategy of stonewalling investigators and focusing on undermining the credibility of Democratic leaders with his voter base.

Earlier Tuesday, the White House prevented the US ambassador to the European Union, Gordon Sondland, from showing up to testify.

“He would be testifying before a totally compromised kangaroo court,” Trump said on Twitter.

I would love to send Ambassador Sondland, a really good man and great American, to testify, but unfortunately he would be testifying before a totally compromised kangaroo court, where Republican’s rights have been taken away, and true facts are not allowed out for the public….

“We hope that, in light of the many deficiencies we have identified in your proceedings, you will abandon the current invalid efforts to pursue an impeachment inquiry and join the President in focusing on the many important goals that matter to the American people,” it said.