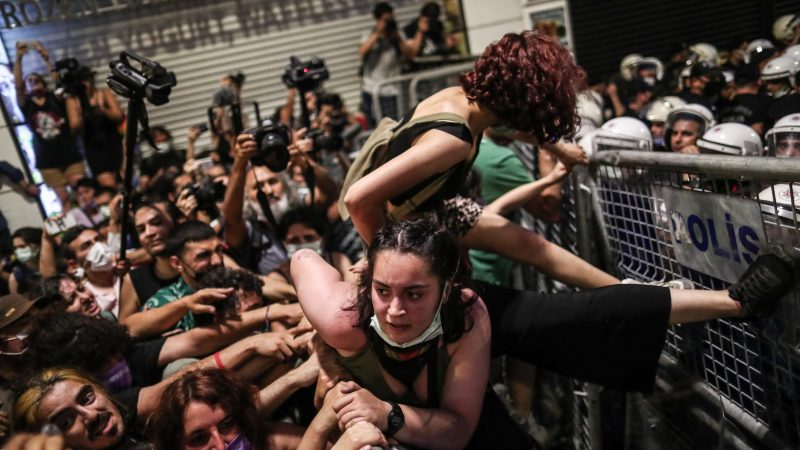 Turkish police block women as they demonstrate against Turkey's decision to withdraw from the Istanbul Convention, in Istanbul, Turkey,01 July 2021. [EPA-EFE/SEDAT SUNA]

Turkish President Recep Tayyip Erdoğan sparked international outrage in March by pulling out of the world’s first binding treaty to prevent and combat violence against women, known as the Istanbul Convention. 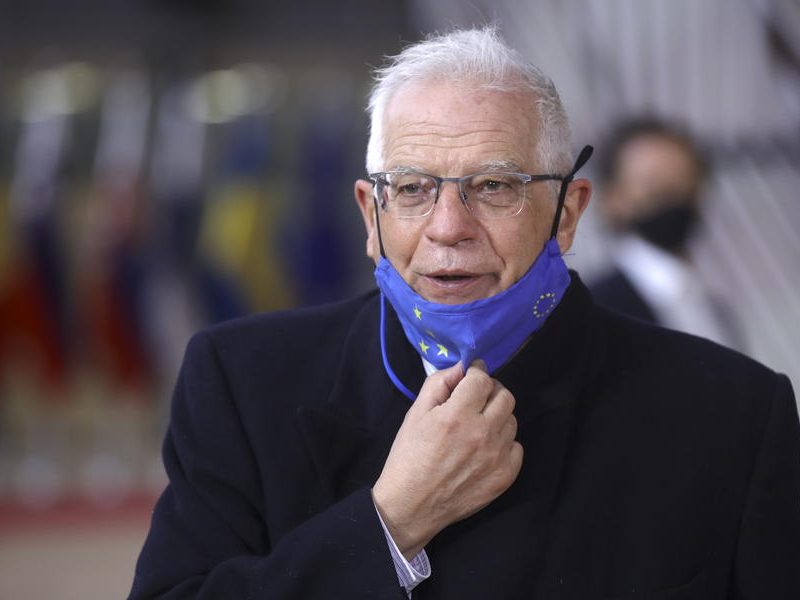 Hundreds of people rallied in support of the convention on Thursday evening in Istanbul but the protest became tense after police did not allow them to walk to the popular Taksim Square, an AFP correspondent said.

The protesters pushed against barricades despite repeated warnings by police.

"We won't be silenced. We are not afraid. We do not obey."

Thousands took to the streets of Istanbul to protest Turkey's official withdrawal from a treaty designed to prevent violence against women. pic.twitter.com/aNYdhpssCO

There were demonstrations across Turkey including the capital Ankara, which ended peacefully.

The 2011 pact, signed by 45 countries and the European Union, requires governments to adopt legislation linked to the prosecution of crimes including marital rape and female genital mutilation.

Erdoğan’s move came as he clings on to support from conservative and nationalist groups to maintain his 18-year rule.

Rights organisations say Erdoğan’s decision will put women at greater risk of violence when femicide is already prevalent in Turkey.

“We’re very frustrated. Every day a woman who we know or don’t know is murdered. There’s no guarantee that we will not be subject to the same treatment tomorrow,” Nevin Tatar, 35, said during the demonstration in Istanbul.

The protesters including some with rainbow flags, chanted earlier on Thursday: “We’re not going to be silent, we’re not scared, we won’t obey!”

The president on Thursday insisted Turkey’s commitment to end violence against women would not suffer because of his decision.

“As the fight against violence against women did not begin with this treaty, so will our commitment not end because we are withdrawing,” he said.

He was speaking at an event at the presidential palace in Ankara for a national action plan to combat violence against women.

But in comments likely to anger Turkish women Erdoğan said “the fight was about protecting the honour of… our mothers and daughters”.

Erdoğan in 2016 recommended women have three children and suggested a woman was “incomplete” if she did not have any.

The LGBTQ movement is “incompatible” with Turkey’s social and family values, he said.

Homosexuality has been legal in Turkey since the Ottoman Empire.

But women’s rights groups accuse Ankara of withdrawing from the treaty to appease conservatives at a time when Erdoğan’s ruling Islamic-rooted party is recording lower levels of support.

The withdrawal was condemned by the European Union and the United States.

Turkey’s highest administrative court on Tuesday rejected an attempt to annul the withdrawal, saying that Erdoğan had the “authority” to make the decision.

Last year, 300 women were murdered in the country, according to the rights group We Will Stop Femicide Platform, while 189 have been killed so far this year.

“The withdrawal sends a reckless and dangerous message to perpetrators who abuse, maim and kill: that they can carry on doing so with impunity,” said Amnesty International’s secretary general, Agnes Callamard.

Before the withdrawal, women’s organisations urged Ankara to apply the treaty to protect women.

“We fought for the convention to be implemented. They believe they can exit from the convention with the word from one man. But women won’t give up,” Ipek Deniz, 35, told AFP in Istanbul.

The Istanbul governorate banned a Pride march last weekend, which saw police use force while detaining dozens of protesters and pin an AFP photographer to the ground, prompting a formal complaint.

The parade was held annually in Istanbul until 2015, an event which had been attended by thousands of people.

Critics say the bans on the Pride march and the treaty withdrawal demonstrate a creeping Islamisation under Erdoğan, who first came to power as prime minister in 2003.