The comments come following a firming-up of the European Council’s position, with President Charles Michel saying yesterday (26 May) that the bloc attaches “great importance to the preservation of Hong Kong’s high degree of autonomy in line with the Basic Law and international commitments.”

However, for Wong, words from the EU should be attached with more tangible outcomes. According to him, there is a real risk that the 1985 Sino–British Joint Declaration could be breached with the introduction of China’s new security law in Hong Kong.

Chinese Premier Li Keqiang’s plans would see “treason, secession, sedition and subversion” banned in Hong Kong, prompting fears that rights to protest and freedom of assembly in the territory could be lost, in addition to Hong Kong’s special status as an autonomous territory.

“Autonomy and liberty are promised in the Joint Declaration, a legally binding international treaty at the United Nations,” Wong, who is secretary-general of the Demosistō group, told EURACTIV.

In international law, Hong Kong is considered an autonomous region of the Chinese state after being returned to the country after 156 years of British rule, under the principle of “one country, two systems,” meaning that Hong Kong enjoys certain civil liberties not afforded to Chinese counterparts.

“Since China is violating and rewriting the rule, I urge the European Union, to pass legislature similar to the Magnitsky Act, impose sanctions on China and include human rights terms in relation to Hong Kong into trade treaties they are about to conclude with China,” Wong added.

“I call upon the European leaders to jointly express opposition against the new law. Since the security law is hugely controversial, there must be full legislative scrutiny and public consultation.”

EU foreign affairs ministers have previously signalled their intention to establish an EU human rights framework in a similar model to the US Magnitsky Act, which applies sanctions against individuals accused of human rights abuses globally, including asset freezes and travel bans. 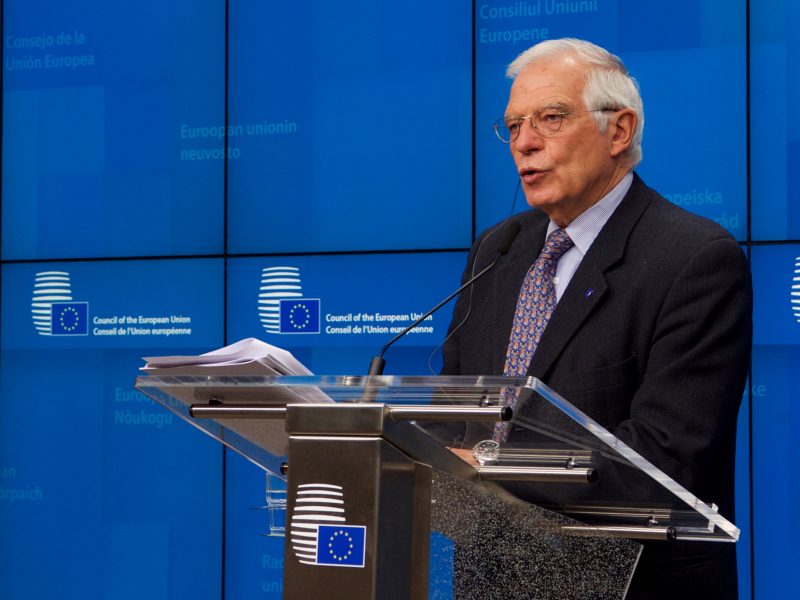 EU foreign ministers on Monday (9 December) cleared the way to start work on a European ‘Magnitsky Act’, modelled along the lines of a similar-named US sanctions framework targeting individuals involved in human rights abuses worldwide who could face EU asset freezes and  travel bans.

The Obama administration passed the law following the death of Russian lawyer Sergei Magnitsky in a Moscow prison in 2009, after he had been subjected to physical assaults while incarcerated.

The US Act was adopted as a means of enacting punitive measures against the individuals who had been responsible for Magnitsky’s death. Related legislature has also been passed in the UK, Estonia, Lithuania and Latvia.

“We have agreed to launch the preparatory work for a global sanctions regime to address serious human rights violations, which will be the European Union equivalent of the so-called Magnitsky Act of the United States,” Borrell said after a meeting of EU foreign ministers in December 2019.

However, since that date, little progress has been made on the plans, prompting a response from members of the European Parliament who wrote to Borrell in March, calling for the EU to “move quickly” on the issue.

“While we are focused today on the COVID-19 pandemic, we cannot forget the ongoing human rights abuses taking place around the world at the hands of dictators and kleptocrats,” the letter says. “If we fail to address human rights abuses with strong measures, our calls of concern will ring hollow to victims’ ears.”

The #COVID19 pandemic must not prevent us from punishing dictators and kleptocrats who violate human rights. It’s high time for a European Magnitsky Act. Read our letter to the European High Commissioner @JosepBorrellF here: pic.twitter.com/3ywGLAE239

EU Foreign Ministers will discuss the bloc’s approach in more detail during a regular meeting on Friday (29 May).

Borrell has already signalled this week that the EU could adopt a more stringent line on China’s involvement in Hong Kong, saying that the bloc needs to adopt a “more robust strategy” on Beijing.

For his part, Wong has a clear message for EU counterparts ahead of Friday’s gathering: China’s authoritarian model of governance can most effectively be challenged by European leaders economically.

“The EU is China’s largest destination for exports, the top source of high technology and the most critical checkpoint for China’s Belt and Road Initiative,” he told EURACTIV.

“When China aggressively expands its authoritarian model overseas, the European Union has much economic leverage in its toolkit to play a more active role, in urging China to improve its human rights standards, respect Hong Kong’s autonomy and halt the new security legislation that will kill the city’s future democratic movement.”

In Beijing, the National People’s Congress are set to discuss and approve the Hong Kong national security legislation on Thursday (28 May). Following the vote, China’s top legislature will rubber stamp the plans with a view to enacting the new measures before the end of June.

One response to “Wong: EU should hurry up on Magnitsky Act to save Hong Kong”