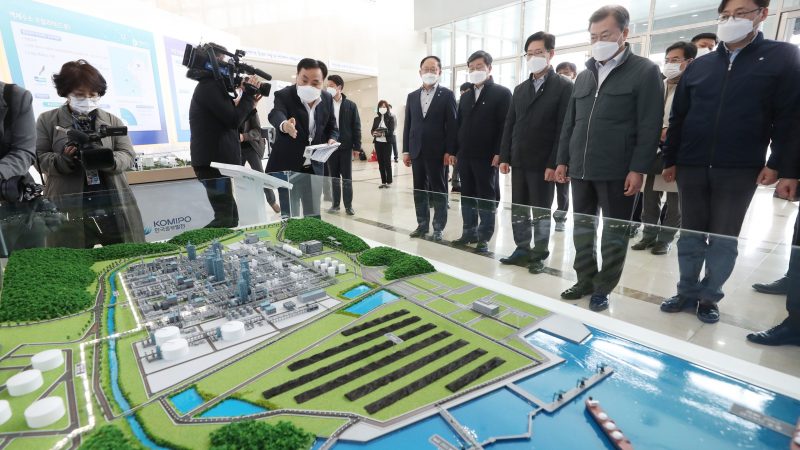 President Moon Jae-in (2-R) looks at a mockup for a hydrogen production plant to be built under the government's Green New Deal initiative during a visit to a thermal power plant in Boryeong, 140 kilometers south of Seoul, South Korea, 19 March 2021. [Yonhap South/EPA/EFE]

It’s seen as the missing link in the race for carbon-neutrality: “green” hydrogen produced without fossil fuel energy is a popular buzzword in competing press releases and investment plans across the globe.

Europe in particular is anxious to get a handle on the new and still costly fuel, having missed the boat on solar and battery technology, which is dominated by China.

Clean burning hydrogen – its combustion produces water vapour – could give a renewed lease on life to polluting heavy industry.

Hydrogen-powered fuel cells could also solve the key problem with battery electric vehicles – the long recharge times – as filling up a tank with hydrogen takes just a bit longer than putting in petrol.

But countries face more than just the engineering challenge of producing emissions-free hydrogen. They also have to develop the demand for the fuel and the infrastructure to transport it.

Still others plan to generate it as a byproduct of natural gas, which is “grey” hydrogen, or “blue” if the CO2 produced is somehow captured and stored.

“We are referring to this as the Hydrogen Wars,” said Gero Farruggio, co-founder of Sustainable Energy Research Analytics at Rystad Energy.

He said of the 76 gigawatts of production projects they are tracking, 40 were announced in 2020.

“Governments are racing to incentivise projects for domestic and export green hydrogen markets – working hard to attract the billions of dollars expected to be invested over the coming years.”

The United States has a hydrogen road map. Germany plans to invest €9 billion, while for France and Portugal the figure is €7 billion each. Britain plans to spend £12 billion (€13 billion), Japan $3 billion, and China $16 billion by 2020 to green up their industries, according to consultancy Accenture. 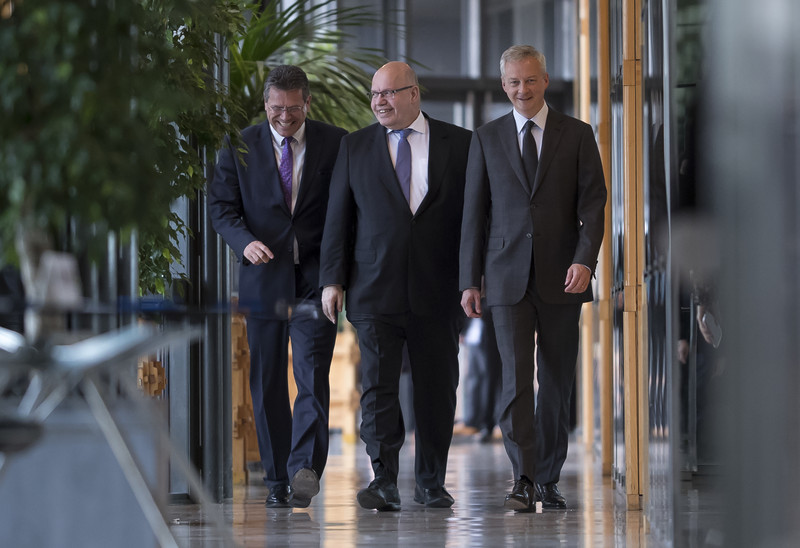 With their huge energy needs and reliance on imported fossil fuels, Asian industrial heavyweights China, Japan and South Korea are keen on the prospect of green hydrogen.

“Given China’s needs, it’s trying everything including hydrogen, especially when it comes to mobility,” said Nicolas Mazzucchi of France’s Foundation for Strategic Research.

China is working on a hydrogen production model that relies on electricity from its growing number of nuclear reactors, although its current supply is produced using coal, which releases lots of CO2 into the atmosphere.

Its hydrogen is being bought up by fuel cell and filling station builders from all over the world, from Canadian firm Ballard to French companies Symbio and Air Liquide.

Rystad Energy’s Farruggio said China’s desire to decarbonise its economy and its ability to lower costs means it could come to dominate the manufacturing of electrolysers – devices that use electricity to split water into hydrogen and oxygen.

But Europe isn’t throwing in the towel yet.

Charlotte de Lorgeril, of management consultancy Sia Partners, described Germany as being ahead in using hydrogen in transportation, France in production, while the Netherlands already has strong gas infrastructure thanks to its natural gas fields.

The European Union is aiming to push hydrogen’s share of its energy supply from 2% currently to 12-14% by 2050 and is encouraging cooperation.

Mazzucchi said he worries that the European Union will pay for its lack of a global energy strategy which risks turning hydrogen into nothing more than a momentary “pet project”.

Energy industry actors meanwhile are trying to gain a foothold by acquiring startups or developing consortiums.

“Their strategy is to compete with historical hydrogen actors who are trying to become energy providers,” said Mikaa Mered, a lecturer at the HEC business school in Paris.

As the euphoria takes hold, hydrogen could upend the world’s energy map with new alliances and interdependencies already taking shape.

Germany is approaching Morocco to use solar power to make hydrogen. The Green Spider and Green Flamingo projects are developing maritime highways for hydrogen and gas pipelines to link Spain and Portugal to northern Europe.

“It is the creation of those new logistics chains that will allow imports from the Chilean or Saharan deserts where there is a lot of solar power,” said Sia Partners’s Lorgeril.

Mikaa Mered said the “question of the decade” is whether the development of hydrogen will result in a decentralisation or a new set of dependencies like with oil exporting and consuming nations.