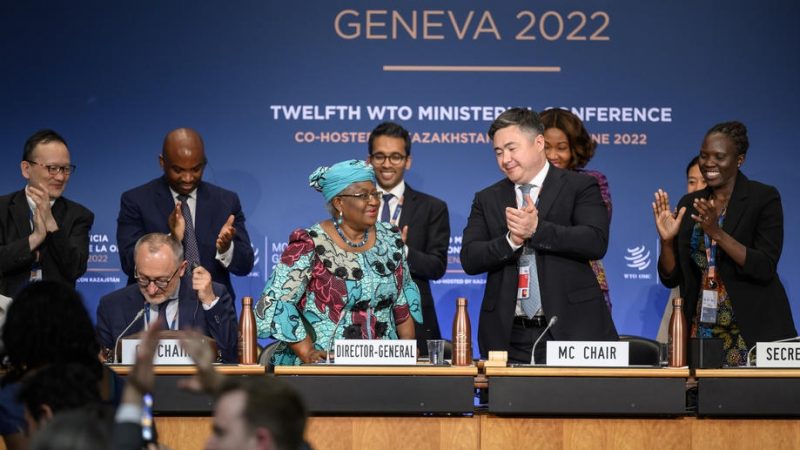 The World Trade Organization agreed on the first change to global trading rules in years on Friday (17 June) as well as a deal to boost the supply of COVID-19 vaccines in a series of pledges that were heavy on compromise.

The deals were forged in the early hours of the sixth day of a conference of more than 100 trade ministers that was seen as a test of the ability of nations to strike multilateral trade deals amid geopolitical tensions heightened by the Ukraine war.

Delegates, who had expected a four-day conference, cheered after they passed seven agreements and declarations just before dawn on Friday.

Director-General Ngozi Okonjo-Iweala told them: “The package of agreements you have reached will make a difference to the lives of people around the world. The outcomes demonstrate that the WTO is in fact capable of responding to emergencies of our time.”

Earlier she had appealed to WTO members to consider the “delicate balance” required after nearly round-the-clock talks that have at times been charged with anger and accusations.

The package, which the WTO chief called “unprecedented”, included the two highest profile deals under consideration – on fisheries and on a partial waiver of intellectual property (IP) rights for COVID-19 vaccines.

The accord to curb fishing subsidies is only the second multilateral agreement on global trading rules struck in the WTO’s 27-year history and is far more ambitious than the first, which was designed to cut red tape.

At one stage, a series of demands from India, which sees itself as the champion of poor farmers and fishermen as well as developing countries, appeared set to paralyse talks but accommodations were found, trade sources said. 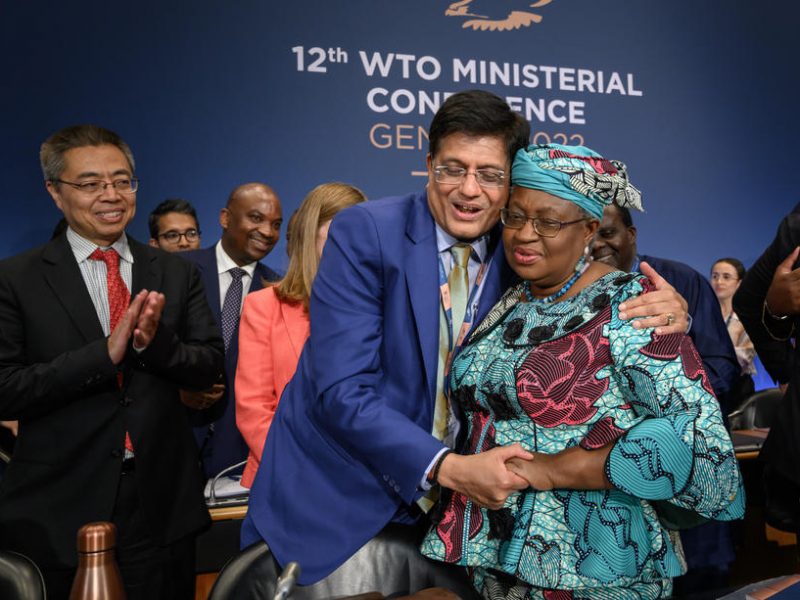 Major members of the World Trade Organization reached an initial deal on 16 June, winning over India which said it was confident more global accords could be achieved as negotiations on fishing, vaccines and food security entered their final hours.

The WTO’s rules dictate that all decisions are taken by consensus, with any single member able to exercise a veto.

“It was not an easy process. There were a lot of bumps, just like I predicted. It was like a roller coaster, but in the end we got there,” an exhausted but elated Okonjo-Iweala told a final news conference.

The deal to ban subsidies for illegal, unreported and unregulated fishing or fishing of an over-fished stock has the potential to reverse collapsing fish stocks. Though pared back significantly, it still drew approval.

“This is a turning point in addressing one of the key drivers of global over-fishing,” said Isabel Jarrett, manager of The Pew Charitable Trusts’ campaign to reduce harmful fisheries subsidies.

Okonjo-Iweala said it was the first step after 21 years of talks towards what she hoped would be a more comprehensive deal.

The deal on a partial IP waiver to allow developing countries to produce and export COVID-19 vaccines has divided the WTO for nearly two years, but finally passed. It has also drawn the fiercest criticism from campaign groups that say it barely expands on an existing exemption in WTO rules and is too narrow by not covering therapeutics and diagnostics.

“Put simply, it is a technocratic fudge aimed at saving reputations, not lives,” said Max Lawson, co-chair of the People’s Vaccine Alliance.

The pharmaceutical industry was also critical of the deal, saying that there is currently a surplus of shots which governments and other authorities haven’t figured out how to distribute and administer.

“Rather than focus on real issues affecting public health, like solving supply chain bottlenecks or reducing border tariffs on medicines, they approved an intellectual property waiver on COVID-19 vaccines that won’t help protect people against the virus,” Stephen Ubl, President of the Pharmaceutical Research and Manufacturers of America, said in an emailed statement.

One agreement also reached was to maintain a moratorium on e-commerce tariffs, which business says is vital to allow the free flow of data worldwide.

Overall, many observers said the deals should boost the credibility of the WTO, which was weakened by former US President Donald Trump’s crippling of its ability to intervene in trade disputes, and set it on a course for reform.

“The profound divergences here amply confirm that a deep reform of the organisation is urgently needed, across all its core functions,” he said, adding he would work to get it agreed at the next ministerial conference due in 2023.

We showed that we can respond to urgent issues of global significance, such as the emerging food security crisis & the #Covid19 pandemic.