Zaev: "We expect trade between the two countries to double." [Sarantis Michalopoulos]

“We expect trade between the two countries to double,” MIA new agency quoted Zaev as saying.

The referendum due on 30 September has divided the country as conservative opposition plans to boycott it.

The government wants to achieve a high turnout, amid concerns that if it is less than 50% it may undermine a positive outcome. 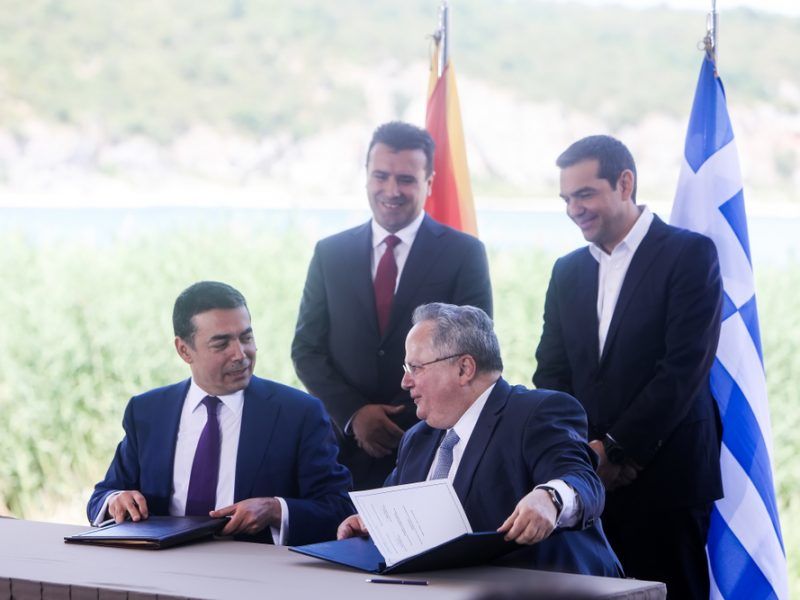 Speaking to business representatives on 24 September in Bitola, Zaev referred to the articles 13 and 14, which provide specific ways to strengthen economic cooperation with Athens once the name deal is implemented.

“I recommend that Bitola citizens focus on conquering the Greek market, which is an excellent market. We, as a country, I believe we will reap the benefits from the deal with Greece, as it’s a fair solution with political impact,” Zaev explained.

Political elites have the problem, not the people

Greece is the third trading partner and the second largest investor in Fyrom.

In an interview with EURACTIV.com in June on the sidelines of the “Western Balkans and the EU – Where do we go from here?” event, President of the Economic Chamber of FYROM Branko Azeski also emphasised the benefits on the economy of a positive referendum outcome.

“Being a partner of Greece means to be a partner of a regional power,” he said, adding that the majority of the country’s business community shares this view.

“Our member companies create 90% of the country’s GDP and 95% of the economy’s profits and employ 92% of the industry’s employees […] As all the other countries in the region have their own partners, I think my country must have Greece,” he noted.

Azeski explained that Greece was the partner that will protect his country’s interests.

“If Greece and Serbia have a 4% GDP growth, then our country without doing anything will have at least a 2% increase. It is in our interest that Serbia and Greece develop,” he said.

He noted that Fyrom’s public opinion wanted to cooperate and “not be stubborn” as it is an existential need for the country to implement the name deal.

“The peoples in our countries have excellent mutual relations […] for them to cross the border is not a problem and this year thousands of tourists will visit Greece. Many of our citizens have property in Greece and it is obvious that only political elites have problems not ordinary people,” he added.

“I understand the sensitivity of the issue, but we have no alternative but to grow economically. Greece is a very important regional factor in every respect and it will be a great honour for us to cooperate with the Greeks.

“We want to be partners, to learn from Greece and we are not ashamed to ask for help,” he concluded.