After the protests, what debt will Kazakhstan’s leaders owe Russia? 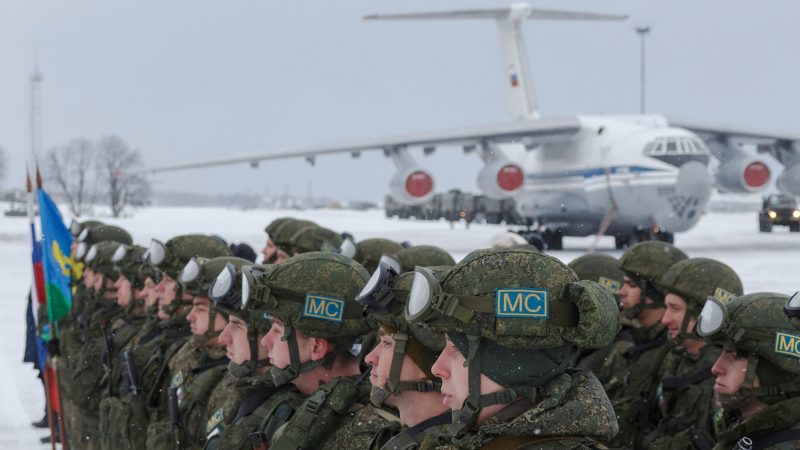 A handout photo made available by the Russian Defence Ministry press service shows Russian peacekeepers attending a welcome ceremony upon returning from a mission in Kazakhstan on the military base in Ivanovo, Russia, 15 January 2022. [Handout photo/EPA/EFE]

What seems obvious after the recent protests is that Kazakhstan might become even more reliant on Russia, demonstrating a diminished ability to balance the influence of Washington and Moscow, writes Aigerim Toleukhanova.

Aigerim Toleukhanova is an independent journalist from Kazakhstan, a researcher in human rights and press freedom in Central Asia, and a former digital editor with Radio Free Europe/Radio Liberty’s Kazakh service.

The protests that erupted in Kazakhstan last week, some of the bloodiest in the country’s history, came less than a month after Kazakhs celebrated three decades of independence from the Soviet Union.

Now, as the dust settles from days of deadly unrest that killed more than 200 people, Kazakhstan may once again find itself pulled into the Kremlin’s orbit. What remains unknown is the price tag for the Russian-led intervention that helped quell the protests.

Demonstrations over a doubling in liquified petroleum gas prices began peacefully on 2 January, in the western town of Zhanaozen. Western Kazakhstan is rich in oil and gas, but the local population sees little benefit.

Most of the cities in the region have poor infrastructure and a lower quality of life compared to the biggest city, Almaty, and the capital, Nur-Sultan.

As protests in solidarity with Zhanaozen gained momentum across the country, the demands of the people became more varied, and more political.

Many chanted “Alga, Kazakhstan!” (“Go, Kazakhstan!”) and “Shal ket!” (“Old man, go away!”), the latter a reference to Nursultan Nazarbayev, the country’s ex-president since 2019. Until recently, Nazarbayev held significant power in the country and was viewed as an influential powerbroker.

Police initially used tear gas and stun grenades to disperse the crowds. But Almaty and other cities were eventually overrun by protesters, looters, angered over corruption and a lack of political reforms, and some unidentified violent armed groups.

President Kassym-Jomart Tokayev, fearful he was losing control of Almaty in what he said was a terrorist-led coup attempt, called on the Russian-led Collective Security Treaty Organization (CSTO) to intervene.

Amid the chaos, Tokayev used the opportunity to consolidate power. Security forces were given permission “to open fire with lethal force.” Meanwhile, Tokayev removed ex-president Nazarbayev from the Security Council, which the latter was supposed to chair for life.

Tokayev blamed the unrest on the national security services while its ex-chief, Nazarbayev ally Karim Massimov, was arrested on treason charges, indicating a power struggle within the government.

Nazarbayev has not been seen publicly since 28 December, and it’s unclear where he and his family are. On 8 January, Nazarbayev’s press secretary said the former president remained in the capital and was working closely with Tokayev to resolve the crisis, but offered no proof.

Five days later, Nazarbayev’s youngest daughter, Aliya Nazarbayeva, posted on social media that “it is wrong that people die in peaceful times.” She also expressed gratitude for the “many messages” of support her father had received from across the country.

Those posts and her accounts on social media have been deleted. They were the only public comments from the ex-president’s family since the protests began.

Pressing his advantage, on 11 January, Tokayev announced a series of reforms and in doing so, indirectly criticised the people close to the “first family” for the country’s socio-economic troubles.

He said that because of Nazarbayev, “a group of very profitable companies and very rich people have emerged” in Kazakhstan and it was time that everyone shared the benefits. While Tokayev is not wrong, it remains to be seen whether his reforms are genuine or self-serving.

But it’s clear that Tokayev is cementing power, which suggests that the influence of groups linked to Nazarbayev is waning.

The other beneficiary is Russian President Vladimir Putin, who has long sought to reassert Russia’s influence over former Soviet territory. While CSTO peacekeeping troops have begun to leave Kazakhstan following a mission that included protecting state and military assets, it seems likely the country will pay some price for the support.

After the CSTO arrived, Tokayev thanked Putin for his “comradely warm reaction” to the Kazakh appeal for help.

Now, as they depart, some analysts believe Tokayev used this unpopular move to solidify his position among the Kazakh political elite. If true, Kazakhstan’s ability to make some decisions independent of Russia might become limited.

Even as Tokayev pays lip service to improving people’s well-being, there has been no talk of the political reforms that protesters wanted.

What does all of this mean for the future of Kazakhstan?

What seems obvious is that Kazakhstan might become even more reliant on Russia, demonstrating a diminished ability to balance the influence of Washington and Moscow. Further crackdowns on civil society and the media are also likely, though the government will tread cautiously, wary of igniting more protests.

As for those who took to the streets in search of change, they will no doubt be disappointed in the outcome. Young people are frustrated by a lack of opportunities, the staggering costs of living, and the nepotism and corruption that makes the system run.

While they may have succeeded, at least for now, in their demands of “Shal ket,” the political system remains in desperate need of change.

People are ready to work for a brighter, independent, more equitable Kazakhstan. They just need the opportunity and chance to build it.