Bundestag approval doesn’t pave the way for a European Army 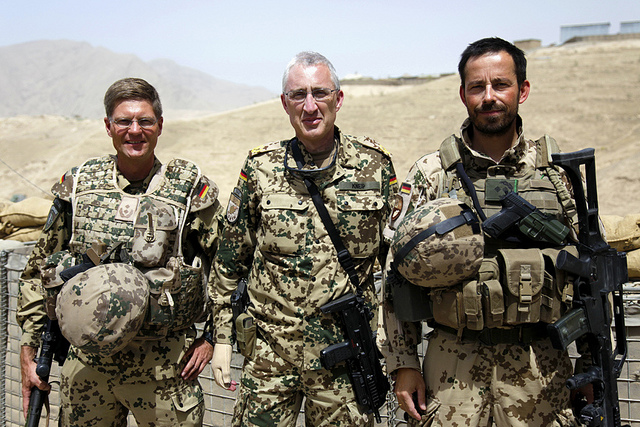 The report by Germany’s Rühe Commission on international deployments is only a first step towards further defense cooperation in Europe, write Christian Mölling and Alicia von Voss.

Dr. Christian Mölling and Alicia von Voss are doing research on European defense and security policy at the German Institute for International and Security Affairs (SWP). This text has first been published on the Stiftung Wissenschaft und Politik (SWP) website as “Point of View”.

The Rühe Commission’s report on the future of parliamentary participation in Germany is well-informed in its analysis of the status quo and related problems. However, its recommendations mainly focus on simplifying the approval process for tasks such as training and support missions. They leave aside the much more fundamental question that led to the establishment of the Rühe Commission.

Due to the progressive integration of the armed forces in Europe, the German Bundestag is confronted with the gap between the growing demand of partners, especially in NATO, for alliance solidarity and the preservation of national sovereignty. Europe’s armed forces are undergoing a fundamental transformation: Since the 1990s, European countries de facto have not been able to decide alone about participating in larger military campaigns, but are dependent on the political approval and the military support of their EU and NATO partners.

As parliaments have a say in military deployments in 17 European states, national parliaments are gaining in importance not only with regard to their own defence policies, but also with regard to the defence policies of partner countries. This mutual dependency will increase because single states lack the financial means for large national armies. Hence, ideas such as a defence union, suggested by former EU High Representative for the CFSP Javier Solana, or the Framework Nations Concept focus on the collective provision of military capabilities – without defining a concrete mission objective. The German government is not alone in its support for a strengthened defence cooperation and even a European army – the majority of parliamentary factions also back them.

At the same time, the German parliament insists on maintaining full autonomy in its decisions on the deployment of Germany’s armed forces. However, if one wants to set up joint defence units, states have to give up sovereignty. They would have to enter into mutual dependency long before deploying any troops. Although the government and parliament could refuse the deployment of their capabilities, they could not veto the overall mission.

In light of the contradictory efforts between defence integration and the preservation of autonomy, it was the Rühe Commission itself, which asked for a debate on the future design of the parliamentary prerogative. Unfortunately, it did not present any concrete arguments on the topic. Instead, its recommendations seek to anticipate a compromise in parliament. Nevertheless, the German Bundestag will need to engage in this debate. Three aspects will be key in this regard:

International cooperation requires international regulation, not only in Germany, but in all partner countries. Conversely, national rules have consequences for all partners. For that reason, the German Bundestag should have a look at the parliaments of other countries and consider alternative models of parliamentary participation. This way, it could gain more clarity on a reasonable model of parliamentary say. It would also underline that the responsibility for alliance solidarity does not only lie with Germany and the Bundestag, because even if Germany approves a military campaign, other countries can still reject it. This has occurred in the past when France and the Netherlands temporarily withdrew from NATO missions.

The conditions for successful defence cooperation are not only created during a mission, but long before: when the equipment is purchased. In this context, parliaments routinely block cooperation, because when purchasing arms they tend not to decide along the lines of military utility or cooperation potential. Rather, parliaments consider industrial bases and jobs. This is why Europeans bought 23 different versions of the same helicopter type and did not use the opportunity for cooperation and savings. To set the conditions for successful defence cooperation, the German parliament should deal with the consequences of procurement decisions.

Legislative amendments, as proposed by the Rühe Commission, can contribute to more legal certainty, but they do not change the fact that decisions on military deployments remain a political risk for government and parliament. Precisely because of that, it is a decisive signal to one’s army, partners and third parties for what reasons deployments are approved of. So far, the German parliament particularly discusses small details such as the type of weapon to be used in a military mission. It should instead ponder the strategic goals and risks of a mission. The German armed forces would not turn into a berserker army this way.

The German parliament must decide which consequences it draws from the suggestions of the Rühe Commission and the unfolding reality of increasingly integrated European armed forces. It has to clarify how national sovereignty can be passed on to the benefit of alliances such as the EU, NATO and the UN. So far, no harm was done by giving up sovereignty, not in Afghanistan, Kosovo or Mali. If anything, a strengthened alliance sovereignty allows for joint decisions to be followed by joint actions.