By Dimitri Dombret and Raanan Eliaz 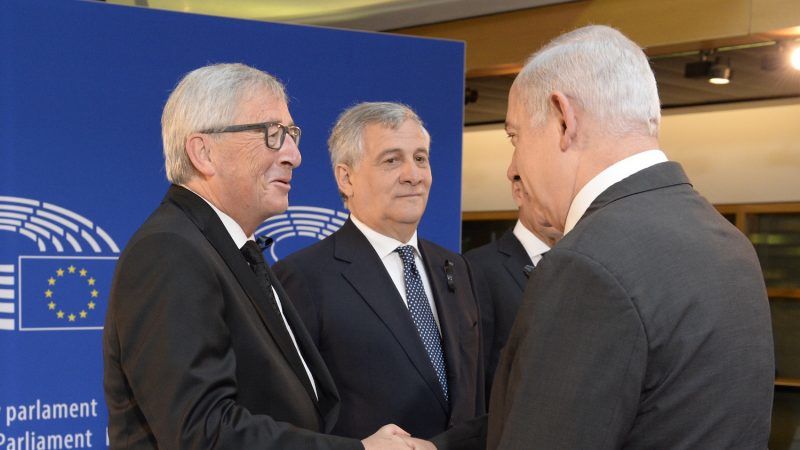 While political relations are at a current low, EU-Israel ties are steadily growing in areas less known to the public. Raanan Eliaz and Dimitri Dombret explain how economic and commercial ties, as well as more human interaction, could help rescue the dire political ties.

Raanan Eliaz is founder and former Director General (2007-2017) of the European Leadership Network (ELNET) and the Forum of Strategic Dialogue (FSD), two organizations dedicated to strengthening EU-Israel ties. Dimitri Dombret is the former Executive Director of European Friends of Israel (2006 until 2009).

In an unprecedented move, the EU agreed last week to seize funding of non-governmental organisations acting in Israel who openly oppose the existence of Israel and violate the EU’s own guidelines.

This is a first positive move on a sensitive topic, so no wonder the EU has chosen not to give it publicity. Nonetheless, EU-Israel ties are steadily growing in other fields.

Celebrating 20 years of fruitful Israel’s association to the EU’s Research and Innovation Programme last year, the Director General of DG Research Robert-Jan Smits underlined the successes achieved by the joint work of European and Israeli scientists.

The innovations, as stressed by Smith, involve key challenges like child tumours, chronic diseases and science education. On that occasion, Israeli companies like Teva, Athena and Ewave were mentioned as virtuous examples in Horizon 2020, the current EU research programme framework.

The project, which Israel’s prime minister labelled as a very “serious endeavour” for its European neighbour struggling to diversify its energy sources, represents just the latest milestone in surging EU-Israel commercial ties.

A serious European engagement with Israel is key not only for mutual growth but also to assist Middle East peace efforts, secure Israel’s position in the region and to maintain the historically strong commercial ties between EU member states and their Middle Eastern neighbours.

The framework of the political dialogue and economic cooperation between the EU and Israel and the legal basis for bilateral trade relations with Israel were settled in the EU-Israel Association Agreement, which entered into force in June 2000.

This agreement was only the first of a series of ground-breaking milestones in bilateral trade relations, which have opened up additional opportunities aiming to bring bilateral relations forward.

The most relevant examples are the 2010 EU-Israel agreement on agriculture and fisheries, which positively affected mutual market access, the 2013 Agreements on Conformity Assessment and Acceptance of industrial products (ACAA) and the 2013 the Open Skies Aviation agreement.

This comprehensive set of agreements led to a sharp increase in trade of products: the EU External Action Service registered that main imports to the EU from Israel in 2014 were chemicals and related products (27.1%), machinery and transport equipment (18.2%), and manufactured goods (16.2%).

The main exports to Israel from the EU in 2014 were in the same categories, i.e. machinery and transport equipment (37.2%), chemicals and related products (18%) and manufactured goods (17.7%).

In 2014, the EU remained Israel’s largest goods trade partner, accounting for 27% of Israel’s goods export and 33% of its imports.

We believe that areas in which Israeli companies and start-ups can significantly contribute to the development of the EU technology market in the near future are the following:

This entails that the EU has all its interest in keeping the partnership with Israel alive and well on track. To achieve this, the EU should do a far better job in reducing tension with Israel, and in addressing threats currently faced by Israel and Jewish communities in Europe.

First and foremost, the EU should take clear positions in defence of Israel against regional threats emanating from Iran, currently visible in Syria. The EU should stand on Israel’s side in containing the Iranian expansionism, especially considering that Iran benefits from strategic support from Russia.

The EU should also recalculate its steps regarding the current Palestinian leadership, which keeps reiterating anti-Semitic rhetoric and manipulative stagnation.

Secondly, EU countries should refuse to endorse the Boycott, Divestment and Sanctions movement in its entirety and should follow the path of several European authorities that have passed legislation against the boycott of Israeli goods. The municipality of Oviedo, Spain has done so recently.

And last but not least, EU member states should do their best to neutralize anti-Semitic trends revamping all across Europe: the current situation of diminished exchange and trust between Israel and mainstream European governments should not affect the Jewish citizens living in Europe.

To sum up, there is more than meets the eye when taking an expert long-term view on EU-Israel ties. Political relations are indeed at a current low. However, joint strategic interests and human connections remain abundant.

Be it in the field of the economy, security or culture, the EU-Israel alliance will survive changes in leadership and even regional conflicts. A steady mutual investment in whatever works today, will not only serve current shared interests. It will also lay the foundations for stronger political ties, when the time for that will be ripe.