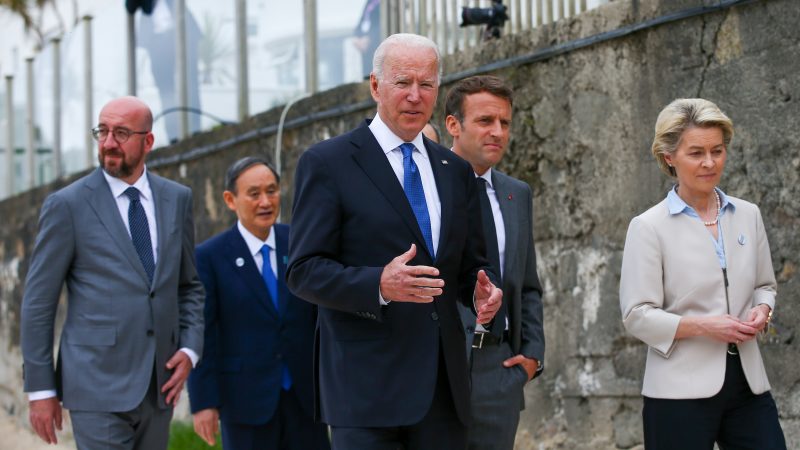 US President Joe Biden (C) and dignitaries at the leaders welcome during the G7 Summit in Carbis Bay, Britain, 11 June 2021. [Pool/EPA/EFE]

On global tax reform, the key question is whether US President Joe Biden will be able to persuade Congress to support the changes needed to implement a global plan to tax multinationals more fairly, writes Dick Roche.

When the OECD launched its Base erosion and profit shifting (BEPS) taxation initiative, the Obama administration, while supportive of the project’s aims, was cautious. The US lead negotiator commented that in the BEPS process every other country wanted the US “to pay for lunch.”

The Trump administration was less enthusiastic, refusing to sign up for the Multilateral Convention on BEPS in 2016 and reacting negatively to the March 2018 report “Tax Challenges Arising from Digitalisation.” President Trump did, however, move on the domestic front introducing the 2017 Tax Cuts and Jobs Act which changed the tax landscape for US owned multinationals making it easier for the US to engage with the BEPS process.

A significant shift in the US position was heralded in January when incoming Treasury Secretary Janet Yellen told Senators that she looked forward “to actively working with other countries through the OECD negotiations.” The French finance minister hailed the shift in US policy as opening the way for “a new international taxation system.”

With the US on board discussions on the BEPs process accelerated dramatically.  In June the G7 finance ministers, G7 leaders and G20 finance ministers endorsed the reform proposals. On 1 July the OECD announced that 131 of the 139 countries and territories involved in the framework discussions were on board with the proposals.  A final sign off on the proposals is expected at the Rome Summit of the G20 in October.

The reform package contains two “Pillars.” Pillar One allocates specified taxing rights over multinational enterprises [MNEs] with a global turnover above €20 billion and profitability above 10% from their home countries to the markets where they do business and earn profits. Pillar Two provides a minimum corporate income tax rate of at least 15%.

The progress made in June has attracted considerable hype. The minimum tax rate arrangement was the major headline grabber.

President Biden argued the minimum effective rate would “arrest the race to the bottom that’s been going on among nations attracting corporate investment at the expense of priorities like protecting our workers and investing in infrastructure.” Treasury Secretary Yellen called the agreement historic and urged all countries to get on board.

A cynic might question whether getting nations whose current corporate tax rates are above 15% to sign up a tax floor that is below the tax rate they levy can really be labelled “historic.”

There are more important points. The 10% floor on profits in Pillar One raises questions. Unless adjusted, that arrangement would exclude Amazon, with its market cap of $1.6 trillion and a track record of tax avoidance, not a big selling point.

Concerns arise regarding the exemptions in Pillar One. The exclusion of the mining and extractive industries that have major environmental impacts has raised eyebrows: likewise, the agreement to exclude the financial activities of the City of London. Other potentially controversial carve outs are likely.

There are more fundamental issues.  What is taxed and how much tax is to be charged goes to the heart of state sovereignty. Shifting responsibility for setting tax provisions and rates from national politicians who make policy in the open and are subject to electoral discipline to unelected tax administrators who operate behind closed doors at the OECD raises questions that should not be lightly dismissed. The American Revolutionary War slogan “taxation without representation is tyranny” remains relevant.

As the G7 consensus was emerging in June perhaps the pithiest public comment on the process came from Jersey’s First Minister, Senator John Le Fondré, who questioned the leadership role in which the US was being cast.

With President Biden in his sights, Senator Le Fondré suggested “some people need to look closer to home before involving themselves in the tax policies of others” adding “perhaps the US should look at states like Delaware before telling the rest of the world (what) to do.” Delaware, often dubbed “a domestic US tax haven” with more registered corporate entities than voters, was represented by Joe Biden in the US Senate for decades.

While Senator Le Fondré’s ire did not result in Jersey holding out on the OECD BEPS, he highlighted the incongruity of ceding any leadership role on tax reform to the US and the vulnerability of so doing.

Over the last 70 years, US lawmakers constructed a taxation system with avoidance baked into it. For decades the US tax system incentivised US corporations to delay paying US taxes by holding profits offshore. As at 2018 US MNEs were estimated to be holding more than $2 trillion offshore and were the prime contributors to the global problems that the BEPS project aims to cure.

US lawmakers turned a blind eye to how US multinationals treated foreign profits seeing the arrangements as giving domestic companies a competitive advantage while, in the long run, securing more tax revenue for the country by lowering the amount of foreign tax credits that authorities had to make when profits are ultimately repatriated.

The key question is whether President Biden will be able to persuade Congress to support the changes needed to implement the BEPS package. Without the US on board the process collapses.

From the outset opponents in Congress argued that the OECD reforms undermined US competitiveness, would encourage “companies to move high paid jobs out of the US” and subject US companies to “greater tax liabilities abroad.” President Obama was forcefully reminded that “it is Congress, and Congress alone, that has the ultimate authority to make changes to the U.S. tax code.”

Following the G7 meetings in June, Republican leaders on the Finance Committees of both Houses of Congress wrote to Treasury Secretary Yellen expressing particular concern about the Pillar One arrangements. The top Republican on the key tax-writing House Ways and Means Committee labelled the G7 outcome “a dangerous economic surrender” that “strips away our US tax base” and “favours foreign headquartered companies and workers over American ones.”

With critical midterm elections due in the US in 2022 and an increasingly toxic political atmosphere in Washington, opposition to the reform package will build further.  It will be difficult to win Congressional support. If the final form of the multilateral instrument giving effect to the agreement is cast as the equivalent of an international treaty, getting the 67 votes needed for ratification in the US Senate would require a miracle.