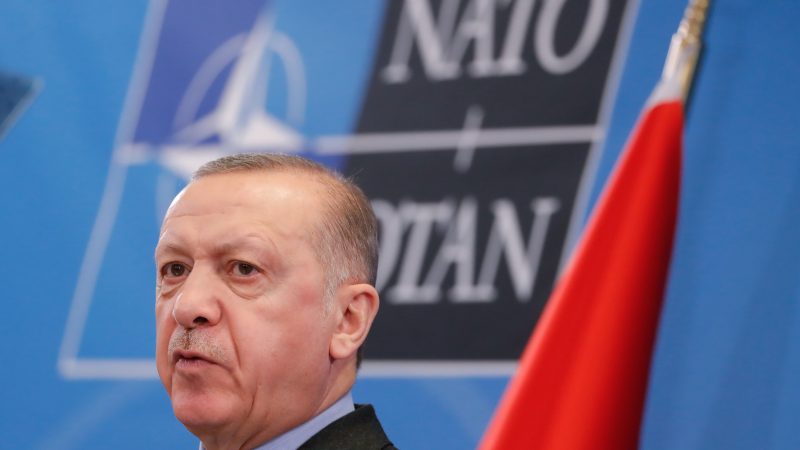 Turkish President Recep Tayyip Erdogan gives a press conference at the end of a Group of Seven (G7) Leaders meeting at the Alliance headquarters in Brussels, Belgium, 24 March 2022. [EPA-EFE/STEPHANIE LECOCQ]

Turkey’s President Recep Tayyip Erdoğan tends to shoot first and ask questions much later, and he is clearly making the same mistake once again with the NATO enlargement issue, writes Henri J. Barkey.

Henri J. Barkey is the Cohen Professor of International Relations at Lehigh University in Bethlehem, Pennsylvania, and an adjunct senior fellow for Middle East studies at the Council of Foreign Relations.

Vladimir Putin’s war on Ukraine has sufficiently alarmed Finland and Sweden for them to reverse decades-long policies and apply for immediate membership of NATO. What appeared to be a no-brainer for the alliance has quickly hit a roadblock in Turkey’s mercurial president, Recep Tayyip Erdoğan.

Citing political differences with the two countries, which he finds overly indulgent of Turkish-Kurdish opposition groups and personalities, he declared that Helsinki and Stockholm should not even bother sending representatives to Ankara to discuss the issue. He would not assent to their membership.

NATO guidelines require unanimous consent among members when it comes to admitting new countries into the alliance. Turkey is no ordinary NATO member. Its location, south of Russia, control of access to the Black Sea, borders with Syria, Iraq, and Iran, and long Mediterranean coast have all contributed to its importance to the alliance.

Turkey has successfully parlayed its strategic location into a bargaining position that often forces its allies to back down and allow for its excesses at home and abroad to be overlooked by its allies, especially Washington.

However, Erdoğan of late has found himself increasingly at odds with his traditional allies who are resisting his policies and demands. Turkey’s intensifying authoritarianism under his one-man rule has been subject to criticism as his opponents are dispatched willy-nilly to long jail terms following sham trials.

Moreover, members of the Turkish government have continuously blamed Washington for the July 2016 failed coup attempt – an astonishing accusation that casts a shadow on Turkey’s most important relationship.

However, the event that most shook Washington was Turkey’s decision to purchase Russia’s S-400 anti-aircraft missile system. Erdoğan insisted on the acquisition despite several warnings that he was endangering Turkey’s securing of the alliance’s fifth-generation combat aircraft, the F-35.

He simply ignored the many high-level American entreaties believing perhaps that in the end, Washington as usual would concede. He was in for a shock; not only was the F-35 sale cancelled at a tremendous cost but the plane’s manufacturing hubs in Turkey were dismantled and the US Congress imposed sanctions on Ankara.

These are not the only issues rankling the bilateral relationship. There is the US prosecution of a state-owned Turkish bank, Halk Bank, for evading Iran sanctions. Erdoğan has repeatedly asked that the White House dismiss the case. He does not seem to understand that in the US, the executive cannot interfere with the judicial branch unlike in Turkey where he often micromanages legal cases and guides prosecutors and judges.

Erdoğan must have also been exceedingly bitter at the reception given to the Greek prime minister, Kyriakos Mitsotakis, in Washington just when the Swedish and Finnish NATO applications had become the talk of the day.

Mitsotakis was not only received at the White House by President Joe Biden, but he also addressed a joint session of the US Congress that gave him many standing ovations. Erdoğan has yet to be invited to Washington by the Biden administration.

Even if he were, he would never be asked to address Congress due to the scale of anger at Ankara for not just the issues mentioned above but also for its aggressive behaviour in the Eastern Mediterranean, the bullying of Greece and Cyprus, interventions against the Syrian Kurds who aligned themselves with the US in the campaign against ISIS and many other points of contention.

Many in Congress and the administration believe that it was the Syrian Kurds who finally helped defeat ISIS.

Erdoğan’s objections may also have helped Russian leader Vladimir Putin, whose initial statements opposing NATO expansion were extremely severe. He toned down his own protestations when Erdoğan emerged as the primary roadblock. This too will damage Ankara’s stand in Washington.

On Thursday, Biden gave his full backing to Finland and Sweden in their applications to join NATO.

Paradoxically, the Biden administration was ever so carefully, congressional opposition notwithstanding, moving to approve the sale of new F-16s to Turkey. With the cancellation of the F-35 program, Turkey desperately needs to upgrade its current fleet of combat aircraft. Erdoğan’s outbursts on Sweden and Finland will probably further jeopardize the likelihood of Congressional assent.

Erdoğan tends to shoot first and ask questions much later. After years of bitterly denouncing several Middle Eastern countries, ranging from the UAE to Egypt and Israel, Erdoğan has recently initiated a hat-in-hand reconciliation effort with them.

In so doing, he has indirectly acknowledged that his diatribes against them did not achieve much and in the end, found himself isolated.

He clearly is making the same mistake once again with the NATO expansion issue. Instead of raising his objections and demands quietly behind closed doors, he has chosen to go public. In so doing, he is eschewing his leverage while simultaneously damaging Ankara’s image at a time when Turkey needs foreign investment, tourists, and much other goodwill.

Sweden and Finland will eventually become NATO members. The only question remaining to be determined is when. Turkey will find that its demands will not be met.

No “terrorists,” that is Turkish-Kurdish political refugees, will be forcibly repatriated nor will Swedish financial aid to Syrian Kurds come to an end, especially since the US is doing the same and more. Erdoğan will find once more that his influence has significantly diminished if for no other reason but his own behaviour.