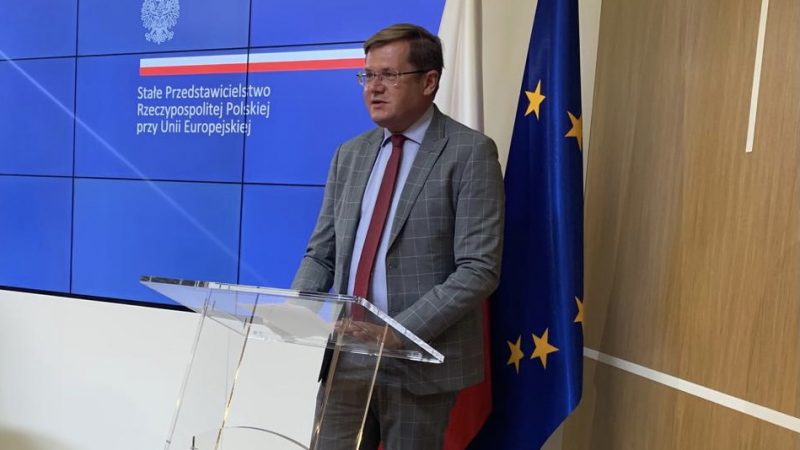 New opening in the EU-US relations is currently viewed to be one of the top priorities of EU’s foreign policy. Poland advocates and supports a special kind of relationship with the US by focusing on the issues that unite both sides of the Atlantic, writes Andrzej Sadoś.

We should strive together to ensure further development of our economies, which can only be achieved by guaranteeing peace in Europe. Thus, security and EU-NATO cooperation remain to be a key pillar of the transatlantic relations.

With the shared majority of members and highly convergent perception of threats and challenges, both organizations do not, and in fact, cannot compete but use their specific tools and resources to provide for shared security of their territories and neighbourhood.

While Europeans should take up a bigger burden in maintaining their own security, the common culture of cooperation should remain coupled with robust relations with and within NATO and a partnership with the US.

Another approach that Poland supports and expects the US to maintain under the new administration is the position opposing completion of Nord Stream 2.

Washington has been consistent and detrimental across multiple administrations to completion of this harmful project.

We do not understand reservations some member states have towards the US longstanding practice to promote energy security through diversification of energy supplies by country of origin and path of delivery.

For anyone in the West who pursues “business as usual” relations with Moscow, the country’s aggressive policies towards its neighbours, the poisoning of its opposition leader Alexei Navalny, or indeed his recent arrest, are just a few reasons why this approach is very harmful.

How come this is better understood on the Capitol Hill but remains somehow foggy for some in the EU.

Russia, through its pipeline politics, seeks to exploit the divisions within the EU and exert the economic pressure on Central and Eastern Europe, in particular on Ukraine.

There is no reason to believe President Biden’s administration will give up strengthening of NATO’s Eastern Flank by disregarding the energy security dimension.

Poland, willing to do its share on a difficult path towards climate neutrality, will need to continue the enhanced cooperation with the US on the LNG, nuclear energy and the development of renewable technologies that may contribute to reaching the more ambitious climate goals.

We hope the reinvigorated US-EU Energy Council could play a significant role in framing and advancing the discussion in the years to come.

We thus look forward to working with the new US administration on the Eastern policy.

We should act together to address Russia’s aggressive behaviour in the EU’s neighbourhood and its hostile actions undermining our transatlantic alliance.

Territorial integrity and sovereignty of Ukraine should remain high on the transatlantic agenda.

Poland has always been an advocate of strong economic ties and close cooperation in trade between the EU and the US.

We need to create conditions for the resolution of existing disputes, such as taxation of digital services and subsidies concerning aircraft sector.

Together we could more effectively address global challenges such as erosion of the multilateral trading system or threats arising from the Chinese economic model.

In this context, the EU-China Comprehensive Investment Agreement (CAI) if not handled well can be an obstacle in the relations between the EU and the US.

While it is presented as an attempt to put some pressure on China to open its market, create a level playing field and to act for the sustainable development, including climate and labour, this can only be achieved by aligning our position with that of the US.

We regret that such an important political agreement with China was reached hastily with just the slightest opportunity to scrutinize the text. It is high time we have a debate in the EU on the geopolitical implications of the CAI.

Another global challenge to be addressed together is the threat posed by Iran going nuclear and the turmoil this could create in the region.

The EU can play a constructive role in the Middle East by facilitating talks between Iran and the U.S. on the return to JCPOA compliance.

Successful EU’s brokerage could prove its strength and geopolitical relevance.

Poland continues to believe that the JCPOA remains an important element of global non-proliferation architecture and should become the basis for further negotiations aimed at normalizing the situation in the region.

Last but not least, in our dialogue with the new US administration, we should focus the renewed transatlantic agenda on promoting the rules-based international order and free competition.

The EU and the US should jointly address most pressing global issues such as eradicating the pandemics, rebuilding the economy and mitigating climate change.