‘EU politicians advocating to save Putin’s face are wrong’ 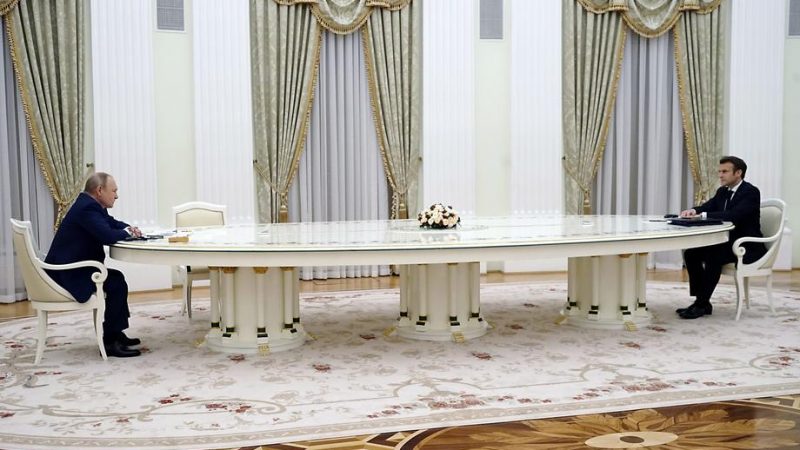 European politicians who appeal to make a peace treaty with Russia or argue about the need to “help Putin save his face” share responsibility for all Russian war crimes in Ukraine. The blood of Ukrainian civilians and children writes Roman Rukomeda.

Roman Rukomeda is a Ukrainian political analyst. This is his 51st account of Russia’s invasion of Ukraine.

The 79th day of war against Ukraine is coming to an end. The Russian army has not had any significant success in Ukraine and is showing its profound weakness. It is a fake colossus with large numbers of soldiers but is equipped with old weapons and lacks competent leadership, tactics, logistics and quality.

There will be an inevitable international tribunal and punishment for all the crimes that Russians have committed in Ukraine and continue to do on captured Ukrainian lands in the East and South of the country. Russian aggressors commit numerous crimes against Ukrainian civilians in the Kherson region, killing, torturing, raping and robbing many of them, especially those who support Ukraine.

They are doing the same atrocities as in Bucha, hoping to avoid punishment. The main Russian goal is to destroy the Ukrainian state and people and genocide against the Ukrainian nation. Part of this strategy is kidnapping and illegally moving from Ukraine thousands of its citizens, including children.

Ukraine’s future is being destroyed by planting tens of thousands of land mines in many regions which will require many years to clean the territory, and many people will be killed along roads, in forests, near lakes and rivers.

Putin’s terrorists declined requests to evacuate all wounded soldiers and the rest of the civilians from destroyed and demolished Mariupol. Proud Mariupol refused to be a part of the “so-called Russian world”, and now it is wiped out and sank in the blood of its residents. But it continues to resist and will do so till the end.

Against this background of Russian state terrorism and atrocities, some European political leaders, who used to be the supporters of Putin in the last years, are now starting to talk about possible negotiations with Russians and the need to “save their face”.

Since the beginning of aggression and war against Ukraine, Russia has not had any face, including in politics. It is a fascist state that needs to be stopped and punished. Otherwise, Russia will bring a big war to Europe and EU countries. The only way to stop this war is to defeat Russia by military means in Ukraine.

The Ukrainian people and nation from its side will not accept any peace treaties with Russia and security guarantees from it, as there is no trust in Russia and its leaders. True guarantees for Ukraine are its membership in the EU, the process has started, and NATO. Russian cries that it will not tolerate Ukraine’s membership in the EU should not bother anyone in Europe. Russia’s officials should think about the future of their country and destiny, which is very gloomy.

At the level of society, more than 90% of people insist on liberating all captured territories and are ready to fight till the end. So, even if President Zelenskyy decides to sign some document with Russians about leaving them captured parts of Ukraine, this will not stand as the Ukrainian nation will be firmly against it.

There will be no compromises with Russia until the complete liberation of Ukrainian territories is possible. All other attempts to stop the war with a temporary treaty will be just putting the war on pause, which is not acceptable for both Ukraine and civilised democratic Western democracies.

Now there is a unique chance to stop raising Russian fascism before it burns the whole of Europe. It is vital for the world’s security not to stop half the way and let Russia escape the punishment for its crimes and war in Ukraine. All those politicians who are appealing to the necessity to make a peace treaty with Russia by Ukraine’s territorial cost or talking about the need to “help Putin save his face” are sharing responsibility for all Russian war crimes in Ukraine and the blood of Ukrainian civilians and children.

Ukraine and its allies and partners will not allow Putin’s Russia a new chance to regroup and prepare for the latest round of war in Europe. After the entire Ukrainian counter-offensive starts in the coming weeks, Russian leadership and its hidden European partners and leaders will actively push Ukraine for negotiations with Russia.

The goal of this will be to help Putin avoid military defeat, which will give him a new chance to prepare for further war in Europe and the world. But it will not work this time. Russian war criminals will not avoid punishment. The price Ukraine paid for this and continues paying is too high. New Russian fascism must be thoroughly destroyed for the sake of peace and the future in Europe.