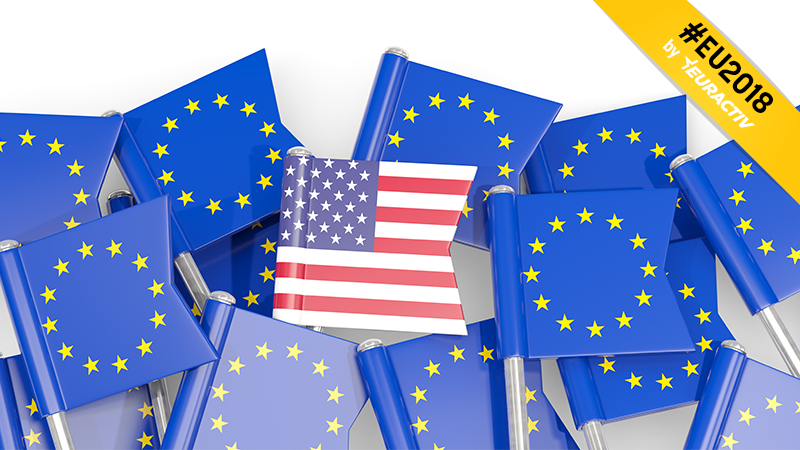 Despite the well-known differences on trade, climate change and Iran, a closer examination of the EU-US strategy reveals a number of shared priorities for 2018, writes Fraser Cameron.

Fraser Cameron is Director of the EU-Asia Centre and a Senior Advisor at Cambre Associates.

Much of the European commentary following publication of President Trump’s national security strategy (NSS) in December was highly critical. But despite the well-known differences on trade, climate change and Iran a closer examination of the strategy reveals a number of shared priorities.

Trump announced that the US was engaged in a new era of competition facing rivals such as Russia and China ‘that seek to challenge American influence, values, and wealth.’ This is similar to EU assessments that point to Moscow and Beijing’s aggressive foreign policy and attempts to undermine democracy. Trump went on to state that he hoped ‘to build a great partnership with those and other countries’ which again is what the EU is trying to do. The EU still describes its relations with Russia and China as strategic partnerships although this description realistically can no longer be applied to Russia as there is almost a complete rupture in relations following its annexation of Crimea and support for separatist forces in eastern Ukraine. And despite Trump’s reluctance to criticise Putin his administration has now agreed to provide defensive weapons to Ukraine, a move that Obama refused to make.

Another highlight of the NSS was trade policy based on ‘the principles of fairness and reciprocity.’ If you listen to the litany of EU complaints against China, calling for ‘a level playing field’ you can see the similarities with Trump’s approach. Both the EU and US are negotiating bilateral investment treaties with China and facing similar problems on market access. Brussels and Washington are also tightening their trade defence instruments vis-à-vis China.

Trump also called for greater attention to homeland security and confirmed his intention to build a wall on the border with Mexico. The EU may not go in for building walls but some of its member states have erected pretty daunting fences to deter migrants. The EU has also struck a Faustian deal with Turkey and Libya to reduce the flow of refugees to the EU.

Another priority for Trump was modernisation of the military. Again this has been a top theme for Federica Mogherini with the December European Council endorsing her proposals for closer defence cooperation (PESCO). She has boasted that ‘more has been achieved in the past ten months than the past decade’. She will soon discover, however, that securing agreement on paper is one thing, securing agreement to rationalise defence procurement let alone place troops in harm’s way is quite another.

Although he emphasised the need for a strong economy, Trump also recognised the need to strengthen alliances to cope with new threats. Yes, these allies should pay more for their own security but there was no talk of the US going it alone in today’s world. Trump’s call for Europeans to pay more is also not new. It was a running theme of the Obama administration with his defence secretary, Bob Gates, starkly warning Europe that Americans were fed up with paying the lion’s share to defend Europe. The fact that his warnings were largely ignored by most EU governments has led Trump to up the rhetoric but it is not a change in American policy. Chancellor Merkel seemed to get it when she said last October that Europeans will have to look after their own security. But Berlin has been a laggard in moving towards the 2% NATO target for defence spending.

Trump is often and rightly criticised for not mentioning human rights as a foreign policy commitment. But he did say that while the US did not seek to impose its way of life on anyone it would champion American values without apology. He tends to use ‘freedom’ rather than human rights or democracy in his speeches but this is also a shared value with Europe.

The actual NSS document thus offers a certain continuity in US foreign policy although for domestic reasons Trump sought to distance himself from the ‘misguided views’ of his predecessors. They had been responsible for negotiating ‘disastrous trade deals’ at the expense of American jobs. They had failed to build up the nation at home, failed to fund the military, and failed to insist that America’s allies pay their fair share for defence. They had neglected the North Korean nuclear menace, made a ‘disastrous, weak, and incomprehensibly bad deal with Iran’ and had surrendered US sovereignty to ‘foreign bureaucrats in faraway and distant capitals.’

But all this was changing said Trump. He defended his decision to withdraw from the Trans-Pacific Partnership and the ‘very expensive and unfair’ Paris Climate Accord. He said that he had scolded the NATO allies who were not paying their fair dues. He promised that North Korea ‘will be taken care of’ without offering any details.

A sensible EU approach would be to seize the opportunities in the NSS to enhance cooperation with the US especially in dealing with Russia and China. The EU should also continue to reach out to different constituencies in the US to support EU objectives – Congress on the Iran deal, the individual states such as California on the Paris climate agreement. And above all the EU needs to have a serious discussion, post Brexit, about how to take more responsibility for its own security. Trump may have done the EU a favour by kick-starting this debate.