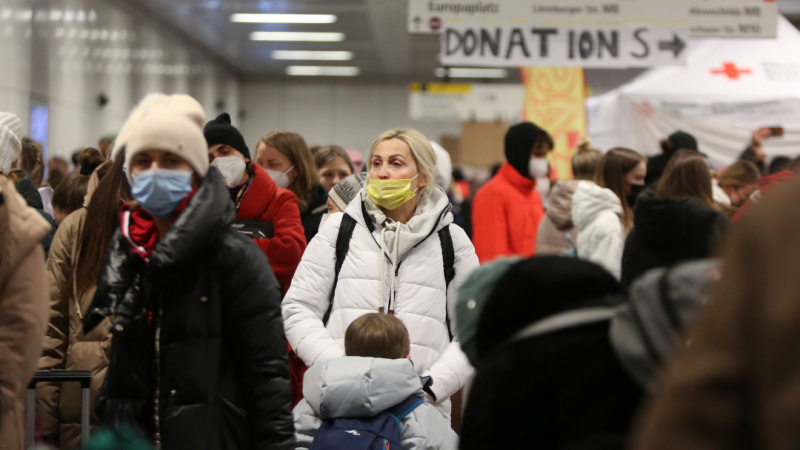 Ukrainian refugees at a reception centre in Germany. [© European Union, 2022]

We are 100 days on from the invasion by Russia of Ukraine on 24 February, when peace in Europe was shattered. As the human tragedy began to unfold and with more than 6.8 million Ukrainians, mostly women and children, escaping their country since the start of the war, European citizens have been watching developments with increasing concern.

Massimiliano Mascherini is the Head of Social Policies at Eurofound.

Capturing this critical moment, Eurofound carried out a survey in April 2022 asking over 40,000 people living in Europe their views on a range of issues, including the war in Ukraine.

Of these, 76% expressed high or very high concern about the war, with higher rates recorded in some of the countries sharing borders with Russia, such as Finland, Poland and the Baltic states, as well as southern Mediterranean countries and Ireland.

Solidarity is very high and translates into active and practical support measures, with 80% of respondents agreeing with both the EU and national approaches to providing housing for refugees and more than 84% of respondents supporting the EU and its Member States in supplying humanitarian aid to Ukraine.

Figure 1: Share of people expressing high or very high concern about the war in Ukraine, EU27 (%)

Over 70% of respondents agree with the imposition of economic sanctions on Russia, with about two-thirds of them actually thinking more stringent sanctions should be imposed. This is particularly the case in the Scandinavian countries, the Baltic states, Romania, Poland and Ireland. Even on the more sensitive issue of military support, 66% of respondents approve of the EU’s military support to Ukraine (albeit 34% think the EU has done too much in this area).

The practical response of citizens also mirrors these wide-ranging national and EU efforts, with about a third of respondents indicating they had already donated money to support Ukraine at the time of the survey. The same proportion had donated goods, such as clothes and medical supplies, with more planning to do both.

Figure 2: Opinions on the EU response to the crisis in Ukraine, EU27 (%)

Figure 3: Opinions on the national government’s response to the crisis in Ukraine, EU27 (%)

However, one of the largest overriding concerns for policymakers is that Europe’s solidarity and cohesion may be threatened by the impact of the rising wave of disinformation campaigns being waged across the world, some of which have pivoted from COVID-19 directly onto the war in Ukraine. For example, 24% of those who use traditional media as their main source of information do not support European sanctions against Russia, while this share increases to 39% among those who use social media as their main information source, and 45% among those who have not been vaccinated against COVID-19.

Similarly, sanctions are not supported by 24% of those who are satisfied with how democracy works in their countries, while the rate increases to 39% among those who have low satisfaction levels, and increases again to 46% among the non-vaccinated population.

Policymakers would be well advised to address these immediate economic and social concerns of citizens, to consolidate their trust in institutions. Without this, there is a danger that support and solidarity for EU actions in Ukraine will come under serious threat.

The complete results of the fifth round of Eurofound’s Living, working and COVID-19 survey will be published in early July – sign up here to be notified.