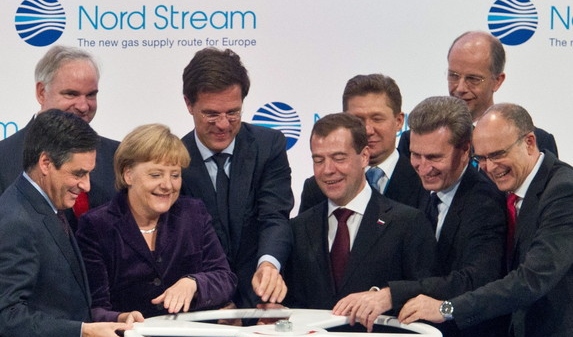 Unlike the naïve West, Russia knew perfectly well what it was doing by building the first Nord Stream pipe, which came onstream in 2011. Andreas Umland ponders if anything has changed until the present day when Nord Stream 2 is completed.

Andreas Umland is an Analyst in the Stockholm Centre for Eastern European Studies at the Swedish Institute of International Affairs (UI).

An extensive outline of this argument may be found in: “Germany’s Russia Policy in Light of the Ukraine Conflict: Interdependence Theory and Ostpolitik,” Orbis, vol. 66, no. 1, 2022, pp. 78-94.

A major determinant of Ukraine’s geopolitical position until about a year before the Euromaidan Revolution was its mutually dependent relationship with Russia, a petrostate and worldwide exporter of energy, due to the large Ukrainian gas transportation system (GTS). Until 2011-2012, more than half of the West Siberian and Central Asian natural gas coming from Russia for the EU flowed through Ukraine. The annual revenues of the state-owned conglomerate Gazprom from its gas exports to Europe were then and remain today critical for the functioning of the entire Russian socio-economic system as well as certain foreign political operations.

Gazprom subsidises businesses, agencies, and households throughout Russia and some allied entities, such as Belarus or Transnistria, with special price policies. Moreover, Gazprom also supports many not-for-profit projects in and outside Russia. In doing all of this, the monopoly draws largely on the high income from its lucrative international trade outside the post-Soviet space.

Ukraine’s high geo-economic leverage vis-à-vis Moscow through its control of a large share of Russian gas exports until 2011-2012 was and, to a lesser degree, today is more important than the financial aspect of this interdependence. For the first twenty years after the break-up of the USSR, Kyiv could have cut off more than half of Russia’s natural gas exports to the EU at any moment. Russia had only limited alternative gas transport options until about a year before the Euromaidan Revolution began.

In September 2011, the interdependence of Kyiv and Moscow was already reduced by the commissioning of the first leg of the Nord Stream pipeline through the Baltic Sea. It decreased again after the ceremonial opening of the second leg of the first Nord Stream pipeline by German Chancellor Angela Merkel in October 2012. The third reduction of Russian-Ukrainian interdependence occurred with the start of gas flow through the Turkstream pipeline via the Black Sea in January 2020. The start of operation of the Nord Stream 2 pipeline would make the Ukrainian GTS redundant for the EU-Russia gas trade. This change is feared in Ukraine and in such EU countries as Slovakia, Poland, and the three Baltic countries. The project would have more serious geopolitical consequences than the often-cited loss of revenue that Ukraine would suffer from further detour of Russian natural gas to a new Baltic pipeline.

The complicated geo-economy of Eastern Europe is often presented incompletely or distorted in Western mass media and even in some relevant expert debates. The Ukrainian revenues from the transportation of Russian natural gas are often not set against Kyiv’s significant costs for maintaining and modernizing the existing transmission service. Ukrainian expenditures for ensuring are often compared incompletely with the total costs of the construction and maintenance of the underwater Nord and Turk Stream pipes and their domestic supply infrastructure. The environmental costs of Gazprom’s projects are partly illuminated in the relevant press, and expert reports, yet have been assessed only insufficiently in governmental, industrial and public deliberations so far.

Over the last decade, supporters of the two Nord Stream projects have been circulating an allegation that the Ukrainian pipeline network is on the verge of physical collapse. However, this seemingly plausible assessment of post-Soviet industrial capacity becomes more questionable with every year of mostly reliable gas transit through Ukraine. If one believed rumours that have been spread in Brussels, Berlin, Vienna, and other Western European capitals for many years, Ukraine’s capacity to transport Russian natural gas should have declined or disappeared during the last years – due to the allegedly decrepit condition of the Ukrainian pipeline system.

Russia’s political and economic pressure on Ukraine increased quickly after the completion of the construction of the first new subsea pipeline from Vyborg to Lubmin in late 2012. In August 2013, for example, Moscow blocked all trade between Russia and Ukraine for about a week. This blockage was a warning against Kyiv’s planned signing of an association agreement with the EU. Russia’s political rhetoric, public diplomacy, and propaganda machinery ran hot against Ukraine’s drift toward the European Union when pro-Russian President Viktor Yanukovych was still in power and when his soon demise was not yet foreseeable.

On February 20, 2014, two days before Yanukovych was thrown out of office by Ukraine’s parliament; a large-scale Russian military intervention began in the southern Ukrainian peninsula of Crimea. Shortly thereafter, Yanukovych fled to Russia. Moscow actively incited pro-Russian activists to revolt against Kyiv in several cities in eastern and southern Ukraine in March 2014. In April 2014, a paramilitary group led by notorious Federal Security Service (FSB) veteran Igor Girkin sparked a pseudo-civil war in the Donets Basin. In fact, his irregular armed unit started a delegated Russian war against Ukraine, which soon also involved regular Russian troops such as the infamous BUK anti-aircraft unit that accidentally shot down Malaysian Airlines flight MH17 on 17 July 2014.

Since then, Ukraine has been marked by foreign occupation, a simmering conflict, sometimes high- and sometimes low-intensity warfare, and a partially failed state. With this fatal development, the Ukrainians, in many respects, merely followed the earlier fates of the Moldovans and Georgians. The 2014 Russian-Ukrainian escalation in Crimea and the Donetsk Basin confirmed the validity of the interdependence theory and relevance of this aspect of German Ostpolitik over the past 50 years. Like the way modern states often experience political – as the Germans say – Annäherung durch Verflechtung (approximation through entanglement) of their economies, the economic disentanglement of nations can lead to their rapid alienation. This, at least, is suggested by the soon escalation of Russian-Ukrainian tensions after the first Nord Stream pipeline went into full operation in late 2012.

The post-Soviet republics of Moldova and Georgia, which are also Western-oriented but have always been far less economically intertwined with Russia since the Soviet Union’s collapse, were in a geo-economically different position from Ukraine from the beginning. Chişinău and Tbilisi, unlike Kyiv, never possessed significant economic leverage over the former imperial centre. Therefore, unlike Ukraine, Moldova and Georgia never enjoyed the luxury of territorial integrity and political sovereignty. Chişinău and Tbilisi can now look back on almost 30 years of Moscow interference in their internal affairs. Once Russia’s partial dependence on Ukraine had sufficiently declined, by the end of 2012, it was only a matter of time until it would suffer the same fate as Moldova and Georgia.