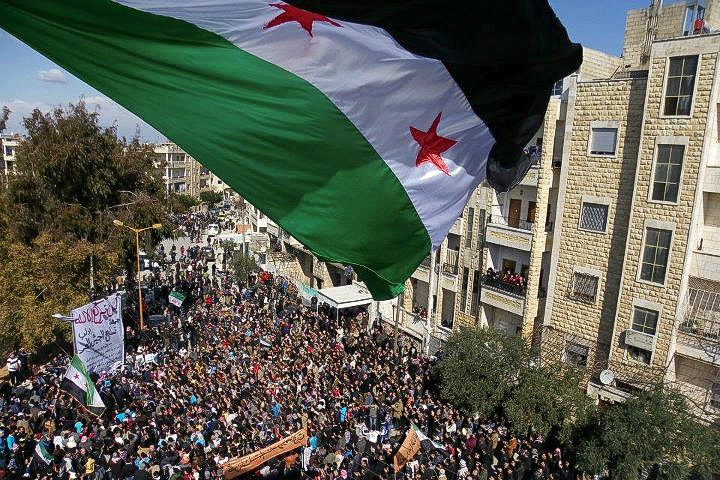 Mouaffaq Nyrabia is the Syrian National Coalition’s representative to the EU and Benelux.

Four years ago I joined millions of peaceful Syrians who took to the streets to protest against the dictatorship of Bashar al-Assad. Our demands were simple; that we be allowed to enjoy basic freedoms, human rights, and democratic rule. Four years on as the world’s attention shifts towards the threat of IS [Islamic State], the international community must not forget that the crisis in Syria began when our legitimate demands were met with brutal force by Assad’s security forces.

Assad’s intolerance towards the possibility of a free and democratic Syria has thrown my country into a crisis which has claimed the lives of over 200,000 Syrians. Instead of the freedom and democracy for which we risked our lives, we now find ourselves stuck between two extremes; a ruthlessly brutal regime clinging to power, and those who have twisted religion to justify their own barbaric political vision. On this fourth anniversary of the Syrian crisis, recognising that Assad’s tyranny and IS’s terror are interlinked is not only central to a just political solution to this conflict, but essential for the future of a free and democratic Syria.

Assad and IS are two sides of the same coin. The chaos and instability created by the unrelenting brutality of Assad’s military, his militias and his external supporters –Russia, Iran and Hizballah – has been the incubator for extremism to take root in Syria. Assad has sought to convince the international community that the Syrian uprising was led by extremists. This sham narrative has been exposed and should not be forgotten.

At the start of the crisis, Assad deliberately let loose AQ operatives – who he and his father had supported in the past – from Syria’s prisons to wreak havoc across my country. It is no coincidence that Assad has directed the vast majority of military attacks against the Free Syrian Army (FSA), not IS.  Just last week the European Union sanctioned regime officials including a close friend of Assad for buying oil from IS. This confirmed what many Syrians have long known: the Assad regime is actively funding the criminal forces of IS.

Four years on, some now claim that siding with Assad is the best option to defeat IS, the “lesser of two evils”. But siding with Assad is an affront to Syrian demands for basic human rights and freedoms, and goes against everything the European Union stands for. It would also be a severely limited approach to the interlinked threats of Assad and IS. If the international community is to stop IS’s growth, it must deal with the root cause – the Assad regime.

Despite the many challenges and despair Syria faces today, we still hope to overcome the crisis through a process of political transition. This has been – and remains – the overall goal of the Syrian National Coalition. But in order to make the political track viable, the international community will need to take a comprehensive approach to the conflict.

First, the US-led coalition must coordinate its efforts against IS with our moderate opposition forces on the ground. We have seen how this cooperation was effective in defeating IS in Kobane. The same strategy needs to be applied across Syria. We need increased support to the FSA to change the military balance on the ground. We welcome the US train and equip programme. But it is not at the required scale or speed to tackle the magnitude of the threat from both Assad and IS. And we drastically need protection from Assad’s air force, which is killing hundreds of Syrians, many women and children, week-in week-out.

Second, Assad and his backers in Moscow and Tehran must be put under more sustained and intense pressure. Until they sense that the regime is in danger, they will never make any concessions at the negotiating table. This is where targeted EU sanctions are having – and can further have – an impact in raising support for the political track. In particular, the Syrian National Coalition urges further measures against military suppliers and financiers to the regime and the use of information held by the UN Commission of Inquiry to sanction the perpetrators of war crimes. For too long the international community’s commitments to challenge Assad’s culture of impunity have fallen short. Now is the opportunity to hold human rights violators to account, including through efforts to refer the situation in Syria to the International Criminal Court.

Finally we urgently seek support from our international partners – and in particular the EU – for moderate governance structures on the ground. This includes support to Local Coordination Councils and our Assistance Coordination Unit. We need to give Syrians hope that the world has not given up on them, that all measures are being taken to ensure food and aid reaches those most in need, and that stabilisation plans are being developed for the Syria’s recovery.

I accept that none of these choices are easy for our international partners to take.  And I know many question the plausibility of Syria’s moderates defeating the regime.  They are wrong.  The FSA is still fighting strong in Syria’s North and South.  After four years of conflict, their courage, dedication and commitment to a better, freer future for the country is unyielding.  And we, the Syrian National Coalition, the political arm of the Syrian opposition, are intensifying our efforts towards unity inside in Syria despite all the challenges we have faced since our creation.

Without the right approach, we are heading inevitably towards an internationally-led ground war as the only way to maintain European security.  But if we take bold steps now, we can avoid another long and costly intervention in the Middle East.  That is why as we enter the fifth year of the conflict it is time for a new grand plan to end the most severe humanitarian crisis since World War II.  Implementing these steps requires the international community to work together and work with us and our forces on the ground.  With leadership and determination, we will end this crisis.