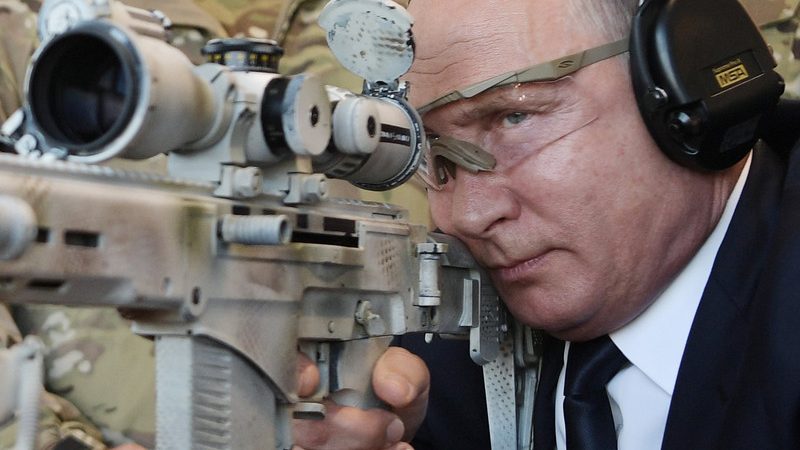 Putin’s mistake in Ukraine was that he compressed steps that usually take one year into a mere 24 hours, and it is not clear what prompted him to behave in such an unusual manner, writes Evgenii Dainov.

Evgenii Dainov is a Bulgarian academic, author and political commentator.

I have published two books in which Vladimir Putin features largely: one in 2008, the other in 2020. I have researched him thoroughly and have been wondering, for a month now, why this careful and crafty man made such a huge – indeed, terminal – strategic blunder, by starting his Ukraine war. Had he continued as before, patiently and shrewdly, he would have continued to amass real power and influence on the geopolitical stage. Instead, he staked everything on one headlong rush – and crashed spectacularly.

Have you ever watched a snake swallowing a frog? Initially, the snake, having snuck up behind the frog, bites it on the backside and holds. The frog flaps for a bit and then stops. Both attacker and victim lie there, frozen, for what feels like ages. The frog is obviously trying to adjust to this new situation. Then, inside a fraction of a second, the snake suddenly moves up its bite, another centimetre or so. Then – another period of complete inaction. After several more manoeuvres like this, the frog finally disappears inside the snake’s mouth.

This is what Putin was doing to us, “the West”, for two decades.

He snuck up behind us at the close of the 20th century, assuring us of his liberal and modern credentials, while blowing up residential buildings in Russia in order to blame the explosions on the Chechens and unleash the second Chechen war. The West, in his own words, “got agitated for a bit and then calmed down”. Then he set about strangling all opposition and free thought at home. The West “got agitated for a bit”, but was waved off with the claim that Russia was a separate and superior civilization, not to be judged by Western standards on democracy and human rights.

After killing off a few journalists and with the economy not being in the best of shape, in 2008 Putin conducted a lightning war in Georgia to rally support at home. The West got agitated for a bit, missing a much more important strategic picture: Putin’s preparations to penetrate Europe via what he then thought of as “the Orthodox crescent”. The idea was to subjugate Orthodox members and prospective members of EU and NATO, ending up on the Hungarian border.

During the sovereign debt crisis, he tried and failed to secure Cyprus and Greece with financial bribes; in 2016, a bungled coup attempt lost him Montenegro. This, nevertheless, left Serbia and North Macedonia as potential client states. By 2019, a new pipeline, Turk Stream, was constructed through Bulgaria to Serbia and Hungary in order to bring Bulgaria, a member of the EU and NATO, into the Kremlin’s sphere of influence. By that time, of course, Turkey, Bulgaria and Hungary were run by autocrats friendly to Putin.

By that time also, employing a flanking ideological manoeuvre, Putin had encouraged the West to sink into exhausting and destabilizing culture wars. As the West started asking itself what it actually believed in, Putin re-positioned himself as a Christian conservative and a traditionalist, standing against a pernicious “liberal ideology” that was going against the grain of human nature. By 2019 it was largely expected that such “traditionalists” as himself, with his active support, would dominate a Europe which he had already subjugated with gas and oil pipelines. In the White House, of course, he had a natural ally in President Donald Trump.

In 2014-2015, meanwhile, Putin had bitten off Ukrainian territories and absorbed Crimea into Russia. The West got somewhat more agitated than usual. But in the words of Alexander Dugin, the then ideological guru of Putin’s and a self-confessed fascist, “they (the West) will crawl back again – they need the gas and the oil”. Immediately, the expression “they will crawl back” became the prism through which the Kremlin looked at the West, while appointing its senior former politicians to the governing boards of its gas, oil and nuclear energy companies.

Unfortunately for Putin, the projected takeover of Europe by his “traditionalist” allies failed to materialize. Time and again, starting in 2017, the European demos beat back his allies in election after election. The ideological climate was changing, with prevalent winds blowing in a left-green-liberal direction. This set a bad example at home and Putin tightened the screws again, becoming a full-fledged dictator.

Having lost the battle of ideas, Putin saw his soft power eroding. With no economy worth boasting about, by 2020 Putin had to fall back on hard power to continue expanding his influence on the geopolitical stage. In the Russian context, “hard power” has always meant one thing: employing war as the continuation of politics.

The obvious course for him to take was to continue with the “snake-eats-frog” strategy: bite, wait for the West to stop flapping, then bite again. In Ukraine, this would have meant a series of tactical manoeuvres covering at least a year.

First, during the winter of 2022 recognize the independence of the Lugansk and Donetsk “people’s republics” and “respond favourably” to their requests to position Russian troops on their territory in order to defend them from “Ukrainian aggression”.

Second, once the West stopped getting agitated, back these “republics” in their claim that “Ukrainian occupiers” needed to be cleared out of the entire territory of the Donbas and Lugansk regions (the “republics” occupy just one-third of these administrative districts). The Russian army would back the “republics” in clearing out the “Ukrainian occupiers”, taking Harkiv and Mariupol in the process. The West, it was assumed, would this time become terribly agitated, but in a few months, with the winter of 2023 approaching, would “crawl back” for the gas.

And third, the masterstroke: sometime during that winter, Putin would declare that what remained of Ukraine was an unstable rump state run by a bunch of Nazis and was, therefore, a security risk for the entire region. It would have to be swallowed up, by Russia, to stop it from destabilizing all of its neighbours. This argument has impeccable historical pedigree, being the excuse that Hitler used to swallow the remains of Czechoslovakia after biting off the Sudeten region; and the excuse Stalin used in order to take over the eastern territories of Poland after Hitler had taken the western half.

The West, in Putin’s battle plan, would this time become truly agitated and slap really painful sanctions. There would be a few difficult months. But, as Dmitry Medvedev pointed out during the now-famous televised session of the Security Council at the beginning of the war, the West would inevitably “crawl back, bringing us everything we want, as it did before”.

By the onset of the winter of 2024, everything would be back to normal for everyone except Ukraine, which would no longer exist. Then Putin would have a couple of years of breathing space, during which to prepare for the takeover of Moldova, Georgia and at least one Baltic state. In the meantime, he would rapidly destabilize Bosnia and Herzegovina, splitting off the Serb component and joining it to Serbia, thereafter turning that country into a military outpost and subjugating neighbouring North Macedonia and Bulgaria – the “Orthodox crescent” rising from the ashes.

On the 30th year of his election as President, Putin would have subjugated and split Europe and placed intolerable pressures on NATO. A renewed Russian Empire would become a superpower on the model of the old USSR.

This was the plan that was becoming blindingly obvious, for anyone following Putin’s evolution, at least since the summer of 2021. And it could have worked, had Putin continued with his patient “snake-eat-frog” strategy.

But what in fact happened was something entirely different. He compressed steps one-to-three into 24 hours. This headlong rush united the West and, by re-packaging Putin as an international gangster, made impossible the establishment of the “Orthodox crescent” as well as the rise of the new Empire.

To suddenly rush things was a catastrophic strategic blunder on par with Napoleon’s rush into Russia two centuries earlier. Not only has Putin lost everything he had carefully built over two decades, but he has also put an end to his own rule and raised the spectre of Russia’s fragmentation into dozens of republics, princedoms and the like. Instead of taking over Europe and becoming the most feared leader in the world, Putin is putting an end to six centuries of Russian expansion.

It will be interesting, for future historians, to try and uncover the ‘why’ of this strategic blunder. Was Putin getting too old or sick to continue playing long strategic games? Was he becoming worried that, with his soft power eroding and his economy being left behind by the West’s entry into a new technological age, the time would soon come when his last remaining weapon, the military, would become irrelevant? Or was it something else entirely?

These questions will be investigated in the decades to come. For the time being, we can only state the obvious: Putin suddenly decided to stake everything on one headlong rush – and lost.