‘Receiving EU candidate status will be a big boost for Ukrainians’ 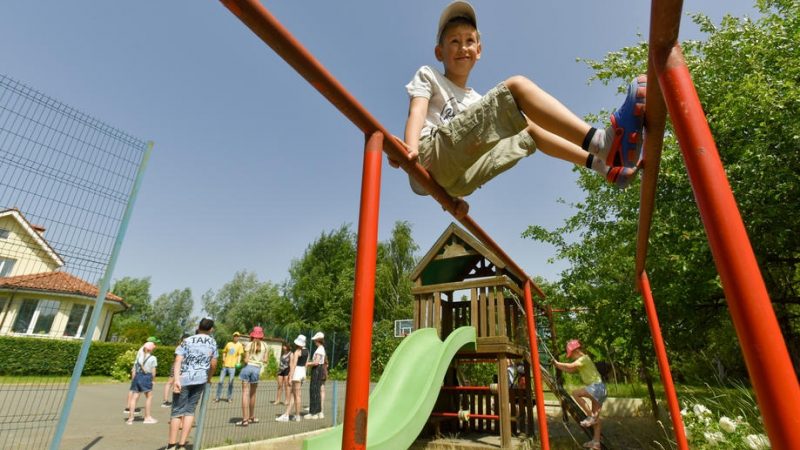 Children play at the summer camp set up for children from territories affected by the war, in the village of Semypolky, Kyiv region, Ukraine, 20 June 2022. The Seven Hills summer camp hosts some 300 children who were internally displaced along with their families as others came from territories recaptured by the Ukrainian forces. [EPA-EFE/OLEG PETRASYUK]

Ukrainians eagerly await the decision of the EU summit, fully supporting the reforms demanded by the European Commission for the country’s EU accession, writes Roman Rukomeda.

Roman Rukomeda is a Ukrainian political analyst. This is his 55th account of Russia’s invasion of Ukraine.

Today is the 117th day of the Russian war against Ukraine. Last week was optimistic for Ukraine from many aspects.

The main news was that the executive body of the European Union, the European Commission, has recommended that Ukraine be granted EU candidate status. This week at the meeting of the European Council on 23-24 June, the applications for EU membership by Ukraine, Georgia and Moldova in light of the EU Commission’s Opinions will be discussed.

Hopefully, Ukraine will be supported and finally receive official EU candidate status. The list of reforms demanded from Ukrainian authorities by the EU is fully endorsed by Ukrainian society.

Many experts, civil society activists and ordinary people want to completely reform Ukrainian society after the war’s end according to the best practices of the civilised democratic countries. EU candidate status is one of the best motivations to do this.

Ukraine also received the decision about additional military aid and support at the third meeting at Ramstein in Germany. That is the crucial and urgent aid to us that is needed now.

With the support of the NATO and EU countries and other international partners, Ukraine can successfully stop Russian aggression and organise its counter-offensive. One example of such help is the anti-ship rockets that NATO countries provided Ukraine.

The Ukrainian Armed Forces tested them on one of the Russian ships near the Snake island and sank the ship with the military cargo it was trying to deliver to Russian aggressors on occupied Ukrainian land. So now, the Russian Black Sea fleet is feeling very uncomfortable, and the number of sunk Russian ships in this war has reached 14.

However, the problem of the Black Sea blockade by Russian terrorists remains unresolved for Ukraine.

On the battlefronts, the situation remains complicated. Russian terrorists continue their attack in the Eastern direction, trying to reach the administrative borders of the Luhansk and Donetsk regions of Ukraine.

They are having minor success by moving up to 1-2 km per day with the help of brutal artillery, aviation and rocket attacks. At the same time, they are having heavy losses under Ukrainian fire, losing up to 200-300 soldiers and officers each day and tens of different vehicles, tanks and other equipment.

The level of destruction of Ukrainian towns, as the East used to be a heavily industrialised and urbanised area, is very high, which puts into question people’s further ability to live in such an area.

In the South, in the Kherson and Zaporizhzhya regions, the Ukrainian Armed forces are slowly moving in their counter-offensive, returning control over more lands in this area.

From the messages of the insiders on these occupied lands, Russian terrorists have done as they did in Bucha and towns around Kyiv – massively killing and torturing civilians, robbing and pillaging property, and destroying the local infrastructure.

That means the Russian invaders admit their retreat, so now they are trying to bring maximum damage to the Ukrainian people and territories in the Southern regions.

Also, the problematic situation remains with Putin’s military ally – Belarussian dictator Lukashenko- actively preparing his army and troops for the possible beginning of land intrusion against Ukraine in its Northern and Western areas. The presence. of Belarussian forces is not concerning, but they might complicate the situation for Ukraine in some Northern regions.

The Russian MoD reportedly reported that they deported more than 300,000 Ukrainian children to Russian territory yesterday, which is illegal. For Ukraine, it is principal to return these children and all the Ukrainian prisoners home after the war’s end as the lives of our people are the most valuable asset.

Moreover, Russian terrorists are trying to sell stolen Ukrainian grain from the Southern regions illegally. Ukraine will be grateful for the assistance of the international community in delivering its food exports to the international markets to avoid any problems with food on the global level.

We also hope that no countries would buy stolen Ukrainian grain from Russia. But for this, again, we need to resolve the problem of Russian state terrorism and piracy in the Black Sea.

According to the New York Times and Ukrainian sources, Russian troops have used at least 210 types of weapons banned by international conventions against Ukrainian soldiers and civilians during its military aggression against Ukraine.

Describing the general situation in the country, the governance and public administration on the state level of Ukraine remain stable. Ukrainian society has restarted in most cities, towns and regions the process of disconnection from Russian cultural influence and communication.

This is realised by renaming the streets or dismantling the monuments to some Russian or communist leaders. Many people who previously spoke Russian, especially in the Eastern and Southern regions, are now voluntarily switching to the Ukrainian language.

Putin’s aggression damaged Russian cultural influence in Ukraine, especially in the most Russian-speaking areas. That proves the poor strategic thinking and vision of the current Russian leadership.

But the real problem is the Russian state terrorism that should be stopped at all costs until it becomes too late. For this, the first step is to recognise Russia as a terrorist state.