Stop ignoring the refugee crisis and start working on solutions

By Joost Lagendijk and Monica Frassoni 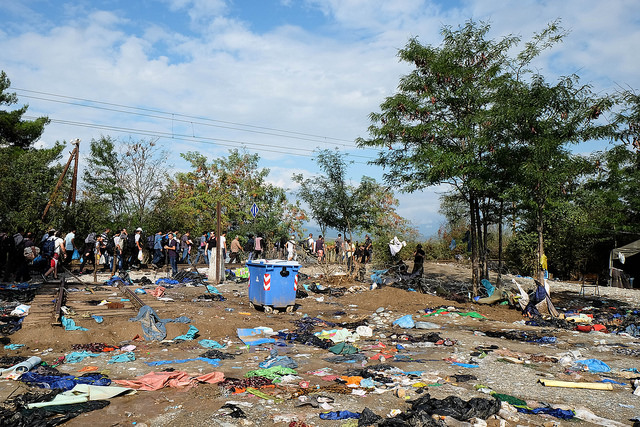 Nothing better demonstrates the decline of the EU as the pillar for common solutions than the painful scenes of refugees abandoned at Idomeni. The crisis is here to stay, so the EU must adapt, write Joost Lagendijk and Monica Frassoni.

In recent months, the EU has demonstrated an inability to live up to its values, with its member states unwilling to respect and enact common decisions, choosing instead go their own way by building fences and walls, irrespective of the fact that these are not legal.

Things did not have to be this way. Despite the crisis, it was and still is perfectly possible for the richest continent on earth to deal with the influx of refugees humanely and in an organised way, if only the political will to do so were there. The uproar and destabilisation that one million refugees entering the EU has caused in so many countries is really surprising, especially if we consider that Lebanon, Jordan and Turkey are currently hosting many, many more.

Thus, the first priority for us is to win the argument that member states can and should agree to take in more refugees and properly organise their distribution among themselves. Of course, not all the 60 million refugees around the globe, but certainly more than it currently takes in. We are not facing a temporary crisis, but a structural change that needs to be managed.

Although it is hard to predict how many people will want to flee to Europe in the foreseeable future, a recent report by the European Council on Foreign Relations (ECFR) estimated that 3.5 million migrants and refugees will need to be hosted inside the EU in the next five years and that approximately the same number of people will need to be taken care of in the countries surrounding the EU (Turkey and North Africa).

In order to cope with these millions of people on the move, the EU and its member states have to resolve themselves to formulating and implementing a better-coordinated, more effective and ambitious common policy, using all the legal and financial instruments that the current EU treaties and regulations offer.

A common policy must entail burden-sharing and member states’ contributions should put together a common asylum fund and humanitarian action task force, and, crucially, a massive resettlement plan.

It will be necessary to strike deals with neighbouring countries. These agreements will have to be acceptable to critical audiences inside the EU who want them to be in line with basic European standards. This presents a challenge because most partner countries are less democratic, less stable and more corrupt than the average EU member state.

The present controversy over the EU-Turkey deal is an example of how the need for quick results can conflict with the wish to adhere to European norms and values. It is a fact that since 20 March, the day the deal went into effect, the number of migrants and refugees arriving on Greek islands from Turkey has fallen dramatically.

At the same time, there are still serious doubts about the reasons why this has happened and about the way Turkey is treating the refugees that have already been sent back, as well as about Turkey’s ability and willingness to apply European standards in dealing with new refugees from Syria and other countries. Besides, it is already apparent that new routes have been found. Italy is starting to see more Syrian refugees arrive on its shores from Libya.

On top of this comes the row over the lifting of visa requirements for Turkish citizens, which is part of the bigger deal. The link between re-admission of irregular migrants by Turkey and visa free travel for Turks had already been agreed upon in 2013, but its implementation has been accelerated as part of the Syrian refugees agreement. Personally, we are of the opinion that visa obligations for Turks should have been lifted long before, as has happened in the past with other candidate states during accession negotiations. But visa liberalisation is now conditional on Turkey complying with 72 criteria.

Most of them have been met by Ankara, but some sensitive ones remain, including the infamous anti-terror legislation that allows the Turkish authorities to label every opponent of the government, such as Kurds, journalists and academics, as terrorists. The EU demands that these laws be revised, but Turkish president Erdogan has made it clear that he has no intention in doing so, and is willing to scupper the whole refugee deal if the EU is unwilling to deliver on its visa promises.

For the moment it seems clear that a final decision will not be taken in June, as originally scheduled, but will be postponed until October. But at a certain point the EU will have to decide what to do: stick to the criteria and run the risk of returning to square one when Turkey pulls out of the agreement, or try to reach a face-saving solution that is acceptable to Ankara but will most probably be heavily criticised by the European Parliament and human rights organisations.

It is the sort of dilemma we fear the EU will be facing more often in the future when Brussels will have to strike similar deals with countries such as Egypt, Libya or Morocco. The necessity of these agreements on the one hand, and the inevitability of serious disagreements over European norms and standards on the other, will force politicians of all political families, including the Greens, out of our comfort zone.

That will be neither easy nor pleasant, but there is no escape. Still, there will be no sustainable deal until the EU accepts the fact that it cannot keep out all those who wish to enter, and that we have a responsibility to share an important part of the burden with our neighbours.