The Brief – Blame it on the teleprompter 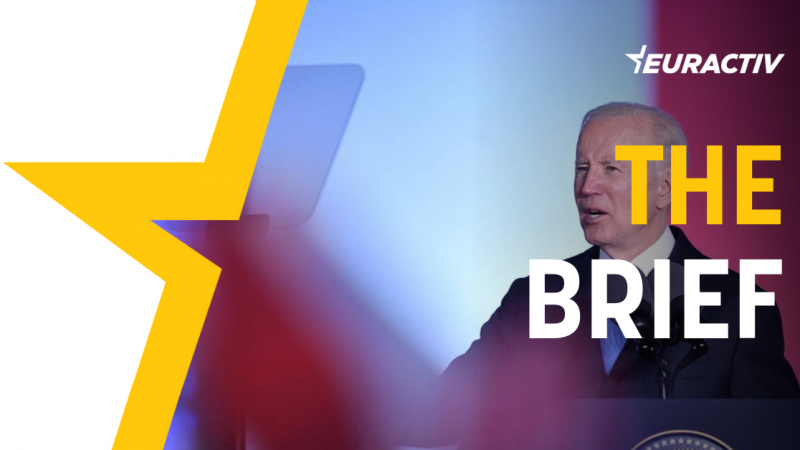 On Saturday, US President Joe Biden referred to his Russian colleague Vladimir Putin in a rather unusual way, saying, “For God’s sake, this man cannot remain in power“.

The detail is important: Biden was in Poland, reading a written speech from a teleprompter. But apparently, he veered off-script to make the unexpected remark.

Or the teleprompter was wrong. We may never know.

In any case, the White House lost no time explaining there was no change of policy and that the US did not seek a regime change in Russia.

Earlier that day, during that somewhat emotional trip near the Ukrainian border, Biden called Putin “a butcher”.

It didn’t look like a pre-planned statement either as he was answering a journalistic question.

Planned or improvised, Biden’s statements mark a negative escalation in the discourse between the two biggest superpowers. As a result, the US and Russia have never been so close to cutting diplomatic relations completely.

A couple of weeks ago, a US Senator went as far as to call for Putin’s elimination. Meanwhile, the White House is going to great lengths to repeat, time and again, that it is not seeking to overthrow Putin.

We can only speculate if sending a commando to terminate Putin might be in the US ‘Tiger Team’ playbook on Ukraine. Personally, I doubt it. It would just be too dangerous for the world.

Similarly, we can only imagine how the Kremlin collects hostile and sometimes reckless statements to quote later and justify its future daredevil actions. They must already have a pretty good collection.

Openly hostile rhetoric from Washington helps Russia substantiate its claim that the fundamental US objective is destroying the Russian Federation. This gives Moscow the excuse to take the measures it wants to take, including the most frightening ones.

French President Emmanuel Macron jumped in on Saturday, calling for restraint. “I wouldn’t use this type of wording because I continue to hold discussions with President Putin,” he said.

Indeed, we may ask ourselves if Biden would ever be able to speak to Putin again. Who knows? Maybe he could.

Last year Biden called Putin a killer, which did not prevent them from meeting in Geneva three months later.

But perhaps a point of no return was crossed in Poland.

While Biden may have excluded himself from future peace negotiations, Macron would undoubtedly be a more helpful interlocutor in the expected peace talks, alongside others, including Turkish President Recep Tayyip Erdoğan.

It’s important to understand that future peace talks will be between Ukraine and Russia, meaning between Zelenskyy and Putin.

But Western guarantors will be needed. Without the presence of foreign leaders such as Erdoğan, Macron, or Boris Johnson around the table, a simple bilateral meeting between Putin and Zelenskyy would be a guaranteed flop.

But in a logic of escalation convenient to Putin, we should not be surprised if he maximises his demands and seeks the erasing of Ukraine’s statehood.

This would mean that we are in for a long-haul war and that it is no longer realistic to assume that Putin wants it finished before the 9 May parade on the Red Square.

A long-haul war will be marked by an escalation of the confrontation and atrocities, including the risk of spillovers and engaging a NATO member, directly or indirectly, willingly or unwillingly, in the conflict.

This would then unfold into a nightmare scenario, compared to which the Caribbean crisis of 1962 would look like a walk in the park.

In an escalation leading to nuclear war, each step is a point of no return.

We can only wish that our side of the civilisation would not cross any such points of no return. We can do so much better than that.

There are no major abnormalities in the European Union’s market for carbon emissions, but tighter controls could improve transparency and monitoring, the EU’s securities watchdog said on Monday.

The European Commission urged member states on Monday (28 March) to explore ways to strip sanctioned Russians and Belarussians of EU nationalities that were acquired in highly controversial “golden passport” schemes.

While participatory democracy sounds like an important goal to many, it also raises questions of responsibility, accountability, power and trust, according to a panel on citizen engagement.