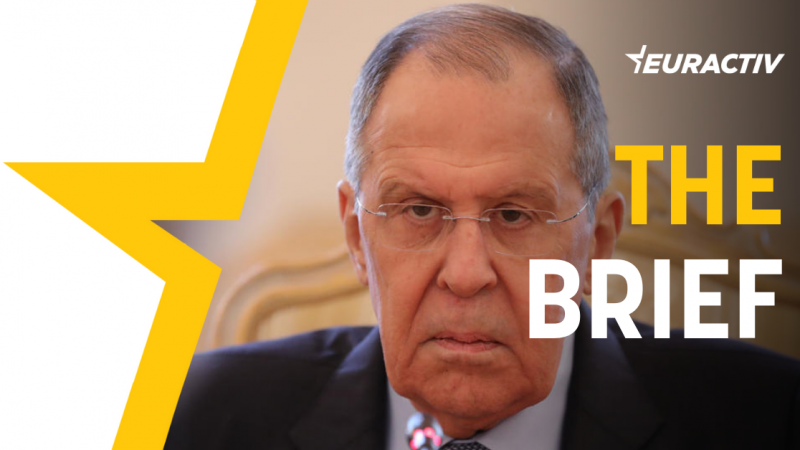 Speaking to a French audience, Russian Foreign Minister Sergei Lavrov tried to justify Russia’s invasion of Ukraine by saying, “what would France do if Belgium banned the French language?”

“For the West, it did not matter at all what happened to the Russian language, to Russian education, to the Russian media, which were banned by law,” the veteran foreign minister said in an interview for the French TV channel TF1.

“For example, how would France react if Belgium banned the French language? Or what would England do if Ireland banned English? In Europe, one cannot imagine that,” Lavrov said. “But when it comes to Russian [in Ukraine], nobody in Europe cares.”

Lavrov’s interview prompted a flurry of comments in French and Belgian media.

Belgium is indeed a country that has linguistic issues, with an administrative language barrier between the Flemish and the Walloon part, with exceptions for some communes with mixed populations, including the capital Brussels.

But French is not banned in Flanders.

And by the way, Russian is not banned in Ukraine either, not even in the Donbas, although Lavrov implied this was the case. This is a false narrative, and it’s a pity the French journalist didn’t react.

A bit of context: An Ukrainian recently interviewed by Western journalists explained that her mother language was Russian, but now she makes an effort to speak Ukrainian because she doesn’t want Putin to come to “liberate” her.

To reframe Russia’s war in Ukraine as something that could also happen in the West, with French tanks rolling into Belgium, is a clear sign that Russian communication has hit a new low.

This is even more striking given that Lavrov is a skilled diplomat – he has been the foreign minister since 2004 – who should have a good understanding of sensibilities in the West.

Or maybe we were wrong to assume that. Perhaps it is now clear that even the most sophisticated Russian diplomats can only think in terms of brute force.

No, Mr Lavrov, France will not wage war on Belgium, even if the Flemish were to ban the French language entirely.

Your assumption is entirely wrong, and war is not a solution for every grievance. You may assume war is the solution, but we don’t. Perhaps there is a civilisational gap between us.

As a journalist, I have had other experiences with Russian narratives that those perpetuating them thought built a strong case in their favour but turned out to be just the opposite.

For example, the Russian ambassador to the EU, Vladimir Chizhov, once told me “how well our countries were getting along in previous times”.

I am old enough to remember these times. The Soviet Union may have been fine with its Yalta conquests, but my country, Bulgaria, wasn’t.

If Russia is nostalgic about Soviet times, we aren’t. We were young, but we realised the many lost opportunities resulting from living in “the socialist camp”.

In his interview, Lavrov also explained the sluggish advance of the Russian military effort by saying the Russian army was trying to avoid civilian deaths at all costs.

Judging by the brutality of the Russian artillery that has erased entire cities off the map, such a statement truly takes the political manipulation of reality to unprecedented levels.

It is increasingly difficult for journalists – and politicians – to speak to Russian interlocutors. And although some disagree, I think we need to continue the effort, fully aware of the difficulties.

Children of Ukraine have a right to education and services

As children fleeing Ukraine are enrolled in schools across Europe, Eurochild members report a lack of facilities and teachers experienced in multi-language education. How can the EU support the children of Ukraine through the European Child Guarantee?

The EU is planning an offensive to counter Russian narratives that repeatedly blame the West for disrupting the global supply chains of grains and fertilizers.

As more EU states were being cut off from Russian gas earlier this week, the Belgian government drew attention to measures already in place to reduce its consumption.

To target child sexual abuse online, the German Interior Minister has spoken out in favour of securing the IP addresses of computers, for which the governing coalition wants to use the quick freeze method.

Germany’s agriculture ministry has found a compromise with the European Commission over the implementation of the EU’s Nitrate Directive, likely avoiding multi-million euro fines.

Meanwhile, each political group of the European Parliament submitted a few hundred amendments to the upcoming AI Act, a prelude to complex negotiations that are set to start before the summer.

In other news, the revision of the pharmaceutical strategy should include action to ensure equality in access to medicines, says the European Consumer Organisation, so there’s no need to rely on voluntary industry initiatives.

Last but not least, check out our latest Economy Brief for a weekly roundup of news.