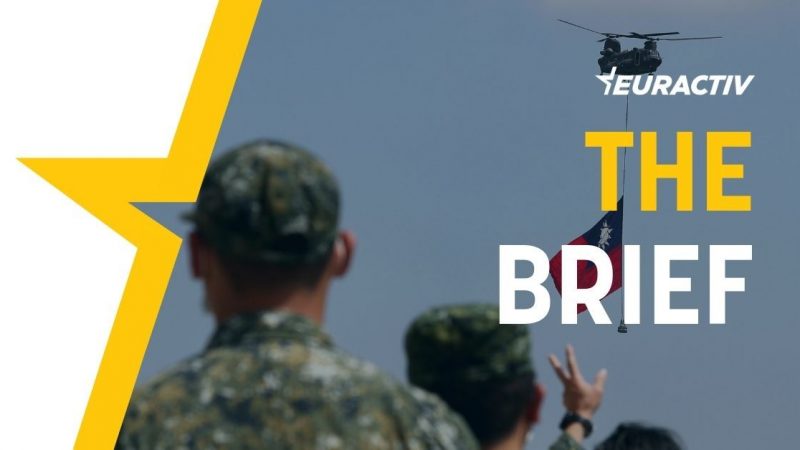 The EU is walking a tightrope when it comes to Taiwan, the island described by pundits as the most dangerous place on Earth right now.

Europe should not be sending wrong signals to separatist forces in Taiwan. It risks harming its ties with China, the Chinese foreign ministry said on Thursday (4 November) after a European Parliament delegation met Taiwanese President Tsai Ing-Wen.

“The European side should correct its mistake,” China stated.

This is not the first complaint from Beijing. On 21 October, the China Mission to the EU slammed the adoption by the European Parliament of a ‘Recommendation’ on EU-Taiwan political relations and cooperation.

MEPs urged the EU to do more to address these tensions, to protect Taiwan’s democracy and the island’s status as an important EU partner.

Finally, MEPs proposed changing the name of the European Economic and Trade Office in Taiwan to ‘European Union Office in Taiwan’ to reflect the broad scope of EU-Taiwanese ties. And that crossed one of China’s well-known red lines.

For Beijing, there is only one China, of which Taiwan is an inseparable part, and this is the foundation of diplomatic relations between China and the EU and its member states. Consequently, Beijing called on the EU to “correct its mistakes, remove disturbances, and create conditions for the sound and steady development of China-EU relations”.

The geopolitical context is important here.

China has abandoned its ‘One China – two systems’ concerning Hong Kong. It pays no heed to criticism on human rights from abroad. And China’s President Xi Jinping sees it as his priority to achieve the “reunification” with Taiwan, for which, by the way, there is no desire whatsoever in Taipei.

The escalation of Sino-US hard talk has led President Joe Biden to say that the US would come to Taiwan’s defence and protect the island in the event of a Chinese attack.

The military escalation by China and the US in the Taiwan Strait clearly shows that the risk of full-fledged war over the South China Sea has never been greater. It has also emerged that US military personnel have secretly been operating in Taiwan for at least a year (Incidentally, Tom Clancy used such a hypothesis in one of his ‘Jack Ryan’ novels).

In the meantime, some EU countries, especially in the East (Lithuania, Czechia, Slovakia, to name but a few), seem to be responsive to what looks like a charm offensive by Taiwan, to the extent of re-directing their relationship from China to Taiwan. Lithuania has quit China’s 17+1 cooperation forum, calling it “divisive”.

In a worst-case scenario, the US would be dragged into a war over Taiwan simply because it cannot afford not to. A full dominance of China in an area spanning from Japan and South Korea to Australia would turn the world as we know it upside down. It would downgrade the US to the status of local power and shatter all its alliances, including NATO.

AUKUS, the trilateral security pact between the US, the UK, and Australia, was conceived in the worst possible way, by antagonising France, the only EU country which matters in terms of military capability in distant seas.

Europe could not stay away from a conflict endangering the lives of some 15,000 Europeans residing in Taiwan. France has three archipelagos in the Pacific it would certainly not abandon.

The EU simply cannot afford to pretend it doesn’t see the Taiwan-China tensions. Individual countries should not complicate the stand-off even further.

Instead, the EU should have a unified position (and we know how difficult that often is). This position should be de-escalation. But it should also be clear about what happens in the worst-case scenario. That part we have yet to hear.

Poland was expected to use the COP26 summit to announce its climate neutrality goals as the last country in the EU to do so. But Prime Minister Mateusz Morawiecki’s speech, which focussed on problems rather than solutions, was a letdown, experts told EURACTIV.

A coalition of the world’s major economies, financial institutions and organisations have come together to accelerate efforts to phase-out coal generating capacity and financing for new fossil fuel projects at COP26.

The European Commission’s plan to guide and support the EU textile industry in emerging from the COVID-19 crisis might fall short when it comes to the traceability of textile raw materials.

German members of the European Parliament have been ranked as the third most influential, behind France and Spain, according to the 2021 VoteWatch Index of Influence published on 1 November. Will the next German government be able to change that?

The Commission and the US administration have announced the creation of a new transatlantic collaboration platform on agriculture in a bid to boost knowledge exchange and cooperation, but tensions remain over the wider implications of the EU’s push on sustainability.

Europe has a waste problem. In 2018, over two million tonnes of rubbish was treated in the EU, with just under half of this going to landfills, where it releases climate-damaging methane emissions.

Views are the authors.