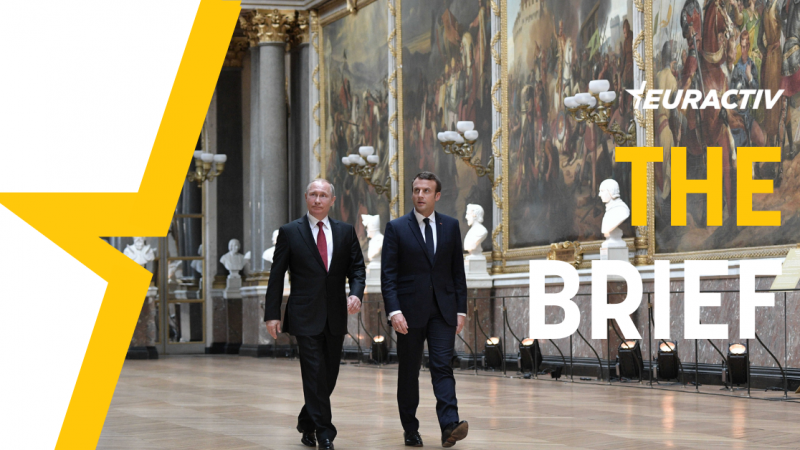 French President Emmanuel Macron gave an unusually long interview to French media over the weekend with an intriguing part about Russia sandwiched between the usual stuff about domestic politics.

Speaking to TF1-LCI, Macron said that France’s outrage over the failed submarine deal with Australia would not lead to France leaving NATO and joining an alliance with Russia.

He also called for a more robust European defence policy while noting that for historical reasons, “France loves Russia” and “Russia loves France”. The French president continued that the countries should come together sooner or later on world affairs, from Lisbon to Vladivostok, to prevent Russia from forging an alliance with China.

Macron recognised that under President Vladimir Putin, Russia has been conducting a revanchist policy versus the West in response to the humiliation Russia suffered with the collapse of the Soviet Union. But in this context, Macron did not mention Ukraine a single time.

Macron recognises that Putin is becoming more and more authoritarian. Still, he remembered with some warmth a trip with Putin to the Gallery of Battles in Versailles in 2017 (which, of course, only depicts French military victories, certainly no defeats).

As France takes over the EU’s rotating presidency, it is worth noting that Macron’s vision of Russia is by no means a mainstream EU position, if there even is such a thing.

Following in the footsteps of Charles de Gaule, Macron sounds like the General’s heir to his domestic audience. But in many EU countries, Macron’s Russian overtures sound bizarre to say the least.

For some reason, the complete version of his interview was later cut down (minus the Russia comments) on the websites of TF1, who conducted the interview and LCI, who initially aired it in full.

Macron’s warmth toward Russia is even more challenging to grasp at a time when Moscow is inflicting significant humiliation on him in Mali. Russian Wagner Group mercenaries, reportedly owned by a man close to Putin, now sanctioned by the EU, could effectively oust French and other European troops from the country.

Moreover, Macron cancelled a planned Christmas visit to the French troops – and a meeting with Assimi Goita, the transitional leader of Mali.

As for Ukraine, Macron’s latest statements at the Eastern Partnership summit put the onus on Kyiv to deliver on the Minsk peace agreement (so far, Moscow and Kyiv have found plenty of excuses not to implement it).

But Ukraine doesn’t want to do its part, which amounts to conducting elections in Donbas and accepting their result, probably giving Russia an official gateway into Ukrainian administration and internal affairs.

When a country takes over the EU presidency it is supposed to put its own politics on the backburner. Our educated guess is that these unwritten rules will not apply in the next six months.

While activists battle to ensure taxonomy paves the way for real climate action, EU political leaders want to rebrand fossil gas and nuclear power as “sustainable” when they are neither sustainable nor green, argues Greta Thunberg and a group of youth climate activists.

Serbian President Aleksandar Vučić has halted a controversial lithium mining project with British-Australian company Rio Tinto, following national protests throughout the country during November and December. But protesters vowed on Saturday (18 December) to continue the fight.

To double the renovation rate of buildings, the European Commission has requested EU member states to provide technical assistance to homeowners by setting up one-stop shops that will guide consumers throughout the renovation process. The building stock is responsible for 36% of the bloc’s emissions, and improving the energy efficiency of buildings has long been on the EU agenda.

EU members will get an additional 20 million doses of the Pfizer-BioNTech vaccine in the first three months of 2022 to fight the fast-spreading Omicron variant; the European Commission said on Sunday (19 December). The announcement comes as Europe braces for a new COVID-19 wave, driven by the highly mutated and transmissible Omicron variant and fanned by socialising over the Christmas holidays.

Thousands of people protested outside the Polish president’s palace on Sunday (19 December) against a new media law that critics say will silence the country’s leading independent news channel.

Germany would not rule out transferring its military mission in Mali to another country if the danger is too great, Defence Minister Christine Lambrecht said Sunday (19 December). “The safety of our soldiers is my priority,” Lambrecht told German weekly Bild am Sonntag, referring to the Bundeswehr’s mission to train Malian forces.

This was the conclusion at a recent roundtable, ‘Heads Together: Elevating Unmet Needs In Migraine’, organised by Women’s Brain Project (www.womensbrainproject.com) and Lilly, to discuss the long-reaching impact of migraine and the need for a more urgent approach to how the condition is managed.

One response to “The Brief – Macron’s world”