The Brief — NATO should thank Putin 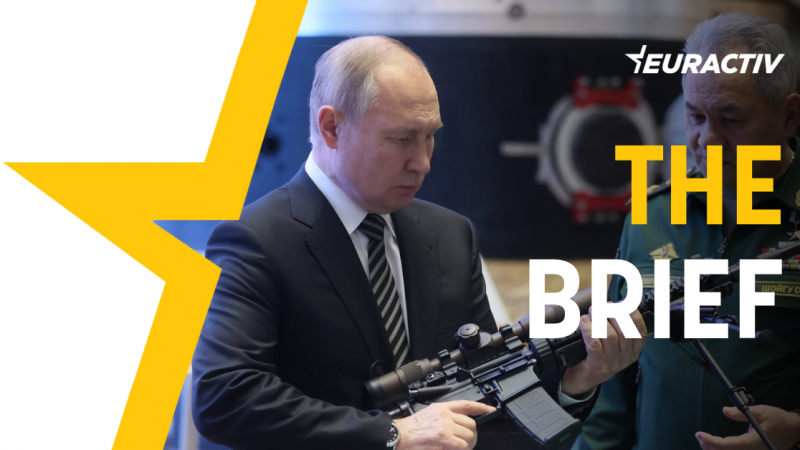 Kremlinology is a science developed during the Cold War when the West tried to second-guess what the Soviet Union was up to. Years have passed, and despite the new technologies, the Kremlin is just as opaque and hard to read as it ever was.

The bottom line is that by pumping up the pressure at the Ukraine border, we do not know what the intentions of Russian President Vladimir Putin are, what he is hoping to gain, and what he will accept losing.

One certain thing is that these tensions are making NATO stronger than ever. That is a price Putin is already paying, without obtaining any gain.

The alliance is committed to the peaceful resolution of conflicts but if diplomatic efforts fail, it also has military power and the capacity to react under the collective defence clause in its treaty.

Denmark is sending a frigate to the Baltic Sea and is set to deploy four F-16 fighter jets to Lithuania to support NATO’s long-standing air-policing mission in the region. Spain is sending ships to join NATO naval forces and is considering sending fighter jets to Bulgaria. France has expressed its readiness to send troops to Romania under NATO command.

The Netherlands is sending two F-35 fighter aircraft to Bulgaria from April and is putting ship and land-based units on standby for NATO’s Response Force. The US has also made clear that it is considering increasing military presence in the eastern part of the Alliance.

Sweden and Finland, two countries with a post-WW2 tradition of neutrality, no longer consider NATO membership taboo (with some important caveats).

Both have forged stronger ties with the organisation in recent years and chosen military equipment compatible with NATO members. Helsinki and Stockholm also signed an agreement to train together and allow NATO assistance in crisis situations.

Unlike candidates from Eastern Europe such as Ukraine and Georgia, Sweden and Finland could join NATO as soon as they apply. Although applications are not on the cards in the near future, Helsinki and Stockholm have rejected Russia’s calls against further NATO expansion.

The booster for NATO’s popularity was, of course, Putin’s gamble with Ukraine.

The Russian strongman may order “a minor incursion”, as US President Joe Biden said, obviously revealing what the US Kremlinologists told him.

But the result will nevertheless be a serious strengthening of the defence potential of NATO’s eastern flank allies, a reduction of the dependence on energy imports from Russia, and probably the end of defence industry cooperation with Russia (thus far, several countries from Eastern Europe still use Russian armaments and technology).

A ‘major incursion’ in Ukraine does not mean that NATO will fight with Russia, but it will mean sanctions. Much preparatory work has been done, and the EU and the NATO countries will not be divided over the sanctions, as Putin possibly hopes.

NATO’s sudden revival challenges the EU’s ambition to forge a credible defence policy for itself. Clearly, this development shows that the EU needs to focus on complementarity rather than the substitution of NATO. The EU could also thank Putin for the hint.

Eight EU countries known as “the alliance of responsibility” who spoke out in favour of an early return to strict debt rules in a position paper in September 2021 are being pushed towards compromise with even Germany adopting a more conciliatory tone. EURACTIV Germany reports.

The group of experts advising the European Commission on green finance have criticised plans by Brussels to label gas and nuclear power as a “transitional” source of energy under the EU’s sustainable finance taxonomy.

Finally, check out our latest ‘Over a Coffee’ with Frank Terhorst, Head of Crop Strategy and Portfolio Management at Bayer Crop Science, and Bernd Olligs, part of a multi-generation farming family from Damianshof Farm in Germany, to get their thoughts on the future of sustainable farming.