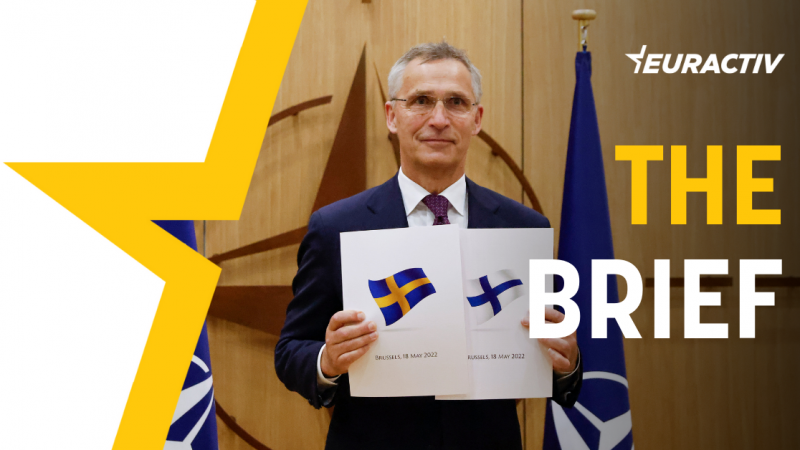 Almost 80 years after the end of World War Two, Europe’s club of ‘neutral’ or non-aligned countries appears certain to shrink due to Russia’s war in Ukraine.

Finland and Sweden formally applied to join NATO, handing over paperwork at the alliance headquarters on Wednesday (18 May) and setting in motion an accession process expected to take only a few weeks.

While some diplomats say the formal ratification of all 30 allied parliaments could take up to 12 months, this would still be a fast-track approach, considering that the process can often take several years.

With the Nordic duo en route to NATO, Austria’s neutrality is the next to come into the spotlight.

Chancellor Karl Nehammer has so far trodden a fine line between saying the country has no plans to change its status while also declaring that military neutrality doesn’t necessarily mean moral neutrality.

For Ireland, which has been participating in EU battlegroups and sending non-lethal aid to Ukraine, Prime Minister Micheal Martin said earlier this year that the country “is not politically neutral, but we’re militarily neutral.”

Malta’s constitution says the island state has a policy of “non-alignment and refusing to participate in any military alliance,” with polls showing that most respondents support neutrality. Its speaker of the parliament, however, recently came under fire for calling the Ukraine war a “conflict” and was quickly corrected by his Ukrainian counterpart.

For Cyprus, any idea of NATO membership remains off the table but relations with the US have intensified over the past decade. Nicosia has, however, been interpreting neutrality very loosely, especially after it allowed Russian warships to resupply at Cypriot ports before the invasion.

Despite different notions of neutrality, what unites all of the countries above is that they have the option of being protected by Article 42 (7) of the EU Treaty: Europe will protect them if they ask for it.

“Article 42 (7) is there. It clearly says that if a member state of the EU is attacked, if there is an armed attack on its territory, it can ask others to help it. And the others must help them by all means,” the EU’s chief diplomat Josep Borrell told reporters.

It is up to the attacked state to make “the request”. The triggering of the clause is not automatic but once the request has been made, the other member states are “obligated to provide it with assistance,” he said.

“It is not optional. It is not possible to say, ‘I have other things to do.’ It is an obligation of the Treaty,” Borrell stressed.

Meanwhile, the status of Switzerland, the country most readily identified with the very concept of neutrality, is about to face its biggest test in decades, with the defence ministry tilting closer to Western military powers in response to Russia’s invasion of Ukraine.

For Ukraine, the country at the heart of this reshuffle, the idea of neutrality floated occasionally in recent weeks means something different from how Russia would see it.

And the longer the Russian invasion continues, the more it is becoming an unviable option, too.

The European Commission submitted on Wednesday a €300 billion plan to eliminate Russian energy imports by 2027, although it admitted this would require short-term investments in new fossil fuel infrastructure to replace imports of Russian oil and gas.

The European Commission should temporarily block its staff from taking private sector jobs if they pose conflict of interest risks that cannot be offset by restrictions, the European Ombudsman Emily O’Reilly recommended on Wednesday.

Giving those harmed by multinational companies a way to seek recourse, reparation, and justice is one of the goals of the corporate sustainability due diligence directive, but in practice, it may be easier said than done.

Microsoft will adapt its licensing conditions in response to complaints from cloud providers and the rumblings of a competition investigation from the European Commission.

Last but not least, don’t forget to check out our latest Green Brief and the Health Brief.