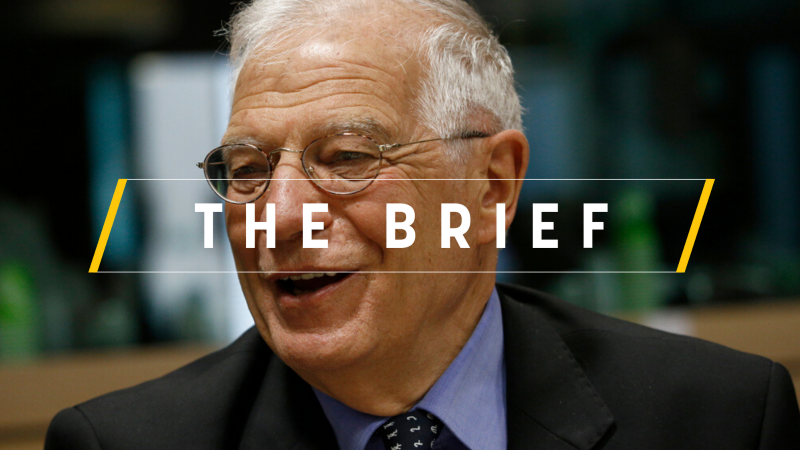 On Monday (6 July), EU foreign affairs chief Josep Borrell met Turkey’s foreign minister Mevlut Çavuşoğlu, who publicly threatened the EU with retaliation if further sanctions are imposed on Ankara. The threat was met with a diplomatic appeal for dialogue, which – it is increasingly clear now – sometimes just doesn’t cut it.

“We’ll have to respond if the EU makes additional decisions against Turkey and this will create a bigger tension,” Çavuşoğlu said.

Borell’s reply, which he tweeted later, was: “The current situation is far from being ideal. We need dialogue to avoid further tensions”.

The Spanish diplomat received it and was all smiles, while just moments before, Çavuşoğlu said to his face that Turkey does not recognise an EU member state, Cyprus.

Borrell either doesn’t understand his situation or he does but is under pressure.

If he is under pressure to be gentle it may be because Germany keeps selling submarines to Ankara while Spain provides Turkey with the know-how for the construction of war aircraft, but then he should say so. Wheeling and dealing has never led to great results.

To be completely fair, Borrell’s mandate is not as powerful as it may seem. It is vaguely defined and is often crippled by the myriad national interests, often conflicting, and the need to reach consensus on every decision. All of which goes to say that there is no such thing as the EU’s common foreign and security policy.

But when neo-Ottoman ambitions, which view the Mediterranean as its own backyard, become so apparent, a top EU diplomat should never smile.

Turkey clearly and openly questions the Exclusive Economic Zone of Greece and Cyprus and has announced drilling – illegal, according to the EU – in Greek and Cypriot waters, essentially in EU territory.

Whether the EU will again see thousands of migrants trying to reach Western Europe, as was the case in 2015, depends almost entirely on the will and whim of Turkey’s ruler, Erdogan.

It’s becoming increasingly clear that the EU is bowing to Erdogan’s pressure and this may lead to unpredictable outcomes, just as Europe is preparing to turn its economy around and reposition itself globally.

EURACTIV has been informed that frustration over Borrell’s handling of both China and Turkey is increasing, especially within the European People’s Party (EPP). It is hardly likely that this might yield any concrete result – the EU prefers dialogue and small steps – so let’s hope that geopolitical waters remain calm.

Italy, Spain and France will register the worst economic downturn among eurozone countries this year as the contraction will be more severe than previously expected, according to the latest European Commission forecast.

Germany has spent more than $1 billion over the past decade to cover the costs related to the stationing of US troops on its territory, according to figures by the German finance ministry, which a key government official called “anything but too high”, citing related economic benefits.

EU countries should only get money from the bloc’s budget and the COVID-19 recovery fund if they have robust courts and safeguards against corruption, a top official said, a couched warning to Poland and Hungary, among others.

The governments of the Netherlands, France, Belgium and the UK signed an updated version of the Eurostar treaty, which will streamline border checks and shave a full hour off the Amsterdam-London journey time.

A “well-regulated” platform economy should allow for small and medium-sized enterprises to compete fairly and should not lead to the formation of “international monopolies”, German Economy Minister Peter Altmaier said.

Following a paper in which a group of German Green MPs and one MEP unexpectedly backed the use of gene-editing technologies, EURACTIV spoke to MEP Martin Häusling, agriculture spokesman for the Greens/EFA in the European Parliament.

One response to “The Brief, powered by BSEF – Turkey threatens, Borrell smiles”