The Brief, powered by EHFG — Macron has wind in his sails 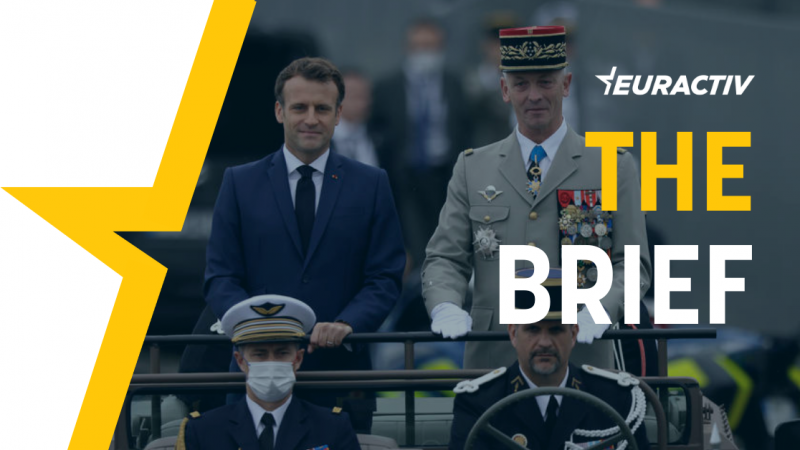 The EU has had a glorious period of big projects — the single market, enlargement, the euro. Reform in this period, including treaty change, was driven by the sheer scope of these huge projects.

Now, however, the Union no longer has big projects, only big challenges. But we will argue here that the challenges and setbacks are also a driver for reform, not by vision or choice but by necessity. In other words, the EU will be learning and doing things the hard way.

The election of Donald Trump shocked Europeans and they started talking about “strategic autonomy”. Then Trump lost the elections and Joe Biden, an old-school Democrat, took over, much to their relief.

At first, Biden did exactly what the Europeans wanted: He came to Europe and promised that the US would be a predictable partner.

But in the last few days, the newly found faith was broken. First, the US withdrew from Afghanistan without any consideration for its Western allies. Then came the submarine affair, when Washington stabbed France in the back, hurting and humiliating the EU’s mightiest military power, its only Security Council member and nuclear power.

And in the post-Brexit world, the US teamed up with the UK, adding insult to injury.

Geopolitically, the gap also seems to be widening. The US has a vision of the world that doesn’t necessarily coincide with the views of Paris or Berlin. There is no worst-case scenario where Europe would go to war with China, which is seeking to establish its buffers in the South China Sea.

And Europe now feels less secure in case worst-case scenarios come to pass on its own continent – even the US would hesitate to engage in two theatres at the same time.

The arguments that the Union needs its own defence are clear. Reform is not a choice, it’s a necessity.

The French presidency of the Union in the first half of 2022 – coinciding with presidential elections that Emmanuel Macron is determined to win – is an important juncture for advancing in this field.  It will not be easy – the countries from Eastern Europe are likely to support the status quo, although the status quo may become unsustainable.

The countries from Eastern Europe generally don’t trust Macron on Russia. If he wants them on board, he should offer a different narrative from the one he once used – and then abandoned.

A big European project will certainly give a boost to Macron on the French political scene. But that’s good, his personal motivation may be of huge utility for the Union.

But in the short term, the EU needs to mend its ties with the US. Without a minimum of understanding, the whole West will be the loser.

There again, Macron is the key player. He has the wind in his sails.

Catching up from last week: EU lawmakers have asked the Commission to develop an action plan which includes “objectives, reduction targets and timelines” for the phase-out of animal testing. The parliamentary resolution is non-binding, but was adopted in a vote of 667 to four.

And in a joint initiative, the EU and US are calling on other countries to commit to the reduction of methane emissions. The pledge includes cutting global warming by at least 0.2 degrees Celsius by 2050.

Presidents Macron and Biden are expected to meet within the next few days, after Australia announced last week that it would leave the French submarine plan and struck an alternative deal with the US and Britain. Australian executives say they were “upfront, open and honest” with France about their concerns, but French leaders are still seeking clarification.

Time is running out ahead of the German general election, and forsa, one of the nation’s largest pollsters, has been locked in a legal polling battle since August. The fight began when Germany’s federal election commissioner called out an unnamed institute for failing to uphold the secrecy of the ballot.

Still in Germany: Farmers and environmentalists are calling on Germany to improve the implementation of the green architecture in the Common Agricultural Policy. But between German elections and looming deadlines, it is unclear whether this can be done on time

And in Russia: the ruling United Russia party, which supports President Vladimir Putin, has once again retained its parliamentary majority, according to partial results. But with a one-tenth decrease in support, for how much longer will the party remain in power?

Plus, ahead of Bulgaria’s new parliamentary election, former interim economy and finance ministers have created a new “centrist” faction, pledging to tackle widespread corruption and the distribution of wealth.