The Brief, powered by ELF — Global gateway needs to be paved with gold 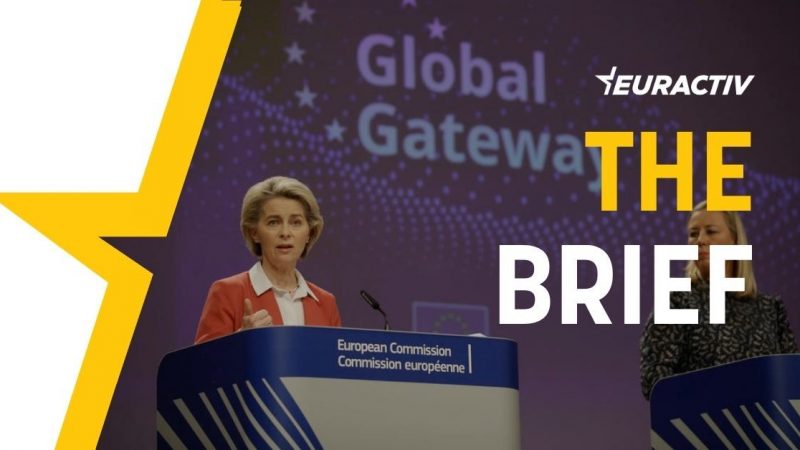 A ‘geopolitical’ Commission was one of Ursula von der Leyen’s promises when she took charge of the EU executive just over two years ago. So far, its record has been mixed: from Afghanistan to Aukus, it is hard to make the case that the EU’s diplomatic muscle is any stronger than before.

In Africa, where the EU has always thought of itself a main partner, a raft of Beijing–funded public works and transport projects have given China much greater political and economic influence over the past decade.

That is not to mention the vast sums of money China has pumped into Central Asia and Eastern Europe as part of its Belt and Road programme.

In the process, the EU has been shunted further down the pecking order, and now Japan, Turkey, the UK, and India want to increase their own share of the market.

The EU may be a bit late to the game, but, as of this week, it does at least have its own investment plan. Known as the Global Gateway, it is armed with a €300 billion war chest to finance infrastructure, digital, and climate projects which will “strengthen Europe’s supply chains, boost EU trade and help fight climate change”.

These are a sensible set of priorities. Digital, climate change and environment-related projects, and funding for medical and health projects in developing countries, tie in the EU’s long term political goals.

The trouble is that while €300 billion sounds like a lot of money, we can’t take this figure at face value. ‘Team Europe’, meaning the EU institutions and member states will “mobilise up to €300 billion of investments”, says the Commission.

A closer look at the detail reveals that €18 billion will come from the EU budget, an average of less than €3 billion per year.

The rest, the Commission hopes, will be stumped up by member states and the private sector. Compared to the $1.3 trillion which Morgan Stanley reckons China will have invested in Belt and Road projects by 2027, the Global Gateway looks like small potatoes.

Instead, the programme will “connect institutions and investment, banks and the business community,” said von der Leyen.

In other words, the Commission is hoping that the European Investment Bank and development finance institutions will generate the bulk of the lending based on a small amount of seed capital.

That is the approach of the last decade. If the EU really wants to rival Beijing on overseas investment, it will need to show more ambition and flash more cash.

A message from ELF: The European Liberal Forum develops comprehensive liberal solutions to real-life problems
The ELF is acting as an incubator for European policy debates. Together with our 47 member organizations, world-leading liberal foundations and think tanks, we explore policy solutions for a freer and fairer Europe. Discover our publications >>

The Greek socialist party (Movement of Change – Pasok) holds primaries on 5 December to elect its next leader. The outcome of the vote could well determine whether the next coalition government in Greece will lean to the left or the right.

Listen to EU policymakers and you will come away convinced that the electric vehicle revolution is firmly underway.

Small and medium enterprises (SME) have been closely following progress on the upcoming European digital regulations, as EU policymakers are trying to find the right balance between protecting consumers, supporting innovation, and ensuring a level playing field.

The three parties of Germany’s next government have made it clear they want to make the coming years a decade of investments for the future. However, where the resources for such investments will come from remains unclear. EURACTIV Germany reports.

China has banned Lithuanian products from entering the Chinese market amid growing tensions, according to Lithuanian media on Thursday (2 December). The European Commission said it is gathering information and will return to the matter later.

It’s not all about Brexit on the other side of the Channel as England is bracing to face up to another harsh challenge in the coming months: building an entire plasma supply chain from scratch.

French President Emmanuel Macron said he favours “nuclear power being integrated into the taxonomy” on green finance in an address before the European Committee of the Regions on Wednesday.