The Brief, powered by GIGAEurope – Realpolitik 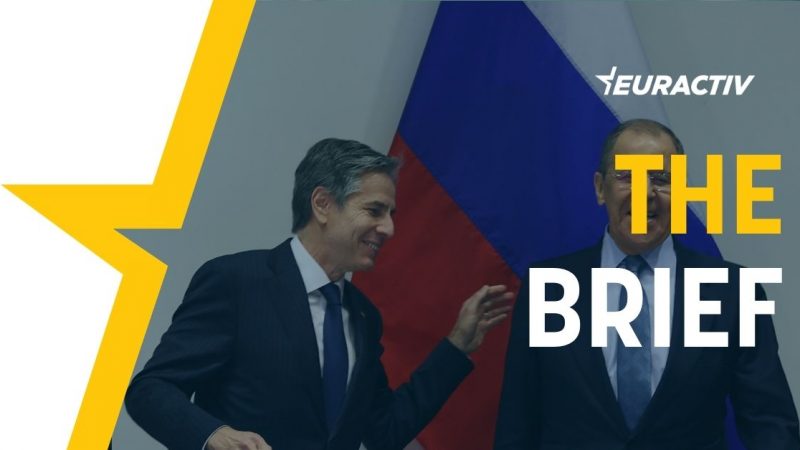 The Gazprom-favoured pipeline Nord Stream 2 has been a major irritant in world affairs for a couple of years now. All of a sudden however it stopped being an issue, during the US-Russia meeting in Reykjavik.

In the EU, several countries, to name just Poland and the three Baltic states, Estonia, Latvia and Lithuania, are deeply disappointed. They will frown at the body language of Antony Blinken and Sergei Lavrov, who suddenly look like pals in photos.

The US has let them down, they don’t know why, and there had been no advanced warning.  For several of the US’s NATO allies, this development is humiliating. For Ukraine, it’s another very bad moment.

Why did the Biden administration make this controversial move? Possibly because it had to choose between two evils. The first evil is to stick to the sanction policy, at the price of antagonizing Germany and other EU countries which have stakes in the project. Moreover, the Nord Stream 2 pipeline is 95% ready, with only some 80 kilometres of piping still remaining.

The second evil is to look meek vis-à-vis Russia, at a time when the Kremlin is more assertive towards the West than it has been since the Cold War. Then you call it Realpolitik, meaning you accept setbacks and move on because it is the best option right now.

It’s important to note that the US decided to put its relations with Germany above all other considerations. Certainly there is a price tag, and we can deduce that Berlin aligning with the tough US policy versus China is part of the deal.

It’s also significant that this US administration made a gesture to Germany and core EU members, because the experience of the Iraq war, when George W. Bush chose New Europe against the Old Europe should not be repeated.

But the biggest gesture is of course to Russia, as it sets a less confrontational environment ahead of a Biden-Putin summit, somewhere in Europe. Whether Russia will reciprocate with some degree of military de-escalation or hold its spooks and covert actions is a long shot.

In Reykjavik, Blinken warned Lavrov that the US would respond to provocations from the Kremlin but that Washington seeks a “predictable” relationship with Moscow. He also said that “if Russia acts aggressively against us, our partners, our allies, we’ll respond”.

Lavrov answered that Russia would like an “honest” relationship, “with the facts on the table, and of course on the basis of mutual respect”.

A better US-Russia relationship is in the best interest of the EU. We are not there yet. And if this is Realpolitik, détente is still far, far away.

Health stakeholders, including a former top European Commission health official, are calling for the EU to play a more active role on health issues to ensure that action taken during the pandemic continues to be built upon in the future.

Europe’s vision of the future of food systems needs to focus on young generations, who will be putting into practice the Farm to Fork strategy (F2F), according to Riccardo Valentini, a prominent agricultural expert, who warned that “everything in this transition that is done without young people is a waste of money”

This week EURACTIV’S yellow room podcast focuses on the violent Israeli-Palestinian clashes, the EU’s role in the peace-making process and the political obstacles and differences among the bloc’s members.

Defence is one of the most important policy areas for governments around the world, but related decision-making is rarely as transparent and fair as it should be and lawmakers must shine a light on lobbying by the arms industry, argues Charlie Linney.

In the next few weeks, EU lawmakers have a chance to show their strong support for nature and sustainable agriculture, argue Sabien Leemans and Jabier Ruiz. But will they?

To produce low-carbon hydrogen on a global scale, 400 1GW nuclear reactors would be needed, according to a report published by the French parliamentary office for the evaluation of scientific and technological choices (OPECST). EURACTIV France reports.

One response to “The Brief, powered by GIGAEurope – Realpolitik”