The Brief, powered by Goldman Sachs — Dancing around the Olympic flag pole 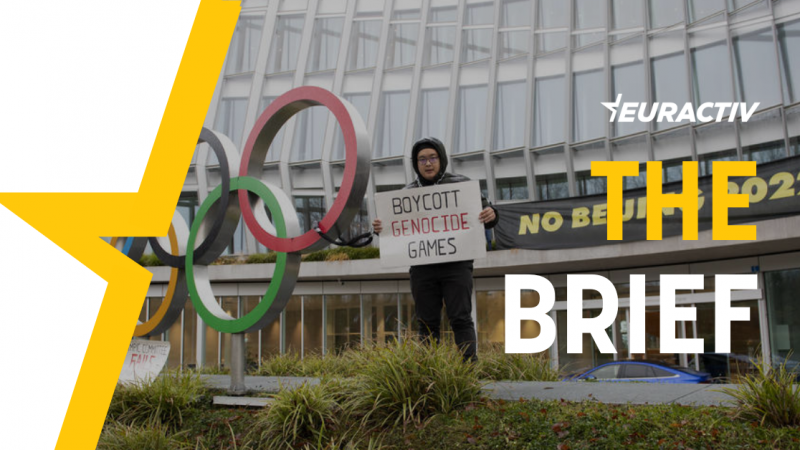 Europe is split over its political representation at the upcoming Beijing Olympics – and its dilly-dallying has already awarded China its first victory.

The Olympic ideal is as captivating as it can be conflict-prone: Rival or even hostile countries get to compete in an arena away from major politics. The controversy starts with the question of in what cases is it is acceptable to refuse to attend or compete?

There is a long tradition of threats and actual political boycotts at the Olympic Games – most prominently in the 1960s and 70s over then-apartheid states and in 1980 and 1984, over Russia’s occupation of Afghanistan.

Olympic Games make for powerful and emotional images. The opening ceremony is an extraordinary display of history and culture where presidents and prime ministers sit in the stands and watch the head of the host state open the games and release white doves, symbols of peace.

Undoubtedly, China will use those symbols very deliberately to strengthen its own image, which has deteriorated in recent years and put Bejing at the very centre of Western political and economic concerns.

Would the diplomatic boycott of the Beijing Olympics in February make a difference?

Should European and Western politicians stay away because of ongoing human rights violations in the host country and the latest case of Chinese tennis player Peng Shuai?

The United States has announced a diplomatic boycott, citing human rights abuses. Australia, Canada, and the UK followed suit and calls for other countries to join grow louder.

A diplomatic boycott only becomes effective if a considerable number of governments take part. But with a geopolitical and economic heavyweight like China, one will think twice before joining.

Senior International Olympic Committee member Dick Pound told Deutschlandfunk on Monday there was “nothing wrong with China” from a sporting perspective.

The decision to choose Beijing was not made “as an indication that we support the political objectives of that country,” Pound said, adding that China’s Olympic Organising Committee would allow athletes to speak their minds at press conferences.

Frustration among human rights organisations has been building up for years. According to a recent report by Amnesty International, the human rights situation in China has not improved since the 2008 Summer Games. The ‘opening’ of the country promised then has not taken place either, according to many observers.

At the same time, more than a million Uyghurs are interned in so-called re-education camps in the Chinese province of Xinjiang. There have been reports of forced sterilisation and abortion, forced organ harvesting, and torture, which Beijing denies. Human Rights Watch and some Western governments are speaking of ‘genocide’.

On Monday, EU foreign ministers were expected to find common ground on whether to join the US-led diplomatic boycott of the Olympics.

Although the EU has taken “no decision” on whether to send any of its representatives to Beijing, “a common European approach would be highly, highly recommended”, a senior EU official told reporters last week, predicting the talks could likely get messy given the differing views among member states.

In the end, however, after lots of noise from EU capitals, the can has been kicked down the road. No common EU decision on a diplomatic boycott is likely this week, and the discussion is likely to resurface in mid-January in its fullest.

Germany and France have refrained from pulling officials out of the event so far. For French President Emmanuel Macron, not sending an official delegation to the Olympic Games is “just symbolism”.

Several EU foreign ministers have suggested that it’s better for European politicians to speak out on human rights issues while being on the ground in China.

Plus, a diplomatic boycott is only the “lighter option”, before countries decide to prevent their own athletes from competing in the Olympics.

Either way, the effectiveness of diplomatic or full-scale boycotts of the Olympic Games is a matter of some debate.

But with the current toing and froing among member states, the main message a diplomatic boycott is supposed to achieve – a united, clear rebuke – has already been compromised.

The EU’s idea of jointly borrowing for joint goals, such as for the post-pandemic recovery, could be used again if the implementation of the recovery scheme is a success, the bloc’s Economic Commissioner Paolo Gentiloni said on Monday. The pressure is now on large recipients of EU money to use the recovery funds effectively.

EU lawmakers reached an agreement on the EU rulebook for digital content and services, formalised by the adoption in the leading parliamentary committee. The compromised text on the Digital Services Act received broad support in the internal market committee (IMCO) on Tuesday, following an agreement brokered by the lead negotiator Christel Schaldemose.

Digital regulation and tech sovereignty will be among France’s digital priorities when it takes over the rotating EU Council presidency in the first half of 2022. “The faster we move, the less the US giants will be able to lobby,” said French centrist MEP and digital specialist Philippe Latombe.

France will also back the European Commission in fighting deforestation and defending a “high” level of ambition when it takes on the French EU Council Presidency in January for six months, said French Agriculture Minister Julien Denormandie. EURACTIV France reports.

COVID-19 certification led to increased vaccination uptake 20 days before and 40 days after it was introduced in countries with lower-than-average vaccination coverage, according to a modeling study published in The Lancet Public Health journal.

In other news, the new Bulgarian government will propose a “very fast” new process that should help Sofia lift its veto and unlock the start of neighbouring North Macedonia’s EU accession negotiations, Bulgaria’s new prime minister, Kiril Petkov, has told the Financial Times. The announcement was welcomed by Skopje.

Meanwhile, the EU’s top court Tuesday ruled that Bulgaria must issue an identity document or passport to the stateless baby of a same-sex couple from Bulgaria and Gibraltar.

Despite an earlier decision not to comment, Renew Europe, the liberal political group in the European Parliament, came out in support of their member party Progressive Slovakia after the Slovak intelligence services labelled it as “left-wing extremists”.

Albania provides “exceptionally poor” access to fertility treatment for citizens, ranking last out of 43 other European and Western countries, according to the European Atlas of Fertility Treatment Policies.

NATO Secretary General Jens Stoltenberg has applied to become Norway’s next central bank governor, he said on Tuesday, raising questions about the bank’s independence from the government if he were to be appointed. Stoltenberg and his main rival for the job, Norges Bank deputy governor Ida Wolden Bache, both said they had been encouraged by the government to apply.

Europe’s destructive twentieth-century conflicts resulted in thousands of tonnes of conventional and chemical munitions dumped into European waters. Today, these corroding weapons pose a danger to human health and to maritime economic activities. Now, more than ever, these dumped munitions must be cleared, says MEP Anna Fotyga.

Like every Tuesday, check out our Transport Brief for a roundup of weekly news.