The Brief, powered by ITI – What is the EU doing at G7? 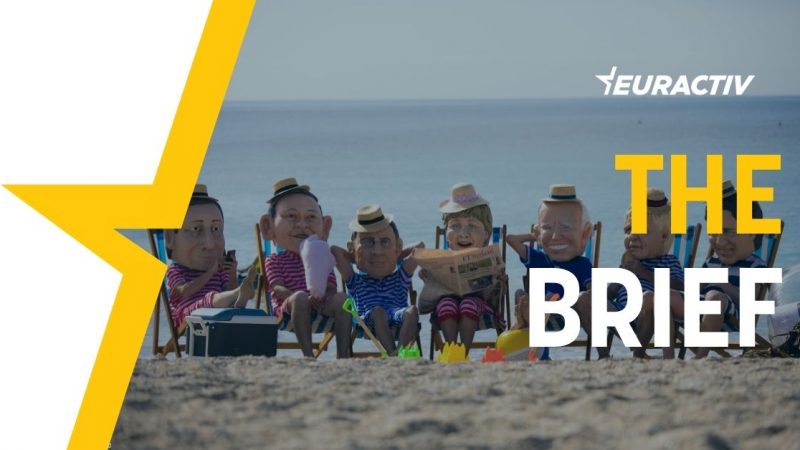 At the G7 round table, there are actually nine seats. At last week’s three-day G7 summit in Cornwall, two of them were taken by European Council President Charles Michel and Commission President Ursula von der Leyen (both of whom managed to grab a seat this time).

But what were they doing there, at the meeting of the Group of Seven countries, actually?

The G7 are the United States, Canada, the UK, France, Germany, Italy, and Japan.

It was formed as a grouping of the world’s most advanced economies and wealthiest liberal democracies, back in 1973, when Spain was still a dictatorship.

Spain’s membership was later proposed, but the forum, which is not based on a treaty and has no permanent secretariat or office, proved to be too conservative for such an opening up.

However, the group was indeed enlarged in 1998, when, under Boris Yeltsin, Russia formally joined, and the group was renamed the Group of Eight (G8). Under Vladimir Putin, Russia’s membership was suspended in 2014, in response to its annexation of Crimea, and in 2017, Russia announced its permanent departure.

Representatives of what was then the European Community participated in the G7 summit for the first time in 1977. The role has expanded over time, with the EU gradually included in all political discussions on the summit agenda. From 1981 onwards, the EU has been taking part in all working sessions.

The European Union is in the unique position of a “non-enumerated” member.

It does not assume the rotating G7 presidency but, as a unique supranational organisation, is represented at G7 both by the Council and the Commission chiefs, as the Treaty of Lisbon basically failed to produce a single figure capable of embodying the EU by itself.

But the question still remains: What were Michel and von der Leyen doing in Cornwall, except annoying summit host Boris Johnson, who prides himself on having taken the United Kingdom out of the EU?

The EU doesn’t have intelligence services, it doesn’t have an army. Aren’t the EU representatives somewhat diminished at the seven-nation table?

Moreover, von der Leyen and Michel need to keep a low profile and speak softly at G7, where they should be careful not to eclipse French President Emmanuel Macron and German Chancellor Angela Merkel, the real political heavyweights who appointed them.

Michel explained that the EU had spent the three days at G7 to align the positions of the world’s leading democracies, to convince them to join the EU’s leadership on accelerating global vaccine deliveries, to join forces as liberal democracies and open societies, and to mobilise funds for Africa.

Von der Leyen meanwhile chose to highlight the EU’s twin priorities, the green and digital transitions. In terms of climate, goals include net-zero emissions by 2050, the phase out of coal limiting the rise in global temperatures to 1.5 degrees Celsius.

Digital priorities include protecting democracy, the rule of law, human rights and freedom of expression – offline and online – and combating cybercrimes, especially ransomware.

Some of these words of wisdom eventually found their way into the G7 final communiqué, some didn’t.

Journalists are used to seeing Michel and von der Leyen splitting the communication following EU summits, each focusing on different topics. The general impression, however, is that the EU doesn’t speak with one voice and that the hierarchy of its priorities is blurred.

For EU citizens, it is almost a well-kept secret that leaders of the EU institutions take part in the G7 format. Which also means that the vast majority of Europeans don’t really feel represented there.

Protesters and cartoonists don’t even bother to target EU representatives with their G7-related satire. Until the day they do, it’ll be clear we aren’t the only ones wondering what the bloc is doing there.

A message from ITI: Prioritizing EU-U.S. Tech and Trade

President Biden’s visit to Brussels is an opportunity to deepen the important EU-U.S. relationship. Read recommendations by ITI – the Information Technology Industry Council – at itic.org.

While negotiations on the EU’s Common Agricultural Policy reform have not been concluded in Brussels, the German Bundestag, racing to complete work before national elections in September, has passed a legislative package to be implemented at the national level.

The leaders of the NATO countries are performing a delicate balancing act over China at the summit on Monday, in an effort to show firmness, but avoid language that would antagonise such a huge world economic power.

What if China were to cut off the United States and Europe from access to rare minerals that are essential to electric vehicles, wind turbines and drones?

An EU-wide emissions trading system for the transport and building sectors would secure the financing of low-carbon solutions and support lower-income households and member states through the redistribution of carbon pricing revenues, argue Matthias Buck and Andreas Graf.

A group of international institutional investors coordinated by the Attestor Capital fund, on the hook for €2 billion in the Banco Espírito Santo case, want the European Commission to settle the case, warning that otherwise, they will not fund the post-pandemic economic recovery.

Communication about the importance of plasma donations can be improved by focusing on a clear definition in the EU legislation, ensuring that more awareness is raised about the role it plays in producing life-saving medical products, a centre-right EU lawmaker told EURACTIV.

The European Union is set to become the continent’s largest supranational bond issuer within the next five years as a result of its SURE and NextGeneration programmes, aimed at helping the bloc’s economies recover from the damage caused by the COVID–19 pandemic.