The Brief – Putin’s world is not so small 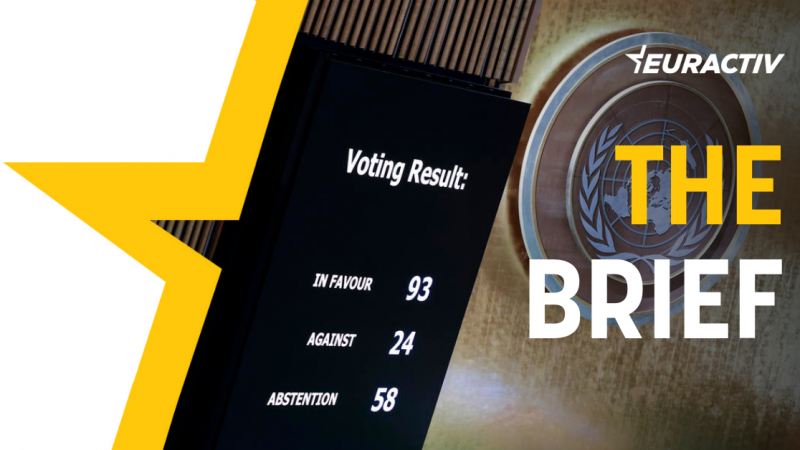 After launching a dirty war against Ukraine, Vladimir Putin has found himself isolated in the West, but he can still count on international support, including from some of the world’s most populous countries.

The 7 April vote in the UN General Assembly that suspended Russia’s United Nations Human Rights Council membership provides insight into Moscow’s influence, which is not as limited as the West might like to think.

Such votes occur after intense lobbying from the interested parties, in this case, the US, the EU and G7 on one side and Russia on the other.

Moscow used threats, including adding the countries that would support the resolution to the list of “unfriendly countries”, which already includes the whole of the EU.

After such a tug of war, it is important to see which countries voted in favour, which were against, which abstained, and which were not present during the vote (a convenient but not very honest way to avoid taking a position).

The countries which voted in favour are the most numerous, totalling 93. They include the United States, all the G7 members, all EU members, all the EU candidate countries, including traditionally pro-Russian Serbia, and half of the Eastern Partnership countries, namely Ukraine, Georgia and Moldova.

However, it is the list of 24 countries that voted against that is more interesting.

The representatives of 18 countries did not show up. This includes two members of the EU’s Eastern Partnership, Armenia and Azerbaijan. The others are Afghanistan, Benin, Burkina Faso, Djibouti, Equatorial Guinea, Lebanon, Mauritania, Morocco, Rwanda, São Tomé and Príncipe, Solomon Islands, Somalia, Turkmenistan, Venezuela and Zambia.

If we colour the world map accordingly, almost all of Africa will flash as Russia-friendly (voting against suspension or abstaining), with only a handful voting with the West.

In light of the impending worldwide food crisis, which will hit Africa perhaps more than others, Europe should be aware of the risks, which perhaps necessitates further commentary.

Another continent with many Putin-friendly countries is Latin America, where more than half of the territory (the countries in the Eastern part) voted against or abstained.

Last but not least, the world’s largest continent, Asia, except South Korea and Myanmar, appears lost to the West. While the number of countries that voted in support of the resolution was higher, the total population of the nations against and abstaining outweighs that of the Western vote.

In a nutshell, while the global GDP voted against Putin, the global population did not follow.

Our world is indeed divided.

Many countries that did not vote in favour are authoritarian or undemocratic, and some are even dictatorships. Some have close relations with Moscow for geographic or historical reasons. Others harbour anti-Western sentiments and are receptive to Russian propaganda.

In any case, those who didn’t support the resolution are numerous and should not be regarded as a fringe minority.

We are a long way from the late 1990s when the gulf between Russia and the West appeared to be shrinking: when the G7 became the G8 for the period between 1997 and 2014, just before Russia annexed Crimea. Over the same period, the EU and Russia held summits twice a year, until the fateful 2014.

Russia could have been part of the West, but that is now history.

At the same time, the UN vote shows that the EU’s influence is possibly more limited than it hoped – both worldwide and in its own neighbourhood.

The European Union’s executive is drafting proposals for an EU oil embargo on Russia, the foreign ministers of Ireland, Lithuania and the Netherlands said on Monday, although there is still no agreement to ban Russian crude.

The two European Parliament co-rapporteurs finalised the Artificial Intelligence (AI) draft report on Monday, covering where they have found common ground. The most controversial issues have been pushed further down the line.

Wind energy will play a key role in helping Europe break away from Russian fossil fuels and increase its energy independence, but slow permitting and strains on the supply chain need to be tackled if Europe wants a fast rollout of wind power, according to Sven Utermöhlen.

Senior officials at the European Commission were targeted last year with spy software designed by an Israeli surveillance firm, according to two EU officials and documentation reviewed by Reuters.