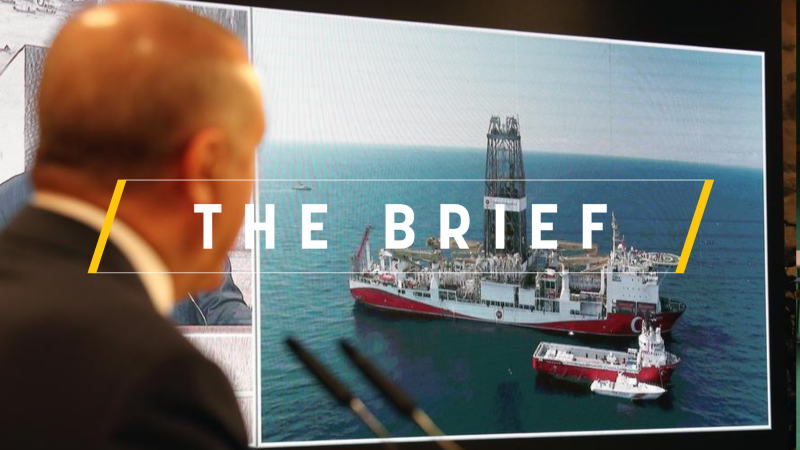 As a brief reminder: Despite being a NATO member, Ankara has bought Russian air defence, blocked the alliance’s Eastern defence plans, and engaged in a Greek-Turkish showdown in the Eastern Mediterranean which has nearly led to armed conflicts with France and Greece.

On Monday (24 August) Athens bluntly dismissed Turkey’s stated intention to start a dialogue and defuse tensions over gas drilling in the Eastern Mediterranean, saying Ankara is not reliable.

“Under the state of blackmail, one cannot start a dialogue,” Greek media quoted government sources as saying.

In turn, Turkish President Recep Tayyip Erdogan responded by saying his navy will not back down as Greece “sows chaos” in the eastern Mediterranean Sea, where the countries have deployed frigates and escalated war-mongering rhetoric, fuelled by conflicting views of the extent of their continental shelves in waters dotted with mostly Greek islands.

Of Greece’s EU and NATO partners, only France has shown full support and sent ships to the Eastern Mediterranean, angering Ankara even further and leading to a French-Turkish naval incident.

However, none of the other NATO members have so far been able or willing to decisively mediate and solve the dispute.

Although it started a ‘reflection’ process about how the alliance deals with everyday business, the alliance still has not found a solution for how to cope with its increasingly rogue member, Turkey.

A similar fate appears to be awaiting the EU if it continues to tolerate Turkish aggressive behaviour.

So far, EU officials have been too reluctant to utter the word ‘sanctions’ in relation to Turkey, though they sanctioned Russia for invading Ukraine and Georgia and are close to doing the same for Lukashenko’s regime in Belarus.

In July, EU’s chief diplomat Josep Borrell met Turkey’s Foreign Minister Mevlut Çavuşoğlu, who publicly threatened the EU with retaliation if sanctions are imposed on Ankara. The threat was met with a diplomatic appeal for dialogue.

“The precondition is that Turkey has to stop its illegal actions, it would open a whole avenue for dialogue,” a senior EU official said on the eve of the informal EU foreign affairs ministerial in Berlin.

It is not clear what measures the EU could take against Turkey.

The phrase ‘range of options’ can go both ways: either there is no unanimity for any of them, or there is a portfolio which could be gradually escalated once a concrete decision has been made.

For sure, unanimity for sectoral sanctions against Turkish banks, as Athens has requested, remains a pipe dream, though it is clear that “discreet” diplomacy toward Turkey, which countries like Spain have championed so far has not worked.

“Unanimity depends on the level of ambition,” the EU official said.

At the same time, Germany’s role in the recent discussions has led some to question its true intentions in the region.

Some pundits are suggesting Berlin’s reluctance to go stronger on sanctions is motivated by fears that sanctions might jeopardise the EU’s migration deal with Ankara, or harm Germany’s not insignificant economic interests in Turkey.

But no matter the motivation, the question remains the same. How far can Turkey challenge the EU and NATO before the bloc shows resolve and acts firmly?

The protests to unseat Belarus’ authoritarian President Alexander Lukashenko are neither pro- nor anti-Russian but a democratic revolution “for the right of the people to decide their own destiny,” the leader of the protests, Svetlana Tikhanovskaya, told an extraordinary meeting of the European Parliament’s foreign affairs committee on Tuesday (25 August).

Also have a look at the latest autumn policy forecast: In the wake of an “enlargement summit” in May that omitted the word enlargement altogether, the Western Balkans region is set to stay high on the Brussels agenda this autumn and possibly even mark one or two milestones in the drawn-out process.

The Greek government dismissed on Monday (24 August) Turkey’s stated intention to start a dialogue and de-escalate tensions over gas drillings activities in the Eastern Mediterranean, saying Ankara is not reliable.

EU defence ministers meet physically in Berlin for on informal meeting under the EU’s Council presidency with Commissioners Borrell, Breton and Vestager and NATO’s Secretary-General Jens Stoltenberg in attendance.