The Brief – The leader of the free world 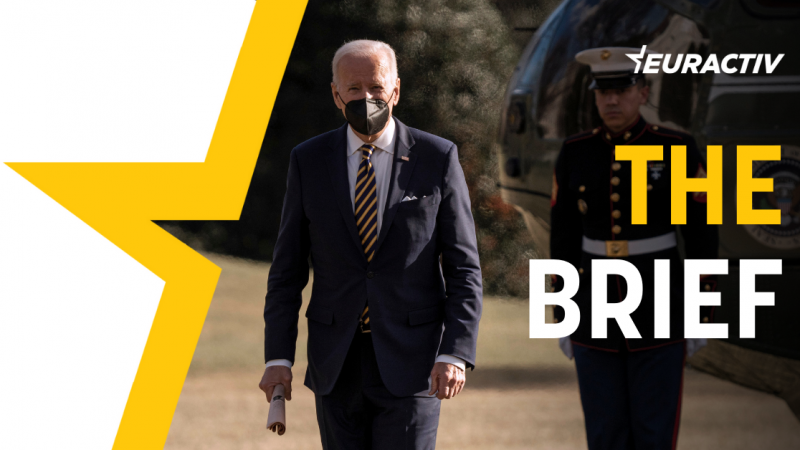 We do not know if a war will break out ‘at any moment’, but at such a dramatic juncture, it is worth taking a closer look at the supreme commander on our side of the ranks.

When Joe Biden won last November’s US presidential election, Europe heaved a sigh of relief: the Trump era had come to an end, and hopes were high for a new way of doing things. With his remarkable experience in international affairs and aura of a senior statesman, Biden was seen as a good fit for the role of ‘leader of the free world’.

Addressing State Department employees just two weeks after assuming office, Biden made clear he wanted the world to know that “America is back; diplomacy is back at the centre of our foreign policy.”

But while his approach has most certainly been different from that of his predecessor, many are doubting its merits one year on.

One of Biden’s first “diplomatic” acts was to call Putin a “killer” who would soon pay the price for his actions.

With hindsight, this remark probably was not a slip of the tongue.

Biden’s star began to fade at the time of the widely criticised withdrawal of US troops from Afghanistan last August. The images of chaos at Kabul airport will become a sad part of US history, and it remains unclear whether the Biden administration had hoped for a slightly more orderly transition.

The fact remains that the Taliban took Kabul in the blink of an eye while US and international forces and diplomats were still in their offices. Europeans will long remember being disregarded, sidelined, and left to find a way out of the country on their own.

Then in September came the AUKUS row: a deal which would see the US and UK supplying Australia with the know-how to build a nuclear-powered submarine fleet. The deal was struck at the expense of scrapping a French-Australian ‘contract of the century,’ causing a major diplomatic stir.

France will not forget how its trust was broken any time soon.

Meanwhile, Biden increasingly turned his focus to Asia and became adamant about creating some sort of NATO for Asia through mobilising allies against China.

There is no doubt that China is increasingly assertive, particularly in the scope of its influence, but instead of containment and diplomacy, Biden chose the path of confrontation. He also appeared to be following an ideological agenda.

“This is a battle between the utility of democracies in the 21st century and autocracies,” Biden said.

The Cold War was a dangerous time of tensions against an ideological background: a competition between communism and the free world, a zero-sum game. Communism lost (it survived in China to an extent, under a hybrid of capitalism and communism).

But more than 30 years later, willingly or unwillingly, Biden has pushed Putin into the arms of Xi Jinping.

The recent opening ceremony of the Beijing Winter Olympics turned into a gathering of autocracies. Putin scratched Xi’s back, and Xi his in return.

It’s now clear that China will back Russia if the latter invades Ukraine and that Russia will back the former if it takes possession of Taiwan.

Putin now acts as if the former Soviet Union had not lost the Cold War, and he dictates conditions for a return to a horrible status quo. His aggressive behaviour towards Ukraine is only a small part of the picture.

We cannot blame it on the expansion of NATO because that is not something that happened overnight, unlike Putin’s change in demeanour.

So what exactly has Biden done to offend Putin? Nobody knows, not even Macron. But it must be something deeply disturbing. If Putin invades Ukraine, this will be his answer to the offence.

If the Ukraine conflict escalates into war, it will be tragic for Russia, and possibly reminiscent of Moscow’s traumatic and failed intervention in Afghanistan in the 1980s, and it will create problems for Europe, but the US will escape relatively unperturbed. Biden may even see a rebound in his ratings at home.

Action to improve diversity and inclusion (D&I) in the European media and audiovisual sector needs to come from all, not just a select few, of the stakeholders involved, the EU’s first Anti-Racism Coordinator has said.

While the development of a digital euro offers new opportunities for Europe, they can only be seized if civil society can take part in this discussion, argues an opinion piece signed by more than 100 scholars and NGOs.

As the tensions in Ukraine reach a critical phase, German Chancellor Olaf Scholz was due to visit Kyiv and Moscow on Monday and Tuesday in a bid to prevent the outbreak of war and bring Russia back to the negotiation table.

Be on the lookout for…