The Brief – The worst job in the world 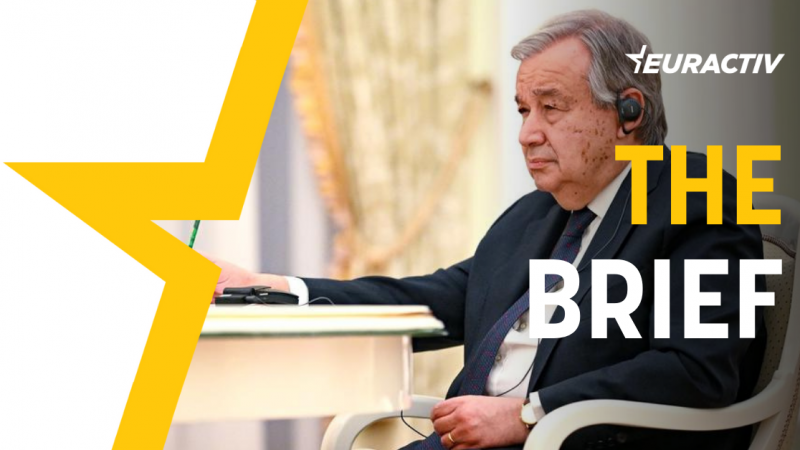 The job of the UN secretary-general is supposed to be the ultimate achievement for a senior diplomat with a flawless reputation and outstanding international career. But the body language of Antonio Guterres during his meeting with Vladimir Putin suggested otherwise – that he, in fact, may have the worst job in the world.

To start with, the United Nations is one of the victims of Putin’s war in Ukraine. The organisation, created after World War II to maintain international peace and security, has seen many crises, but this war is likely to shake it more than any previous event.

The UN and Guterres personally are currently under fire for playing a limited role in conflict settlement. Many analysts note that he made the trip to Moscow and Kyiv only in the ninth week of the war. Moreover, many believe that he made the visits in the wrong order by meeting the aggressor before the victim.

Furthermore, the UN and its agencies have been slow to react to the humanitarian crisis and the risk of leakage from Ukraine’s nuclear power plants. There has been little action from the International Atomic Energy Agency (not exactly a UN body, but it reports to the UN).

Three months into the Russian invasion of Ukraine, UN agencies are invisible or inefficient, especially when it comes to reaching civilians under siege in the east of Ukraine, where humanitarian assistance is sporadic.

There is little Guterres can do in the UN Security Council, where Russia holds veto power, and efforts to pass resolutions condemning the aggression have been in vain.

But suppose the UN and its refugee agency UNHCR remain absent from Mariupol, whose siege will enter history alongside Leningrad and Sarajevo. In that case, the reputation of the world organisation – and Guterres – will suffer.

Additionally, when Guterres, a respected socialist former prime minister of Portugal, is absent from the real negotiations, don’t be surprised if Turkey’s autocrat Recep Tayyip Erdoğan jumps in.

Last but not least, Guterres has little to be proud of in terms of what he told Russia’s Foreign Minister Sergei Lavrov, specifically that he understood Moscow’s grievances.

During Guterres’s visit, Russia took the unprecedented step of cutting gas supplies to Poland and Bulgaria. In line with the same playbook, Russia expelled EU diplomats when top EU diplomat Josep Borrell was in town. Putin’s Russia loves to humiliate its foreign guests.

When Putin, seated well away from Guterres at his now-infamous long desk, repeated his earlier claims that Moscow was not involved in alleged atrocities in Bucha, Guterres said nothing. His position is that such allegations will be investigated – but not by the UN.

In fact, Guterres only announced his mediation effort after more than 200 former United Nations officials sent him a letter urging him to intervene, warning that the UN was being marginalised in the crisis to the point of extinction.

This author of the Brief remembers the selection process for the secretary-general that was ultimately won by Guterres, largely as a result of Russian support for this Merkel-generation European candidate. (Under the Byzantine UN system, it was time for a candidate from Europe.)

He took the job promising to deliver on three priorities for change: working for peace, supporting sustainable development, and improving internal UN management. He has recently won backing for a second five-year term.

We understand the limitations to what a UN secretary-general can say and do, but it isn’t easy to defend Guterres.

Either he has the worst job in the world, or he is making it appear that way through his poor performance.

The UK government has decided not to impose customs checks on EU imports until the end of 2023, in a major policy U-turn announced on Thursday.

Since the pandemic, the public image of big pharma companies such as Sanofi, Pfizer, AstraZeneca, and Bayer has improved, according to a survey of 2,150 patient groups worldwide.

The EU Court of Justice ruled on Thursday that consumer groups can autonomously bring legal proceedings for alleged breaches of data protection rules as long as national law allows it.

As Russia’s war in Ukraine rages on, the need to reform the EU and take citizens’ voices into account has become more apparent, according to politicians involved in the Conference on the Future of Europe.

Bulgaria’s Prime Minister Kiril Petkov urged Europe on Thursday to be “stronger” and find alternatives to Russian gas, during a visit to Ukraine.

Don’t forget to check out this week’s Economy Brief.