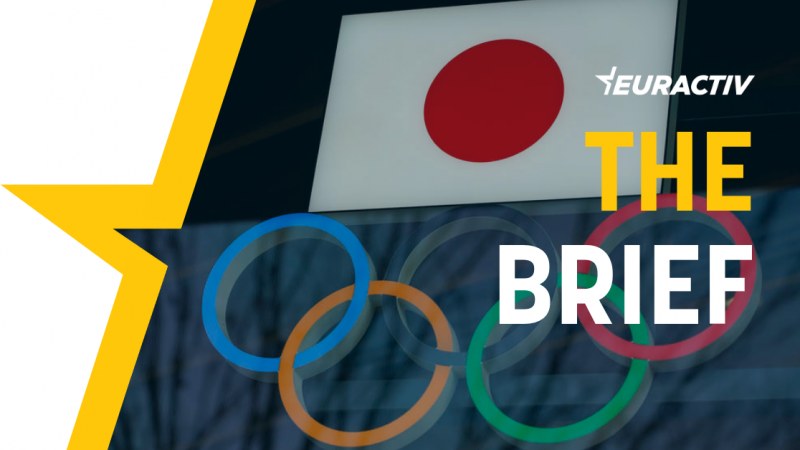 Since their start in 1896, modern-day Olympic Games have rarely been free of politics. The upcoming Tokyo Games, opening on Friday, seem unlikely to break away from that pattern.

Rule 50 of the Olympic Charter, reaffirmed by the International Olympic Committee (IOC) ahead of the Tokyo Games, is a curious thing. It says that “no kind of demonstration or political, religious or racial propaganda is permitted in any Olympic sites, venues or other areas.”

It’s a message that might have not quite reached the corridors of the Berlaymont, or those of some rather critical EU watchers, who misinterpreted its aim.

EU Commissioner Margaritis Schinas and Slovenian Prime Minister Janez Jansa said on Sunday (18 July) they had asked athletes from Slovenia – currently holding the EU Council’s rotating presidency – to be allowed to bear the bloc’s starred flag along their own national flag at the Tokyo Olympics opening ceremony.

Schinas, whose portfolio on the Commission team includes “promoting the European way of life” and a sports component, wrote that the flag could stand as a “symbol of peaceful coexistence, tolerance and solidarity”.

A gesture aimed at boosting European common identity seems admirable, but the way it has been done leaves a bit of a bad taste.

The author of this text, an avid fan of the Olympics, cannot help wondering from which Commission drawer this proposal came, half-baked just like Commissioner Schinas’s portfolio of the European Way of Life.

Olympic ceremonies don’t fly flags of political organisations, so why should the EU get extra treatment? And in that case, wouldn’t we need to add the UN flag, too? And what would this mean for all other (major international) sports events?

Asked by reporters to clarify, the European Commission said it didn’t want to “go beyond the letter sent” and declined to comment further on the issue.

It is not the first time the EU has made such a push. But to be fair, this might be the most unsubstantial attempt at Olympic flag politics these days, and it came as flag politics are already in full play, well before these Olympics even kicked off.

South Korea’s Olympic committee said at the weekend it had removed banners at the Olympic athletes’ village in Tokyo that referred to a 16th-century war between Korea and Japan after the International Olympic Committee ruled they were provocative.

South Koreans said they had received a promise from the IOC that the Japanese “rising sun” flag, a symbol of Japan’s wartime past, will be banned at stadiums and other Olympic venues.

Eagle-eyed sports fans are likely to spot one more peculiar sight on Friday.

About 303 Russian athletes are set to compete under the Olympic flag this time, rather than for their own country.

The reason: Russia’s team name, flag and national anthem were banned from this year’s Tokyo Olympics and the 2022 Winter Games in Beijing by the Court of Arbitration for Sport because of large-scale doping accusations.

Remember Euro 2020, where footballers (or some of them) took the knee before kick-off to show support for the Black Lives Matter movement and to protest against racism and social injustice?

In June, a group of high-profile US athletes sent a letter to the IOC and the International Paralympic Committee asking them to update Rule 50 to allow for athletes to express their views in specific places and mediums. It has since been updated.

Some veteran US Olympians, however, have recently pleaded to keep the Olympics inherently anti-political, including not turning their backs to the flag and using their voice on other forums.

At the same time, these Olympics will see some positive developments, too.

This year will be the first time that Olympic teams are allowed to select both male and female flag-bearers as part of the International Olympic Committee’s efforts to finally increase gender equality.

According to the IOC, these Olympic Games will be the first in history to have close to half a women participants, with 48.8%.

No big deal, you say? Well, China has traditionally chosen male athletes, predominantly its top NBA basketball players, as flag-bearers. In that sense, it kind of is a huge deal, raising the bar for largely male-dominated national delegations.

Even if you’re not really tempted, keep an eye: When the Tokyo Games start this Friday, there will for sure be more than enough hidden politics.

European Commissioner Margaritis Schinas and Slovenian Prime Minister Janez Jansa said on Sunday (18 July) they had asked athletes from Slovenia – currently holding the EU Council’s rotating presidency – to be allowed to bear the bloc’s starred flag as well as their own national flag at the Tokyo Olympics opening ceremony.

For Georgia, who last April initiated the Associated Trio format with Ukraine and Moldova, the presence of European Council President Charles Michel at a summit of the three countries in Batumi on 19 July is perceived as a milestone. Read our unfolding special report here.

One response to “The Brief – Watch your Olympic (flag) politics”