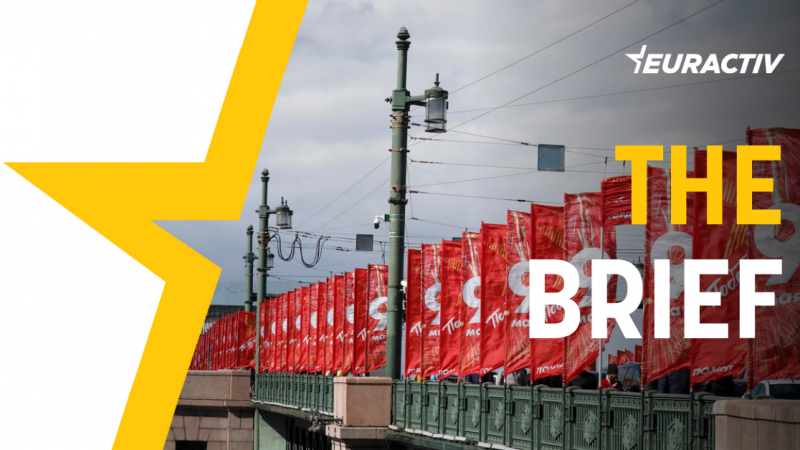 For those who don’t know Russia well, we should start by saying that in that country, 9 May is elevated to a sort of religious extravaganza, like Easter and Christmas wrapped into one.

Unlike in Western Europe, where V-day is celebrated on 8 May, Russians mark the “Day of Victory”, the end of World War II in Europe, on 9 May because the news was announced by the national radio to the Soviet people one day later.

The Soviet Union played a decisive role in WWII, which Russia calls “The Great Patriotic War”. It cost the USSR 27 million dead, according to Moscow. (The victims of Stalinism are estimated at 20 million, but under President Vladimir Putin, who restored the cult of Stalin, they have been conveniently forgotten.)

In previous years, Russian diplomacy regularly made considerable efforts to secure the presence of foreign leaders at the ostentatious Red Square parade.

This became more difficult after the Crimea annexation of 2014. Still, Russia then concentrated on a new initiative, the “Immortal Regiment”, to increase its influence in some countries in Eastern Europe.

It is unlikely that any other leaders, except Alexander Lukashenko of Belarus, will stand next to Putin at this 9 May parade. The usual suspects – the leaders from Central Asia and Serbian President Aleksandar Vučić – will likely think twice because their presence would not sit well with their international image.

In Ukraine, we have seen many images of Russian tanks and other war machines decorated with the red Soviet flag, with the hammer and the sickle.

According to the Russian narrative, this war, which Moscow does not even call war, is a continuation of World War II against Nazism, the Nazis being the government of Ukraine, but also against NATO and what it calls the collective West.

Putin’s Russia provides the clearest example that “history doesn’t repeat itself, except first as a tragedy, and then as a farce” (as Karl Marx said).

Some predict that on 9 May, Putin will officially declare war on Ukraine and possibly on “global Nazism”, meaning those who support Kyiv. Russia denies it. We shall soon see.

If Putin is trying to restore the Soviet Union by force, first in Ukraine, second in Moldova, third, possibly, in Georgia, he is failing. Whether he realises it or not is a different matter.

After World War II came the Cold War, which the Soviet Union lost, something Gorbachev and then Yeltsin accepted. Putin doesn’t accept it and asks the West to turn back the clock to 1997 as if the former countries in the Soviet orbit were still territories to be distributed, as was done in Yalta in 1945.

We can only wonder what Putin has to celebrate on 9 May. Russia is becoming a pariah country, it will lose the brightest of its people to emigration, and the living standards will fall back to Soviet Union levels.

Less than a decade ago, Russia was a member of G8, Putin was attending EU summits twice a year, the rich countries were investing in Russia, and visa liberalisation with the EU was discussed.

Russia could have integrated with the EU, in one form or another, which would have been our continent’s most significant geopolitical achievement in modern times. Russia becoming part of the West was once referred to as “the end of history”.

All this is water under the bridge now. Today we are talking about World War III, which might have already started in a hybrid form, and could end in a nuclear holocaust.

On 9 May, Putin can celebrate the support he still commands internally – Russian propaganda will offer us the images.

He may draw unhealthy satisfaction from petrifying the world with the nuclear threat.

He may even still believe he will win the war of aggression against Ukraine.

But one way or another, he will have to wake up to reality: There is nothing to celebrate.

A message from NGVA Europe
Biomethane (bio-CNG & bio-LNG) fuelled vehicles are a carbon-neutral solution, ready to play their role in achieving rapid GHG emission reduction. Including a voluntary crediting system in the CO2 emission standards is key.
Learn more.

French President Emmanuel Macron is not expected to name the next prime minister before the end of next week although he is already being officially sworn in for a second term on Saturday (7 May), as several prominent figures have reportedly already turned down the job. EURACTIV France reports.

The EU should confiscate and sell Russian assets it has seized and use the proceeds to rebuild war-scarred Ukraine, EU chief Charles Michel said in an interview published Thursday.

Meanwhile, the mental health of Ukrainians and those in exile was at the heart of discussions for the first time at the WHO mental health coalition meeting on Wednesday (4 May), attended by EU Health Commissioner Stella Kyriakides. EURACTIV France reports.

EU lawmakers condemned the use of rape as a war tactic in Ukraine and called on the EU to ensure women refugees can access contraception pills and abortion across the bloc, in a resolution adopted on Thursday.

In its attempt to create an EU-wide market for clean hydrogen, the European Commission aims to build on years of experience spent trying to integrate EU markets for gas and electricity. These lessons could prove crucial to grow the hydrogen market and meet the bloc’s 2030 climate goals.

In other news, many Britons living in the EU feel disconnected from and embarrassed by their country since Brexit, according to new research published on Wednesday.

A new report from the World Health Organisation (WHO) has revealed that obesity causes 1.2 million European deaths every year, while not a single EU country is on track to reach the target of reducing obesity rates by 2025.

Last but not least, don’t forget to check out our latest weekly Economy Brief: The EU works – when it ignores its rules.