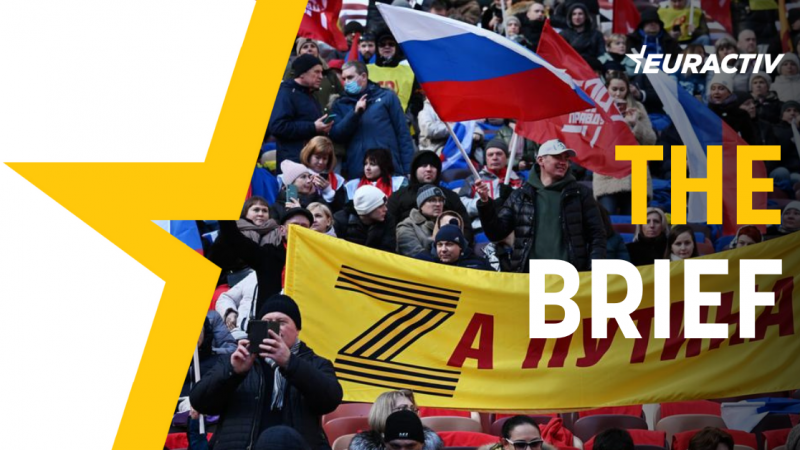 Vladimir Putin demands the ‘denazification’ of Ukraine. But under Putin, Russia has turned into a totalitarian state strikingly reminiscent of Nazi Germany.

I will argue that the clearest proof for this assumption is that Putin himself has become the inspiration for far-right forces elsewhere.

In this Brief, I will only use the example of the country I know best – Bulgaria.

A key element in Putin’s narrative explaining the war he started is the alleged need to ‘de-Nazify’ Ukraine. The narrative is intended to strike a chord with Russian sensitivity over World War II.

Russians indeed made the biggest sacrifice – in terms of lives lost and war effort – for the unconditional defeat of Nazi Germany. Comparing ‘the Great Patriotic War’, as Russians call it, to their present dirty war against Ukraine appears far-fetched to us in the West, but not to many in Russia.

Since Putin came to power, Stalinism has been whitewashed and Stalinist crimes have become taboo, as illustrated by the closure of ‘Memorial’, an NGO that worked to preserve historical memory in Russia and document human rights violations. History has been conveniently re-written.

Accordingly, the West is accused (to some extent rightfully) of using Nazi criminals for projects such as the US nuclear bomb and missiles project or in the Cold War against Russia.

History is indeed complicated, but not in Russia. Putin’s propagandists make it simple: The “collective West” is some sort of heir to Nazism, and its goal is the destruction of Russia.

Accordingly, the main threat for Russia today comes from Ukraine, where neo-Nazi organisations, such as the Azov battalion, purportedly with 900 soldiers, have been given free rein.

They are also told that a far-right Ukrainian politician from the period of WWII, Stepan Bandera, is being glorified.

Therefore, many Russians believe the ground is being prepared for US bases and US missiles aimed at Russia.

For Putin, it doesn’t matter if the Russian propaganda is successful everywhere. It’s enough if it works at home and is well accepted in some parts of the world and some circles of Western societies.

When I interviewed the Russian ambassador to the EU, Vladimir Chizhov, on the second day of the war, I asked him to specify who the Nazis in Ukraine were. He said it was those who marched with a Nazi salute and who glorified Bandera.

I asked him if Russia would then come to invade my country, Bulgaria, under the same excuse. As in any other country I know, Bulgaria’s far-right movements can rightly be called neo-Nazi.

He said no, because, at least, in his words, Bulgaria has not erected monuments to neo-Nazis. (He didn’t say what I expected – that Russia would not attack us because we are in NATO.)

But what is interesting is that in Bulgaria, the parties that can be described as neo-Nazis are today marching with banners glorifying Vladimir Putin.

Historically the oldest of them is Ataka of Volen Siderov.

Siderov, who has used symbols of pro-Nazi Bulgarian organisations from WWII, has been called by the German press “Putin’s man in Bulgaria”. He rushed to recognise Crimea’s annexation in 2014 and vowed to topple the Bulgarian cabinet if it joined EU sanctions against Russia (he was not successful).

Today, Siderov and Ataka are still alive, but their ratings have dwindled because a new party, Vazrazhdane (Revival), has muscled in and appropriated the same rhetoric.

Led by Kostadin Kostadinov, a younger version of Siderov, Vazrazhdane gained popularity thanks to their anti-vaxxer and pro-Putin rhetoric. They call themselves “the only true patriots”, they wage war against “foreign foundations and NGOs”, their ideology can be described as national-socialist (Nazi), and they are now represented in parliament.

Every day, Kostadinov and his MPs make speeches supporting Putin, against NATO, and Bulgaria’s country’s membership of the alliance. Kostadinov even said he would ‘de-Nazify’ Bulgaria, whatever that means.

When we watch Vazrazhdane, with their banners, waving Russian flags, shouting “NATO out” and “Russia” on the Bulgarian National Day, we should realise we have a problem.

When we watch Putin’s recent rally on the occasion of the eighth anniversary of the annexation of Crimea, we cannot fail to think about Nazi rallies from the 1930s.

One of the slogans in Russia today is “World without naZism”. The letter Z, painted in white on the Russian tanks in Ukraine, is becoming the symbol of Putinism in Bulgaria as well. Just like the symbol of Nazism was the Swastika.

On 10 and 24 April, the French will go to the polls to choose the president of the republic for the next five years. Amid a health crisis, an ecological emergency and a war on Europe’s doorstep, this election will be historic, both for France and for Europe. EURACTIV France explains everything you need to know about this election in this video.

Following the success of a vote on enhancing transparency on company gender pay disparity, European Parliament is poised to debate and vote on their position during the upcoming 4-7 April plenary session.

In Serbia’s predominantly Russia-leaning public space, aligning with the bloc as an EU candidate country is not a popular political message ahead of the parliamentary, presidential, and Belgrade elections on 3 April.

Industry stakeholders say that a greater emphasis on digital education will be crucial to closing both the skills and gender gap in the digital sector, calling for more attention to boost capacity.