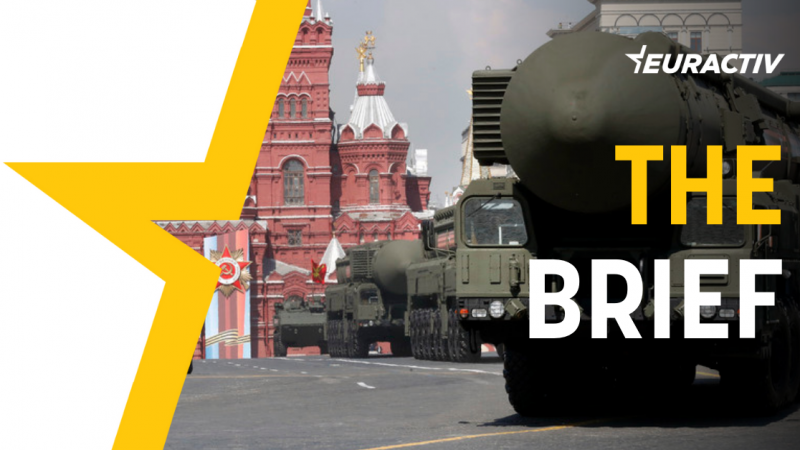 For the first time since the 1960s, Russia’s dirty war in Ukraine has opened Pandora’s box of escalation that may lead to a nuclear war.

The main problem for Russia is that the war is not going to plan, and conventional warfare appears useless. This is why on Russian television, anchors (or rather official propagandists) and their guests (military experts) threaten the West with nuclear annihilation.

One of them said that the West was afraid of a nuclear war, and consequently, Russia should show that it is ready for it, “that we love it, that we like to make it”. Another one spoke about wiping out Warsaw, the capital of Poland, “in half a second”.

NATO Secretary-General Jens Stoltenberg reacted on 22 March by saying that “Russia must stop its nuclear sabre-rattling”, calling it “dangerous” and “irresponsible”.

“Russia must understand that a nuclear war should never be fought and that they can never win a nuclear war,” the NATO chief said, adding that this was actually something that Russia used to agree with in the past.

But obviously, something is changing.

For Russia, the nuclear threshold is linked to whether its fundamental interests are threatened. Putin has said that a world without Russia should not exist.

In that sense, Russia could take as a pretext for the use of nuclear weapons not only a presence of foreign troops in Ukraine (be it a “no-fly zone” operation or peacekeepers on the ground), but also statements perceived as utterly hostile, such as sanctions aimed at “destroying Russia”.

The Russian Federation is fragile, in much the same way as the USSR used to be, and will become even more fragile as sanctions bite. A perceived Western aim to destroy the Russian Federation could indeed be a casus belli, justifying (in Kremlin logic) the use of the weapons of doom.

In that sense, the Western message should not be unnecessarily offensive. The Western response, which indeed includes unprecedented sanctions, aims to stop the war, not destroy Russia.

The sanctions are not an act of war.

In a scenario where Russia is losing the war it started, the Kremlin will be looking for a provocation to justify the use of unconventional weapons, which would make it look strong again and capable of dictating a post-war settlement.

Simulations of steps leading to nuclear war have been conducted in selected universities such as Stanford and are purportedly used to train the new US presidents. Paperback writers also use it in their war novels.

With the Ukraine war, the world has reached a threshold when escalation to global destruction only takes a few steps over a few days or less.

According to German intelligence, Russia may use chemical weapons in Ukraine. Chancellor Olaf Scholz has reportedly warned Putin in direct talks not to use biological or chemical weapons, telling him that such a move would be “unacceptable and unforgivable”.

If Russia uses chemical weapons, will the West stay idle? Let’s assume that there will be an asymmetric military reply – possibly on a Russian ship in one of the oceans.

Russia would then retaliate, possibly by wiping out a symbolic place with nuclear weapons. Warsaw indeed qualifies, as does Riga, Tallinn, or Vilnius.

The US would then need to decide whether it accepts launching a nuclear attack on Russia, knowing that Russia would fire back and kill tens of millions of Americans.

We assume that this would be a difficult decision. If the US doesn’t fire its ballistic missiles in retaliation for Warsaw, Putin will have destroyed NATO and claim victory.

Unlike EU countries, Washington had very reliable intelligence on Russia’s preparations to invade Ukraine. It will be very interesting to find out what Biden will tell EU leaders behind closed doors.

NATO, G7 and EU leaders, including US President Joe Biden, are holding three successive summits in Brussels to discuss Russia’s aggression and the ways to help Ukraine. For details of everything related to the summits, follow our Live Blog.

At the insistence of Spain and other southern countries, EU leaders will instruct officials to look into the contagion effect of gas prices on electricity markets, according to draft summit conclusions seen by EURACTIV.

Outraged by the continued presence of French companies in Russia, Yannick Jadot (EELV) has gone on the offensive against French oil giant TotalEnergies, which has announced its intention to sue.

Reuters has removed TASS from its business-to-business marketplace for customers, according to a Reuters message to staff on Wednesday, amid growing criticism of how Russia’s state-owned news agency is portraying the war in Ukraine.

To prevent the spread of COVID-19, countries receiving Ukrainian refugees are encouraged to ensure that vaccines are available. Of the seven vaccines authorised in Ukraine, two are not authorised by the EU drugs agency, and the World Health Organisation says mix and match technology needs to be used in these cases.

The UK government and European Commission need to do more to explain how changes to EU law could impact Northern Ireland, UK lawmakers warned this week, amid growing concerns about the unique democratic deficit that faces the province.