The cautionary tale and the million-dollar question in Gaza 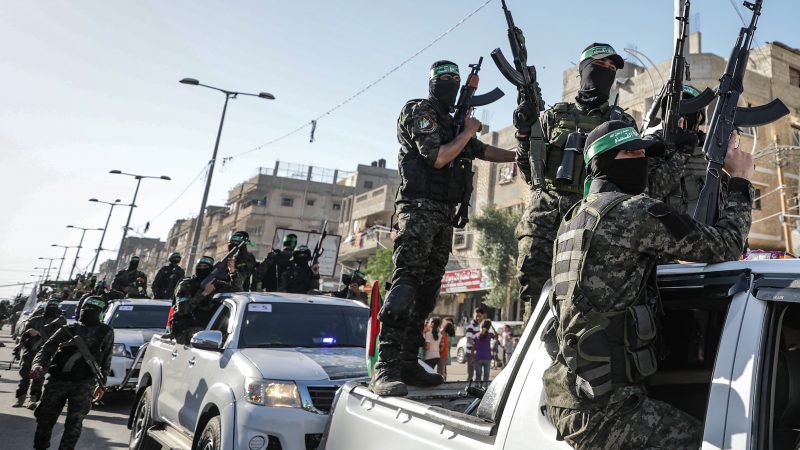 File photo. Izz ad-Din al-Qassam brigade fighters, the military wing of Hamas, parade to commemorate the al-Qassam fighters who were killed during the recent conflict in Gaza City, 27 May 2021. [EPA-EFE/MOHAMMED SABER]

How do we go about efficiently allocating the EU aid in the extremely complex environment following the latest conflict between Israel and Hamas? Getting the answer right is worth every dollar of our aid channelled to Gaza, writes Jakub Kulhanek.

Jakub Kulhanek is Minister of Foreign Affairs of the Czech Republic

It has been nearly two months since we witnessed yet another conflict between the State of Israel and Hamas, the EU-designated terrorist organization, which in effect controls the Gaza Strip. Although the fighting fortunately lasted “merely” 11 days, this escalation was the worst since 2014. The human losses and material costs on both sides are devastating. At the same time, no one should doubt that Israel was under vicious attack and simply had to exercise its right to self-defence. And now, in the aftermath, we are left with a cautionary tale and the million-dollar question: what is to be done in the long term in order to break the cycle and to prevent another round of conflict and how can we help the people of Gaza without empowering Hamas?

As for the cautionary tale, it boils down to following through with lessons learnt. The underlying factor behind the recent bout of violence which must be taken into consideration is the unabated replenishment of Hamas’ military arsenal prior to the escalation. The fact that Hamas has managed, despite widespread international isolation, to significantly boost its war-waging capabilities and to utilise them to launch large-scale attacks against Israel, is the critical conundrum which must be addressed in the long run.

The EU has expressed full support for Israel’s right to self-defence, and we must absolutely continue to do so. The wretched mindset of Hamas has been that of a terrorist organisation. Throughout the 11 days and nights, Hamas and other terror groups in Gaza were able to fire more than 4,000 rockets into Israel. Moreover, they did so using advanced equipment which allowed them to threaten Israel from a range previously unthinkable. All this was done as part of Hamas’ deliberate and cruel policy of using heavily populated civilian areas as a staging ground to launch indiscriminate attacks against Israel.

The commitment to alleviate the plight of the civilian population of Gaza through relief and humanitarian assistance has been at the forefront of EU’s strategic objectives in the aftermath of the conflict. I find it most encouraging that there is consensus, not just within the EU, on the fact that in pursuit of that goal, it is imperative that Hamas and any groups inciting violence and hatred be barred from reaching those resources and misusing our aid or funds for their malign objectives.

This brings me to the million-dollar question: how do we go about efficiently allocating our aid in this extremely complex environment? Getting this question right is worth every dollar of our aid channelled to Gaza. It needs to be reflected in our practical decision making as we join efforts with UNRWA and other agencies and partners on the ground, and we need to be able to assert it vigorously in order to prevent our aid from being misused to jeopardize Israel’s security.

We must make Hamas and other terror groups understand that we are keeping a firm and unified stance, uphold it in practice, and press for full compliance with the Quartet principles: recognising Israel, renouncing violence, and adhering to previous diplomatic agreements are essential conditions for any chances of a long-lasting solution to bear fruit.

Moreover, in coordination with our international partners, we need to actively encourage all mediation efforts which reflect those principles, as well as to inspire others to use their influence to bear on Hamas.

I am deeply convinced that requesting anything short of the Quartet principles would be harmful not only to our credibility as the EU, but also to the security of Israel and to the possibilities of changing the dire situation in Gaza and the situation of its civilian population for the better. But as the EU engages in any complex diplomatic activities in the Middle East, more than ever we should go to great lengths to ensure that our humanitarian aid is not being misused.