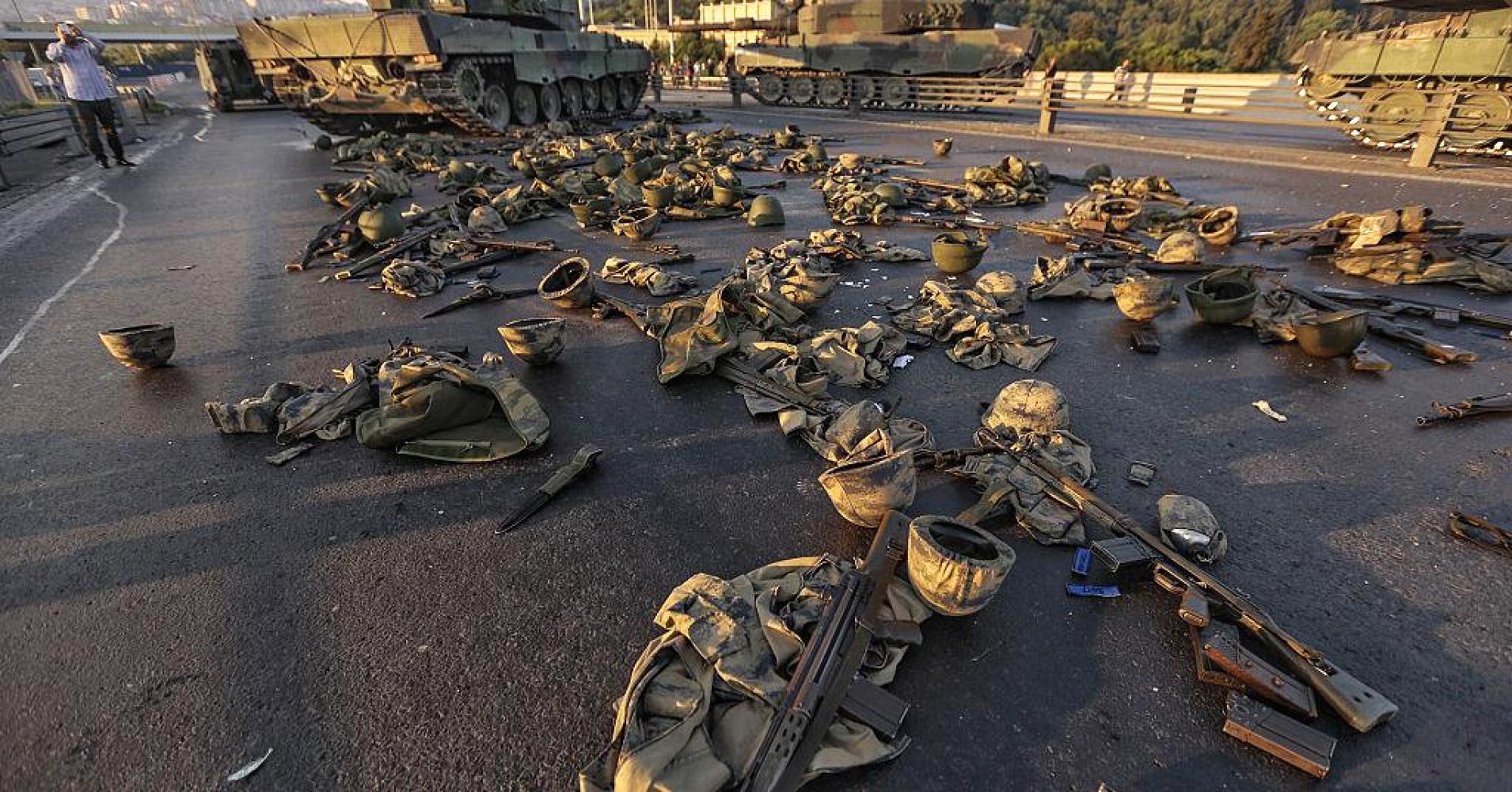 On Friday night, we heard that tanks had been deployed in Istanbul, two bridges over the Bosporus were closed and fighting in Ankara had erupted. Given that an armored invasion of Turkey was unlikely, it became clear that we were seeing an attempt at a coup d’état. During the Cold War, such coups were common. Turkey had one in 1980. They were common in Latin America and Southeast Asia.

Books have been written on how to stage a coup d’état. The basic rule is simple. Do it suddenly and with maximum surprise. If information leaks that you are planning a coup, you are likely to be arrested and shot. To avoid that, you must invent a reason why masses of tanks are going toward the capital, air force planes are preparing for missions and the leaves of soldiers are being cancelled. The reason of choice is that you — the senior officer who thought this up — ordered a surprise exercise to test the readiness of forces. If you are not senior enough to have the authority to plan such an exercise, you probably shouldn’t be planning a coup in the first place.

Having resolved to carry out the coup, lay out the plan and share it with as few people as possible who are loyal to you (good luck). Then, remember why it is called a coup. It is a sudden blow designed to overwhelm the sitting government. The first goal is to capture communication channels and shut them down. You need to get to the systems that permit phone calls. This used to be the telephone exchange but it has gotten more complicated. You should also take down all social media. Seize all TV and radio stations and place your own personnel in them. Having done that, seize all significant government buildings — but if you control communication channels, these buildings are as useful as warehouses.

The leaders — the president, senior defence officials, whatever ministry controls internal security and police function and so on – must be seized fast. Ideally, you should seize them on a weekend night and pick them up at home. If you plan to use some of these officials, then say it is for their protection. There are actually rules on how to carry out coups and if there are plans to bring them back, I’m going to write a book called “Coups for Dummies.”

The coup in Turkey started unfolding on late Friday night, the fashionable time for coups. There had not been even a hint of a coup in the public domain, so unless President Recep Tayyip Erdoğan’s security forces had been tipped, that part had worked. A few hours after the initial reports of tanks and low-flying F-16s in Istanbul as well as fighting in Ankara, the coup seemed to have slowed down markedly. There were still tanks in the streets, but the media was functioning and social media, which had been shut down in the first hours, suddenly resumed.

Most important, there was no report that Erdoğan was in custody. That struck us as odd because his location was well known. He was at the Mares Hotel in Marmaris. If we knew it, everyone knew it. He wasn’t hiding. We assumed that a hand-picked team was coming in on helicopters to take him into custody. Since coup plotters don’t provide play-by-play on their plans, we just assumed that was one of the first things done.

Finally, we heard two things that struck us and indicated the people staging the coup were in control. First, media outlets started going off the air. Turkish state broadcaster TRT was seized and its announcers were forced to read a statement prepared by coup supporters before being taken off the air. The newspaper Hürriyet also reported being seized and the staff were held as hostages. Second, and more important, the requisite proclamation of a ruling committee and a regime dedicated to secularism was transmitted on the seized stations. In the meantime, communications were locked down, we had to assume Erdoğan was detained and we were sure potential opponents had been captured. It seemed to us that the coup was heading to success.

Then, the bizarre happened. Erdoğan gave an interview to CNN Türk, which coup supporters had not succeeded in taking off the air (they did so only after the tide had turned against them). Indicating that all I learned about coups may not still be in place, he gave an interview through FaceTime using an iPhone. The president had not been arrested, the media outlets were not all under control and Erdoğan was speaking to the country. The assumption that the coup was successful came smashing down.

The question then was: how did the people staging a coup not coordinate taking all of the various stations at the same time? How could they not have arrested Erdoğan? How come all this was going on while there was no sign of armor loyal to Erdoğan fighting armor that was disloyal? If there was a countercoup underway, how come in one of the largest and most populous cities in the world, Istanbul, the coup forces were reported, but not the countercoup? Although there was some fighting in Ankara, where a helicopter kept firing at the parliament building, a failed coup usually involves a grim confrontation.

Not in passing, we had considered these questions from the beginning. Turkey has capable domestic and foreign intelligence, as well as military intelligence, and Erdoğan undoubtedly has his own network of loyalists. Given this, how was it possible to organize the coup without being detected? Erdoğan has always been aware of the threat posed by the military and in fact had previously arrested some military personnel for planning a coup. He is not careless. Unlike many countries, Turkey has professional and seemingly loyal intelligence services. How could the planners of the coup not have been detected? The best explanation we had (though it was pure speculation) was that the senior intelligence people were in on the coup.

The coup didn’t seem to end nearly as much as it petered out. At one moment, proclamations were being read on the air and at the next moment soldiers deployed in Taksim Square — the main square in Istanbul — were surrendering to police. Then, Erdoğan appeared again, now in Istanbul, calling on the people to pour into the streets to defend the government and also declaring that Fethullah Gülen, a Turkish Islamic scholar living in Saylorsburg, Pennsylvania, had planned the coup. Erdoğan demanded the U.S. extradite him.

We should pause and consider that, in this strange tale, the only thing that didn’t seem odd was the suggestion that an elderly scholar living in Pennsylvania was behind the coup. I have no idea if he was, but while Gülen was once an ally of Erdoğan, there was a significant rupture, with Erdoğan purging many of Gülen’s followers. The idea that Gülen’s followers had something to do with this is not inconceivable.

Following this, Erdoğan ordered the arrests of thousands of people. Arresting people after a failed coup is to be expected. But the list of people arrested – including Erdoğan’s top military aide Colonel Ali Yazici – was so extensive that it is difficult to understand how Erdoğan’s staff could draw up the list so quickly. It is as if the list was already drawn up and ready to go.

There are three possible explanations. The first is that the people staging the coup were completely incompetent. True, carrying out a coup is a lost art. But recognising the need to arrest the president doesn’t take a great deal of experience. They left Istanbul wide open to Erdoğan, and Erdoğan took advantage.

The second possibility is that the coup had been penetrated early on, that the president was under heavy trusted guard and that each step had been anticipated and dealt with by Erdoğan’s team, fully alerted to what was going on. The arrest list was drawn up because Erdoğan had the names of the people involved. In other words, Erdoğan knew about it and let it move ahead to failure to get a clear picture of who was involved and to justify a crackdown.

The third possibility, already being tossed about in the media, is that he staged the coup himself and orchestrated the appearance of a failure to give himself an excuse to purge the military and intelligence organizations. This also gave him an opportunity to create a confrontation with the US, which needs Turkey, over Gülen’s fate. He accused the US of at least passive complicity by way of alleging Gülen orchestrated the coup.

I don’t know which is the correct scenario and there may be a fourth and fifth possibility. But this is clear. For whatever reasons, the coup looked like the most incompetent undertaking imaginable. Erdoğan has emerged stronger than ever and can now arrest anyone he wants on charges of treason. Finally, emerging from this is a confrontation with the United States that appears to be about Gülen, but is actually a deeper question of regional power and how to exercise it. The question of what to do about the Islamic State will be at the center of future relations between the US and Turkey.